Monday 14th: We were all woken abruply just after midnight by a 7.8 magnitude earthquake. I immediately ran to Hezekiah who was on the top of his bunk bed and got him down. I then met Hannah in the passage and thought about getting them under her bed. It's far too low though, so I just got them to stand with me in the doorway. All this time Brendon was with Asher. The shaking went on for what seemed like ages. Our main concern however, was the electircity lines down the street. The wires were arcing and every time they touched they would spark. It was like blue lightening and really frightening. Thankfully we don't have an overhead line coming to our home, but the pole that our electicity does come from is close enough to the front of the house that if it fell in our direction, it would most likely hit our deck. So Brendon just wanted to get out of the house. So we headed out the back door and to the girl's container. All this while the shaking continued.
Rachel was so relieved to see us. She was also concerned by all the flashes and was concerned about us in the house. We were all so relieved when the power finally went off.
Once the shaking stopped and we had Hezekiah, Hannah and Asher on Ruth's bed with me, Brendon, Rachel and Ruth went back into the house to get some bedding. Ruth shared Rachel's bed with her, and Hannah slept next to Brendon on mats on the floor. I had the little two around me. There were a number of bigger aftershocks through the next few hours, but Asher and Hezekiah slept through them. The rest of us got a bit of rest. It felt so much safer being in the container with nothing that could fall down.
My first concern was how bad things were in Christchurch. Our natural thought was that the epicentre was there again. Brendon's phone however, updated him soon after the quake that it was 30km North of us. When I heard that I was so relieved. To know that the centre was closer to us explained why it had been so much worse. At that point I was relieved for Christchurch, only to hear later that many had been evacuated because of a tsunami warning.
Hannah was most traumatised by the earthquake. I was wondering if she would be willing to even come into the house in the morning. Thankfully she was. The power was out at first and so Rachel and I started trying to get some breakfast (french toast) cooked on the fireplace. It wasn't working that well, so we were very thankful when the power came back on.
School was obviously closed and I think that was the biggest challenge for me - not having the 3 hours of Asher at preschool as I had hoped. In the afternoon I wrote this blog post to answer the frequently asked question "How are you?" which will have more details. It was a hard day, but God was faithful through it all.
I was really thankful when Ruth went outside to play with Hezekiah. They made a very long daisy chain (first photo). While they were out there was a bigger aftershock. They quickly headed towards the house as they felt a bit unsure. I reasured them that if they were not close to the house, they were in fact safer outside - where nothing could fall on them. That encouraged them to enjoy being outside more and I was especially pleased when Hannah eventually joined them too.
Brendon and I split up overnight so that the children were sleeping next to one of us. This helped them feel more settled and we had a much needed night's sleep. 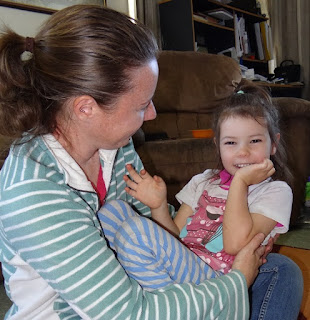 Tuesday 15th: School was still closed today. I was so very thankful to Lynda (Asher's EIE) who offered to come and spend the 3 hours with Asher at home so that I could get some jobs done. I wish I had asked Ruth to take some photos. Asher had a lovely morning with Lynda and I got so much done. It was such a blessing. And then just as Lynda was leaving, Dana arrived with her two girls. Hannah loved having them over for a visit and it was great for her to just be able to play and get more distraction from the aftershocks.
Asher was in a very good mood and was just giggling so much. Dana wasn't doing anything specific to get her to laugh, she was just in a laughing mood I suppose. It was rather cute though and she had me laughing too. 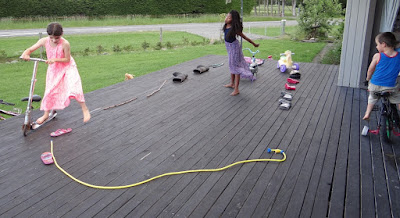 In the evening the children set up a race track on the deck. 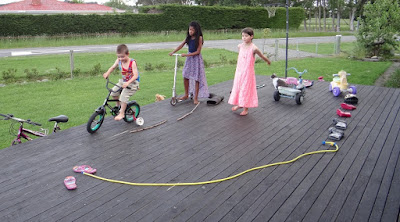 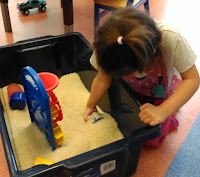 Wednesday 16th: It can be very tempting to just stay close to home after a big shake, but life must go on. So off I went with Asher to the Champion Centre today. She loved playing with the rice. I need to look into getting something like this set up for over the summer holidays when she doesn't get to go to preschool. 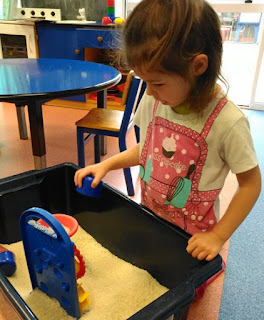 This evening she had a 1 min TC at 7:30pm, just before going to bed. Again such a relief with it stopping so quickly. 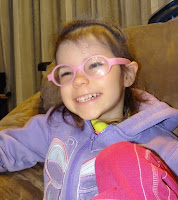 Thursday 17th: Asher's glasses arrived today. Now I just need to get better at taking photos of her so that I don't get the bad reflections all the time. :-)
The optomotrist was worried about how Asher would accept the glasses (because she was SO difficult when she was there). 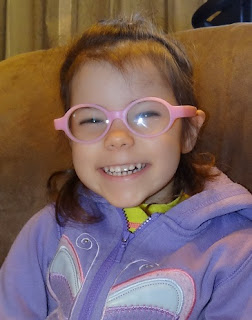 She has been a star though. It must be because they help her see, that she is just so willing to have them on.
NOTE after having them a couple of days: She only really ever takes them off when they are dirty - so that makes sense (they aren't helping at that point). As soon as we have cleaned them she is happy for us to put them back on. 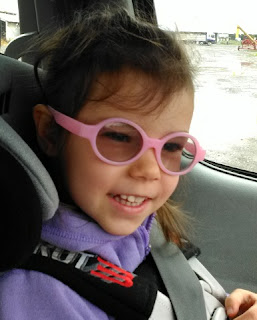 We went to the farm to fetch Rachel at lunch time and even though it was raining, it was still bright enough for her glasses to tint a bit. It's been really cold with the rain too, so I don't know how much swimming will happen this year, but at least we have her sunglasses sorted too.
Off to dance practice this afternoon and Rachel was thrilled to have her outfit to try on. She is just so pleased to have a main role this year.

Friday 18th: Proof that it is indeed cold. All that snow on the mountains again. 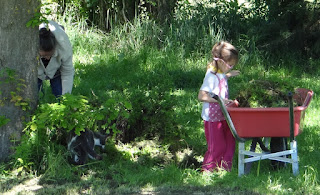 It's always such a blessing for me when Josie comes for a couple of hours on a Friday to play with Asher. I get some jobs done and Asher gets a nice change. Asher enjoyed being outside today and when Josie started pulling up some weeds, Asher went over to help load the wheelbarrow.
At 1pm she had a 1 minute Tonic. 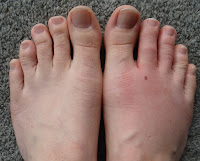 I got bitten by something while cutting the grass on Wednesday afternoon. My foot is still swollen and really sore. I'm not getting much sleep because of it too. I didn't need this added to the challenges of this week. One good thing that came of this happening again, was that I found some things that really helped. I use coconut oil with Lavender essential oil to help calm the pain. And then made a paste of coconut oil, lavender oil, frankensence oil, and clay. I put that on with a guaze and bandage and that not only helped with the pain but also with the swelling. I'm still not sure why Rachel and I react so badly to such silly little bites. 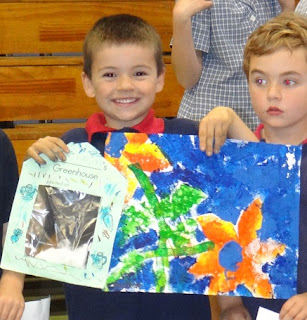 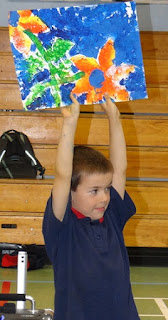 Up to the school for primary assembly this afternoon. Hezekiah smiling nicely for me as they showed their artwork. 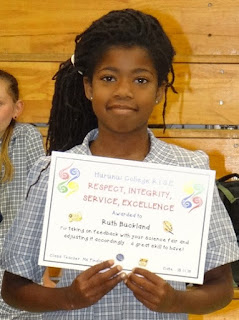 Ruth got a RISE award for "Taking on feedback with your sceince fair and adjusting it accordingly - a great skill to have!" 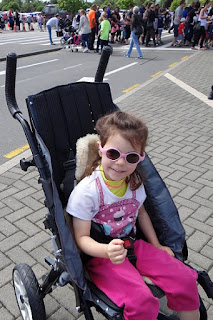 Saturday 19th: Ruth attended an overnight camp with a Guide unit in town from this morning at 10am. I came in with Asher and after dropping Ruth, we headed over to a special Christmas Pary for special needs children. I was thankful for her buggy as it gave her much needed "safety" in a very new, loud and busy enviroment.

I thought of Ruth when I saw these cars, so wanted to get a photo for her.

And all my older children would have loved all the Star Wars characters that were walking around. I quickly took a photo of this storm trooper before we went into the main hall. It was so busy in there that I could not even think of getting my caerma out. It was more a matter of just keeping Asher calm. They had a few food stalls, so getting her some hot chips helped to keep her "busy" while we walked around. They had a few huge vehciles for the kids to climb on, as well as a couple of boucy castles and face painting ect. 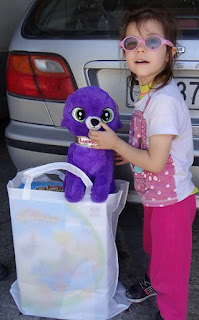 There were queues for everything though, so there was no way Asher would want to stay in a line for even a couple of minutes, even if she would have enjoyed the boucy castles. So we didn't hang around long. On our way out she got a soft toy and two lovely presents. I was glad we left a bit early, as the business of this area at the end of the party would have been far too much for her. I should have taken a photo of the mountain of Reindeer teddies they had. There were hundreds of them. The sponsors got to attend the day too, so they got to see the joy they brought to so many children. All the extra toys were then going to get loaded onto a helicopter and taken up to Kaikoura. What a great idea.
At 5pm Asher had a 1/2 min Tonic. It was so short that she didn't even need a sleep afterwards. 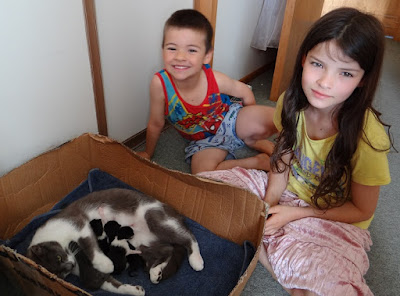 Sunday 20th: The kittens were born yesterday afternoon / evening. I took this photo on Sunday morning. I was devastated for Ruth that she had missed the birth. Thankfully Little Miss came to the lounge to give birth, so we were all around and got to watch and I got to take photos and videos. I took a lot more than I normally would have, just so that Ruth could watch and feel a bit more a part of it all. I will put all the photos and videos on a separate blog post.
Asher had a 1/2 minute vacant seizure at 7:30am. Thankfully again she didn't need to sleep, so we managed to still get ready to leave for church. At 4:30pm she had a 1 1/2 minute Tonic Clonic. So she has had a really rough weekend with one Friday, one Saturday and then 2 on Sunday.
Posted by Buckland at 10:00 PM