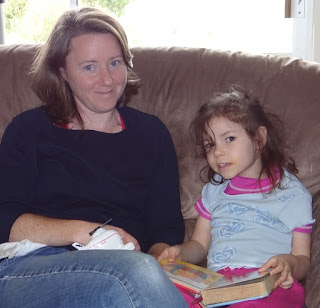 Monday 24th October: Over the weekend it finally dawned on me that Rachel's camp only finished on Monday (it being a public holiday), and Brendon was working on Monday. As it's a 5 hour round trip, there was no way I wanted to have to do that with Asher and the other kids. So I was so relieved when Dana said she could come over with her girls. She could then help Ruth with Asher, and Hezekiah and Hannah could enjoy the visit with their girls.
Just half an hour before we got home, at around 3:30pm, Asher had a 2 1/2 minute Tonic seizure which started while on the trampoline. I had forgotten to ask Ruth to rather keep her off the tramp. It was only later that Ruth pointed out that this was the first time Asher has had a seizure without Brendon or me around. So she did really well to keep calm and let Dana know what needed to be done.

At 6:30pm she had a 1/2 minute vacant seizures - so it seems very similar to Hezekiah's birthday with her on the tramp too. So we need to get her sunglasses out again and just watch this more closely.
I was pleased that Hezekiah and Hannah could enjoy the time with their friends. 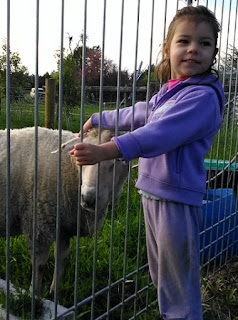 Tuesday 25th: I took this photo when I dropped Asher at preschool this morning. The sheep is so friendly and comes over to say hi to the children and they are able to wipe it so nicely.
Just before 5:30 Asher had a Tonic seizure that went for just short of 12 minutes. It's always unpleasant when they go on for so long. Thankfully she breathed beautifully through it. We are thankful she doesn't have these long ones often. 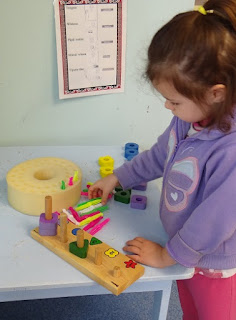 Wednesday 26th: Champion Centre this morning. Asher enjoying 2 games at once. :-)
Next year Asher will be moving to a "transition" class, which helps the 4 year olds get ready for school. It's scary to think she is less than 16 months away from being 5 and the age to start school. 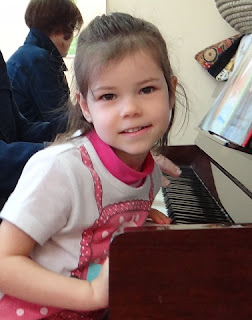 She always gives me the most amazing satisfied smiles when she plays piano with Ali. I could'nt get it today, but took this photo anyway. She does love her time with Ali. She loves that mirror wall in Ali's room too. I have tried to get photos of her dancing in front of it - but haven't managed yet. It's so sweet.

I happened to meet the lady at Champion Centre this morning who does the 6 monthly analysis (of the forms I fill in) so I asked her if I could get a new vocab one as I was sure Asher had added SO many words since her August assessment. 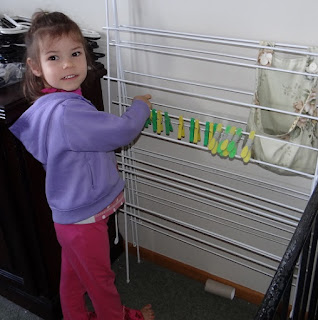 To put it in context, over the previous 6 months Asher had added 28 words to this list. I checked it again today and in the last two months (while going off the Epilim) she has already added 32 more words. In just 2 months!! It was wonderful confirmation of the amazing improvement we are seeing. She is almost adding new words to her vocab every day or two, so I limited doing the form to just today. :-)
While the others were at karate this evening Asher and I had some fun with the pegs. She enjoyed practising saying "peg on" and "peg in" when we put them back in the bag. Nice pattern practise too (with my help). 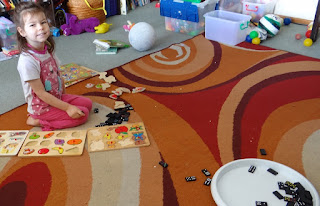 Thursday 27th: Asher does love throwing and she often takes the bag of dominoes and throws them as part of her double part game. So I decided to make it more constructive (and less messy) by giving her a tray to aim for. So the tray is now a part of the toy collection and she often sits building puzzles and throwing dominoes. 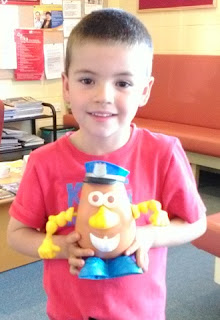 Hezekiah had a really sore ear today, so I took him to the doctor this afternoon. He has a middle ear infection, but with no fever, it is most likely just viral. So other than pain relief when he needs it, we will just try and get it cleared with some natural products. The doc explained that it might "burst" which will actually help him feel better. This did happen over night (I saw all the stuff on his ear and face in the morning). The doc just suggested we get it checked again about a week later to make sure it has healed properly.
Ruth had a long day today, leaving early for their Music Festival practice. The afternoon in town, and then the show in the evening. Rachel stayed home to watch Asher and Hezekiah, and so Brendon, Hannah and I got to go in and see the performance. What a treat. I will post all the photos and videos on a separate blog post. 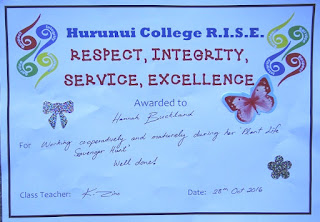 Friday 28th: Well done Hannah for getting a certificate at school today.

Saturday 29th: I didn't get the photo quickly enough - the back was all open a few minutes earlier. Brendon managed to fix my stove. One of the thermostats has been playing up again (overheating element) and so he just switched them around so that the faulty one is at the back (and so never used). It's so nice to have both front elements to use again. 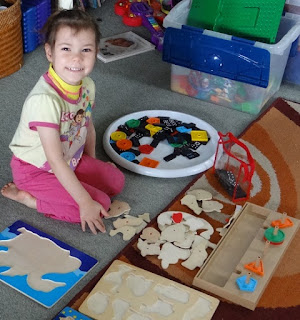 Asher getting 3 games going today. Puzzle building, shapes stacked and dominoes back into their bag this time. 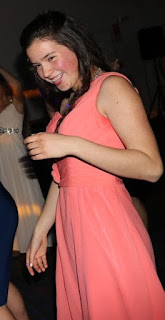 Rachel did her toe nails to the theme of the formal she is going to this evening: "winter wonderland". I dropped her off at the Love's this afternoon and they all got ready together. I was thankful she could get a ride with them and save us the trip all the way to town. It did however mean that I didn't get to see her ready (and therefore take any photos). Thankfully there were loads taken on the night, so we still got to see her all dressed up. I will post all the photos on Rachel's blog. 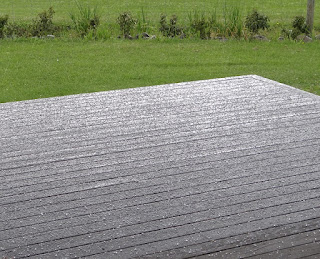 Around 3 this afternoon there was a quick hail storm. It's always so pretty to watch. Thankfully not too big, so hopefully it didn't cause any damage. 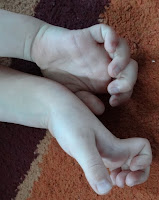 At 6:30pm Asher had a 1 minute Tonic Clonic. Her hands went really spastic with it (which was something new). Again we are thankful it was so short.
Posted by Buckland at 10:00 PM