Matariki, Hangi and a poi 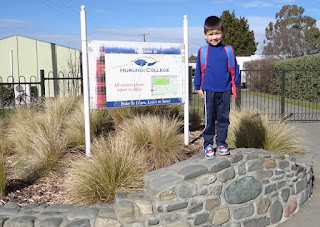 Monday 1st: Excitement for Hezekiah today as the preschool came to the school for the hangi at lunch time. This was a part of the Matariki Celebrations and it was really great that the school invited the preschool to join in. 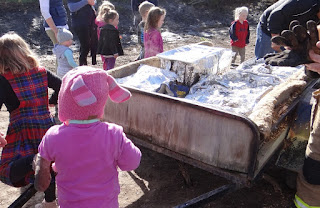 We were just too late to see the food being taken out of the pit. It was already all on the trailer. 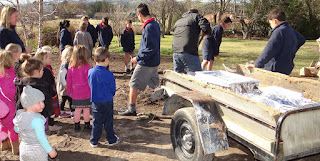 They did get to see them filling the hole up again. 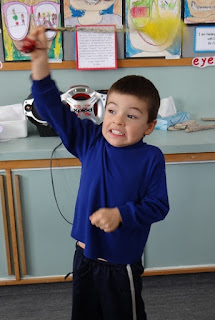 Then they spent a bit of time in Whero class where pois were being made. Hezekiah seeing for fast he could swing it above his head. :-) 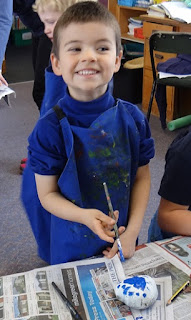 Then they went next door and joined those children with painting some rocks. The children had already painted a lot of rocks white - so the preschool children got to decorate one each. After this blue paint he added some red and made a lovely pattern. Well done Hezekiah.
It was also great for him to just spend a bit of extra time in the classrooms and getting used to the environment. I still can't believe it's just 2 months till he starts school.

I remembered to take a new children photo in the afternoon. 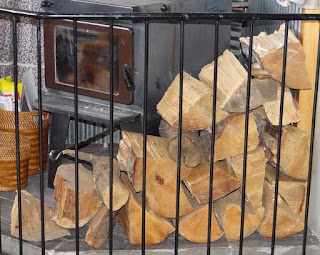 Tuesday 2nd: Rachel was a great help in getting the wood box (as well as outside the back door and at the fireplace) all stocked up for the cold week ahead. There has been a lot of talk about snow coming, so we wanted to make sure we were prepared (and didn't have to fetch wood from the big wood pile in the snow). 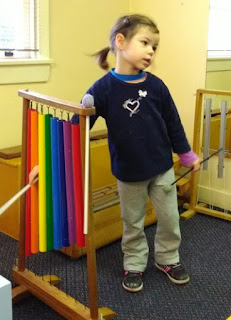 Wednesday 3rd: Asher played a bit with the chimes today - she normally just puts the sticks in the holes (you can see the one hanging there). 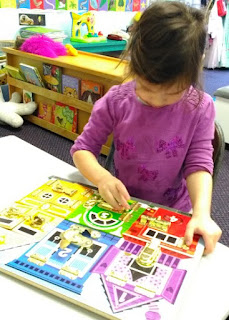 It's lovely to see her doing this door puzzle so easily now. I remember when she first started coming and didn't have an idea of how to "open" each door. It's always such a blessing to look back and think about how much growth and learning has happened.
Asher ended up being the only one left at the end of the morning, so we didn't have "group music" (as there was no group). 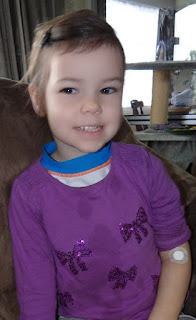 This ended up working well for us though, as I had to take Asher next door to the Burwood hospital to get blood drawn. I was so pleased that we could get the blood done here. They were really quick and although she screamed at being held, the prick itself didn't seem to hurt her at all.
I had seen our local doctor on Monday asking if we could get blood tests done to make sure Asher's body was coping with the medication (specifically the one she has now been on for 2 1/2 years). With my research over the last week I am convinced now that her autism is a direct side effect of the one AED. I have suspected it for months, but feel sure now. 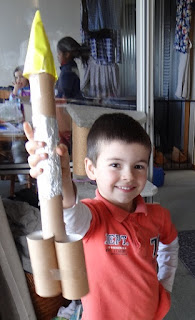 Especially when it's NOT safe to use in pregnancy because it has such a high chance of causing autism in the unborn baby.
Asher started this medication when she was just 1 year old. I think her brain was just not well developed enough to fight these effects. It's a terribly hard place to be in where you have a life threatening illness that if untreated - could very easily kill your child, but the side effects of the medication are huge.
PS: I got copies of the blood results in the post on Saturday and it doesn't look like there has been any damage to her liver. Although there were a few things that were a bit high on her CBC, there were no lower levels of things that have been known to be effected by this AED.

RIGHT: Hezekiah made this rocket at preschool today.
Posted by Buckland at 10:00 PM