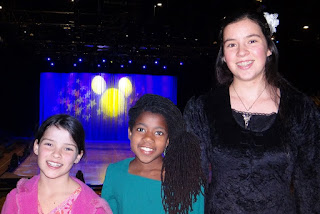 In June 2009 I took Rachel to watch Princess Wishes. I wrote about the surprise here. (If you want to see photo from that one - just click on Newer post at the bottom of this link).
Rachel still remembers the night so clearly and so when she saw an advert at the movies in March for Disney on Ice - she said she wanted to create the same surprise for Ruth and Hannah. So it's been a good 5 months of anticipation and finally the night arrived.
I made up a video with some of the many photos I took through the night (rather than loading 50 photos on here). Thankfully they actually encouraged people to take photos and share them (free advertising I suppose). Thankfully my photos are a lot better than 7 years ago. :-) (Note: We have bought all the music used in making the video.) 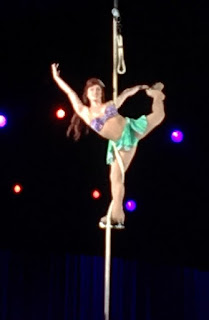 I did download this photo that I found on the internet because I was so focused on watching her that I didn't even think to get my camera out. It was amazing to watch her (and quite scary at the same time). I felt far more comfortable with the routines that involved her hand securely through that small loop. Movements like this were just too much for me - with nothing actually holding her but a rope twisted around her leg. And she was high up too. It was quite something. 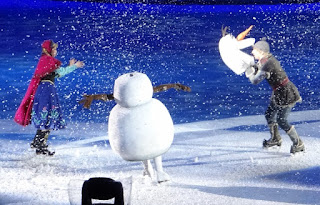 And a photo I will draw extra attention too from my video is this one of Olaf. They were brilliant in their costume design to actually allow his head to be taken off. Just brilliant.
Posted by Buckland at 9:00 PM