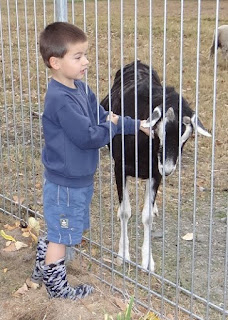 Monday 9 May: I headed down to the preschool with Asher again this morning. Hezekiah enjoys having me there to show me things. 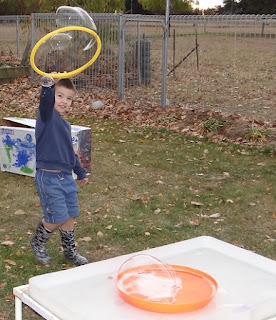 The huge bubble ring was loads of fun today. 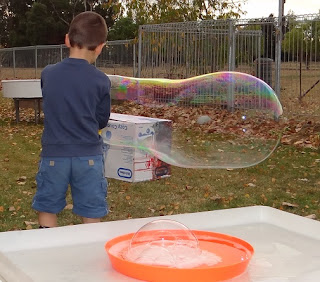 Hezekiah managed to work out what speed to turn around, and created this wonderful bubble.

I stayed through "mat time" and "kai time" (morning tea - kai is food in Maori). We had a small "meltdown" at kai time because when I brought the iPad out, she wanted to play the music that Hezekiah got playing on it this morning (10,000 reasons). With the wifi not connected, it wouldn't play, and she struggled a lot with not getting what she planned. Lynda got her distracted with play dough and squeezing that helped settle her well. 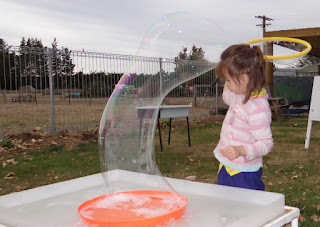 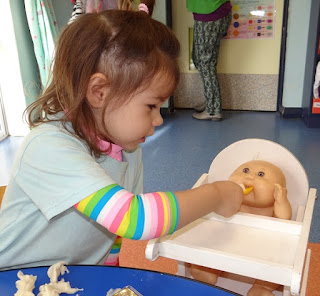 She came back to where the iPad was though - wanting her music and getting very upset again when I said no.
One of the teachers then got some other music playing and a few children started dancing with ribbons and that distracted her. I then headed off (with the iPad) and the rest of the time went fine. So even though it wasn't a great morning, I was pleased a little "issue" came up. It gave us all the opportunity to think through and discuss how to handle times like that. So a very positive morning.
Asher had loads of fun with the bubbles too. She often wants to blow bubbles, but it's just too hard still. So this was a great solution. No need for blowing.
Wednesday 11 May: Feeding the baby some play dough on a spoon. It sounds so simple but this is such an accomplishment for Asher. She actually brought the high chair and the baby to the table. Imaginative play is not natural for Asher, so this was really encouraging to see. Emma is so creative with ideas in the play room for Asher and it's great seeing the results of her effort. 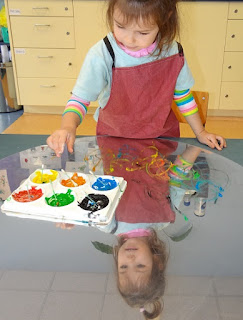 The shaving cream was cleared up before Asher had her time in the play room today. The last time she had loads of fun but seemed to react to the strong smell. She still got to enjoy the mirror though. This time with paint and ear buds as brushes. Once she was done Emma took a "print" of her creation and it looked great. I will collect the artwork next week and post photos of them all in one post. 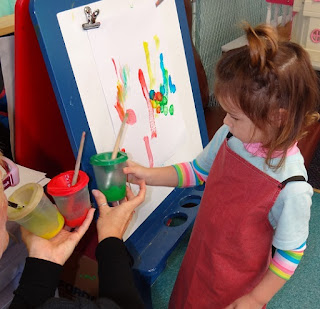 We had a huge breakthrough with the paint today too. Emma had shown Asher how to put paint on her hands and then make hand prints. That has stuck with her and she does it every time. She did start with that today, but then for some reason decided to pick the containers up and give them to Emma. Then she would take them back (putting them into the slots) and paint dots as part of the routine. She even changed it up, and sometimes painted the dots as she gave them to Emma, and other times when she was taking them back or only once all the colours where back. It was just wonderful to watch. Up till this point Asher has only painted lines and done hand prints. So for her to come up with something new and then also create variation in her new routine was so great to see. 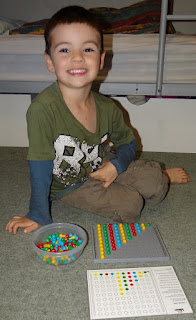 Wednesday morning was rather busy as Ruth and Hannah headed off for a school camp. I leave with Asher at 7:45 to get to Champion Centre and I had the girls all packed and ready so that I could drop their bags off at school. After discussion they decided I could just drop them off then too (a full hour before they needed to be there). I knew the teachers would be around and Ruth wanted to offer to help. I think it was also nice for her to not have to wait the hour at home as she was very excited about the camp.
It helped Hezekiah that he had Preschool on Wednesday and so he didn't miss them too much. I also remembered some educational games that I had that have been out in the garage for ages. So he had a great time playing with those. Asher enjoyed them too as she got to play with them with Josie on Friday morning. She especially enjoyed this peg board. So much so that it became one of the toys I decided to use for Sunday (more on that later). 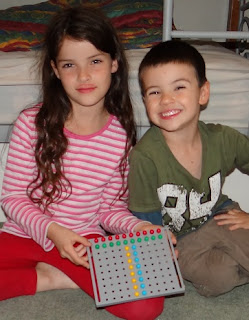 The girls were back at 3pm on Friday afternoon. They had a great camp and it was lovely to have Hannah and Hezekiah playing nicely through the evening. I had sent food with for the girls for the camp, and so although tired, it was nice to have them home and not grumpy from having eaten "off plan" food. It made the effort in sending food with, worth it. 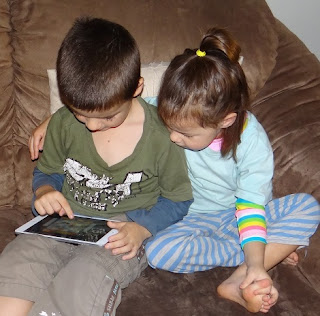 Saturday 14th: So cute. Hezekiah often sits and plays on the mini while I make breakfast. Today Asher went to watch what he was doing. I just love how she had her arm around him. And it wasn't by chance. At one point she clapped for him and then the arm went back around him. Too precious for words. 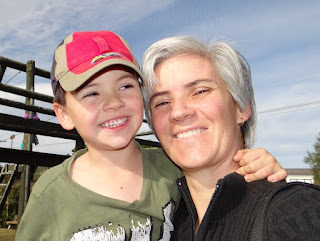 A couple of weeks back I helped Brendon offload some firewood and hurt my back. It got worse through this week and when I saw the physiotherapist on Friday she said it is most likely a disk injury. She gave me a lot of excellent advice on how to look after it while it heals, but that meant no playing with Hezekiah at the park today. I explained this to him and he said it was fine. He still wanted to go with me. He had a great time and chatted away the whole time he was playing. Thankfully there was another boy at the park with his sister, and he offered to pull the flying fox up for Hezekiah a few times. 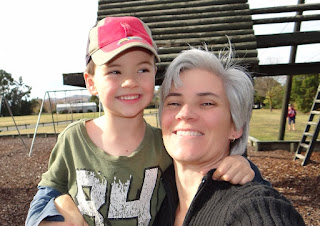 So even though he didn't expect to go on the flying fox, he had a few rides anyway. So that was a nice bonus.
He didn't even mind that I couldn't have a pretend game of tennis with him. He said he would ask his friend "Bluie" to come and play. He ended up not getting the tennis match though as the children's father came by with a dog and Hezekiah enjoyed playing with the dog a bit and chatting to the dad. By that time we had to head home for lunch. 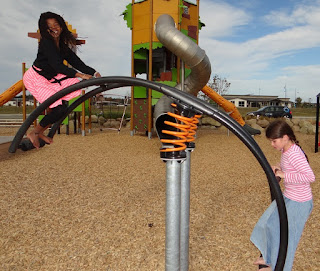 Sunday 15th: I thought I should have taken a picture in church of Asher. I was so pleased with how it went today. Instead of bringing her pram with, we brought a high chair. This allowed her to have a table to play on, and I had a bag full of fun fine motor games for her to play. She had so loved the wooden fruit pieces that you "cut" at Champion Centre, that I bought her a set and it worked wonderfully (that was what she spent most of the time playing with). She also had some magnet "stix and balls" as well as the peg board and her set of small books. She sat for a full 30 minutes! Compared to last week where she didn't even last for 5 minutes. 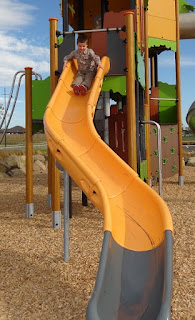 It's so nice that Brendon and I can sit together for this time at the start of the service. I was so thankful for the success today. My plan is to keep these specific toys just for church, so that she has something fun to look forward to.
On the way home we drove past a couple of parks closer to town and when 3 of them didn't work out as good options, I suggested the park at Pegasus. Rachel, Hannah and I had driven past it in January when we went to visit Ruth at Jamboree, so Ruth had no idea why Hannah was so excited. It really is the biggest park I have ever seen. There were a few other families around, but still plenty of space for all the children. I thought the "seesaw" above was a brilliant design.
Hezekiah wasn't brave enough to go down that huge slide behind the girls, but he did enjoy the small and medium one.

Asher went on the small slide a bit but then spotted the water. Thankfully this "grass" hill gave her something else to do, as well as chasing the seagulls to try and say hello to them. She did keep wanting to go to the water though which made it a bit difficult. 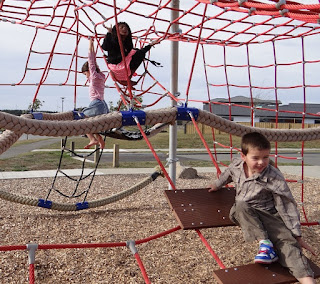 It was also very windy. The children did get a good play though before we headed off.
I love that every week they ask to go to the park that we went to the previous week because it's "the best". I have said that we will rather go to different parks, and eventually once we have tried quite a few, they can choose ones to re-visit.
Posted by Buckland at 10:00 PM