Seizures, triggers and some fun 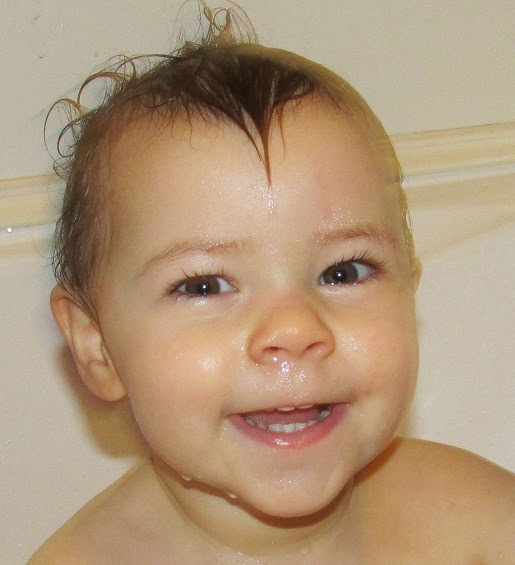 Sunday 21st Sep. We were home for lunch today and just after lunch Brendon took Asher outside for a bit of a play before her nap. While they were outside she had a seizure. Ruth was close to her and noticed the change in the sound of her breathing. She got to her as she went down onto the ground. Brendon quickly got her inside. Her breathing wasn't great and her lips when a bit pale. Thankfully it was only 2 minutes. She was due for a nap - so had a good sleep.
She had jerked "once off" in the morning and I had thought I would give her a bigger dose of her meds that night. The seizure confirmed she needed that bit extra. We are wondering if she has had the seizures now on both Sundays because of the extra playing and activity of the Saturdays - having Dad home to play with and also just more playing happening with the older girls off school. So the plan for now is to give her a bigger dose on the Friday or Saturday evening - to help her cope with that extra activity.

In the evening she had a bath with Hannah. Hezekiah was in at the begining but has sort of "gone off" baths at the moment, so didn't stay in long. So Asher had extra space behind her (and no brother to wet her hair) so she went backwards over her chair to get her hair we. 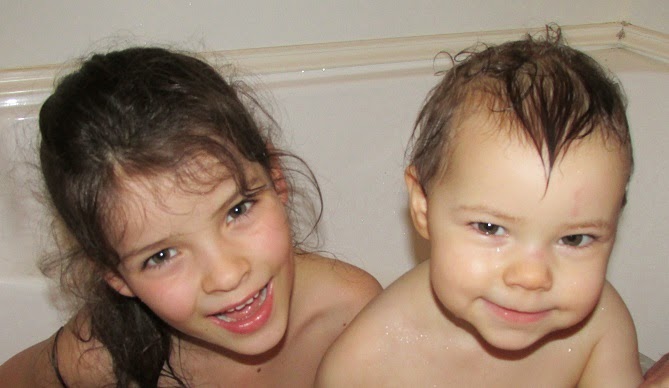 Brendon decided to let her have some time out of the chair and she had a ball. She even put her face forward into the water.
Above right: Hannah wanting a "funny face" photo.
Left: A nice one with a smile too. 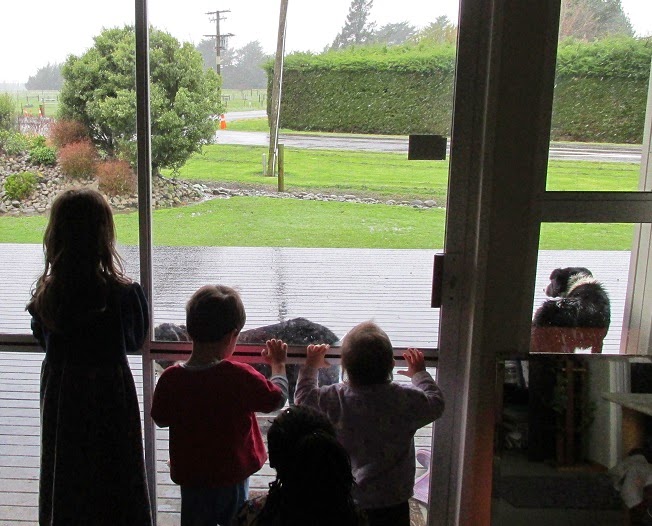 Monday 22nd saw the children enjoying the change of weather. We had rain, hail and a little bit of snow too. 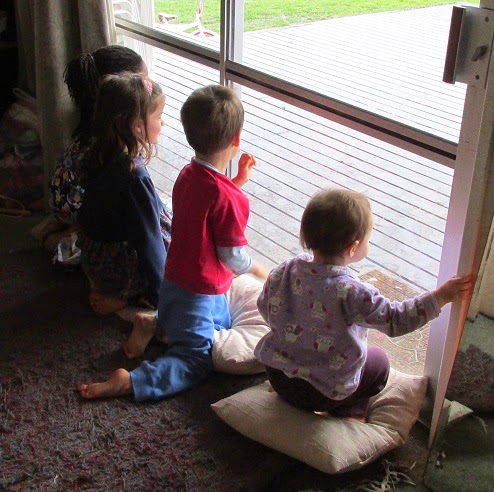 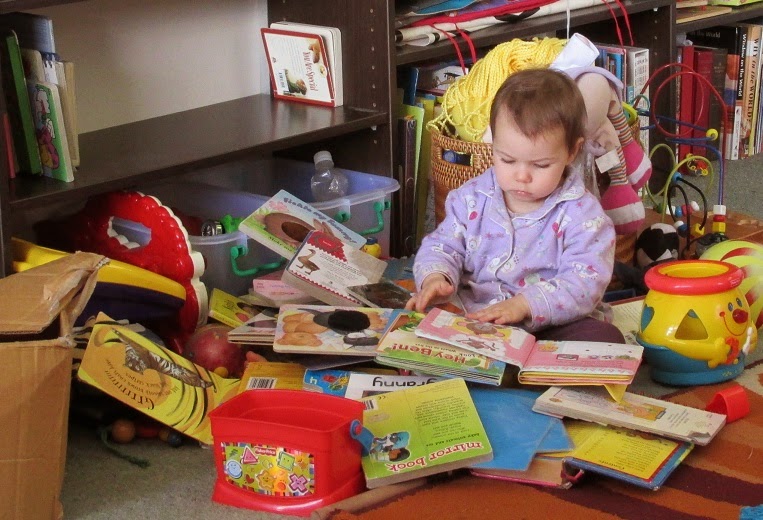 I love watching Asher with her books. She unpacks the entire shelf and always looks like she is searching for something very specific. 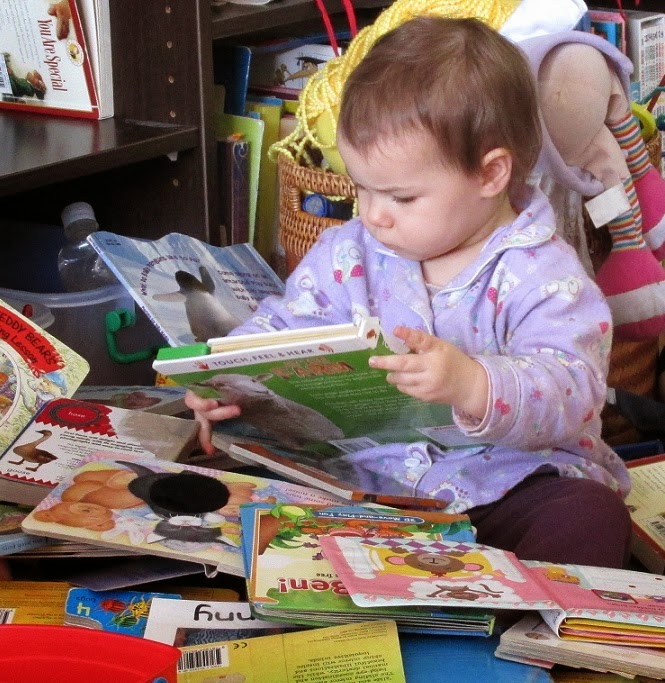 So much intensity in her little face.
This morning Ruth made some Lemon and Poppyseed Muffins for an order she received. She decided to taste the Lemon Essence and licked the spoon she had used to measure it. 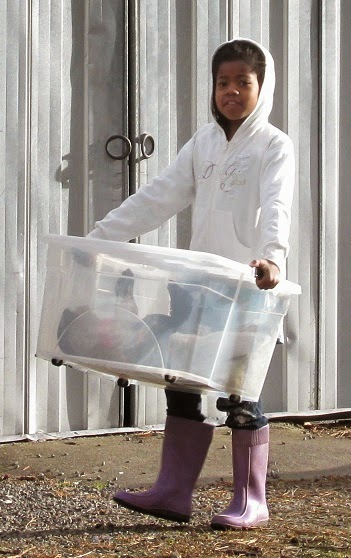 She had a nasty allergic reaction to it though and got big bumps on the back of her tongue. She also said it was tiring to breath (and couldn't take a deep breath). I phoned the poison line and got some advice. I remembered I had this asthma pump and spacer from an incident years ago - and so decided it was best to help get her breathing more easily. It worked really quickly and I was glad when she said it had gotten easier to breath.
I was also thankful that Ruth did not stress out. She stayed calm and if anything I needed to keep asking questions to find out how she was doing.
Monday also saw us finishing the last bag of chook food and so the day had come to give the chooks away. We had discussed it over the last couple of weeks and decided that having just the 3 chooks was just more work than reward. We go through 30 to 60 eggs a week - so we would never be able to have enough chooks to meet our needs. We are thankful for a neighbour who has a number of chooks who are free range - and we get at least 30 eggs from her every week. 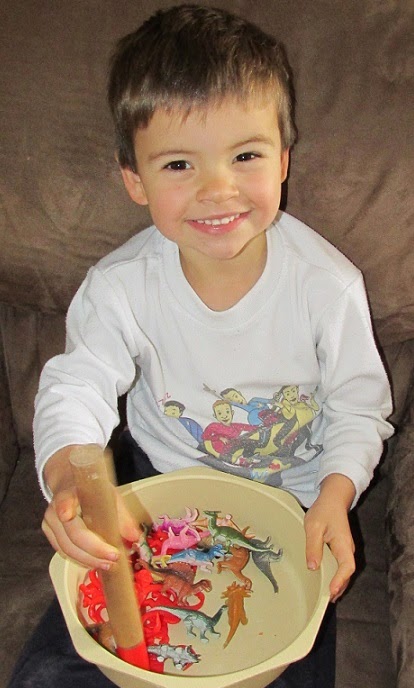 Tuesday 23rd. I thought I should take a photo of Hezekiah because this is almost an every-day-play. He makes "food" for Dad and it always needs to be this specific bowl, the barrel of monkeys, his collection of little dinosaurs and even the red alphabet stick. He stirs the food and always says it's for Dad. 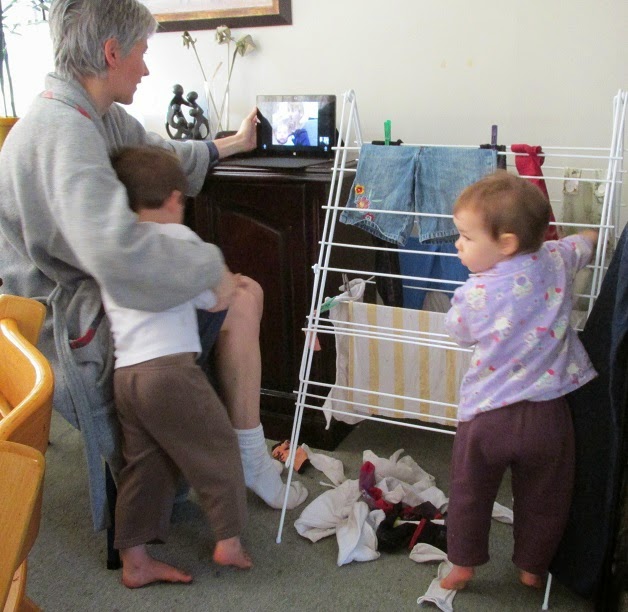 Wednesday 24th. We got to have a chat with Graham in Germany this morning via Skype. It was good to get to chat through a few questions we had about our upcoming Germany trip.
At first Hezekiah was really shy but then Graham got little Michael (their 4 month old cousin). That helped him relax and he started chatting away. 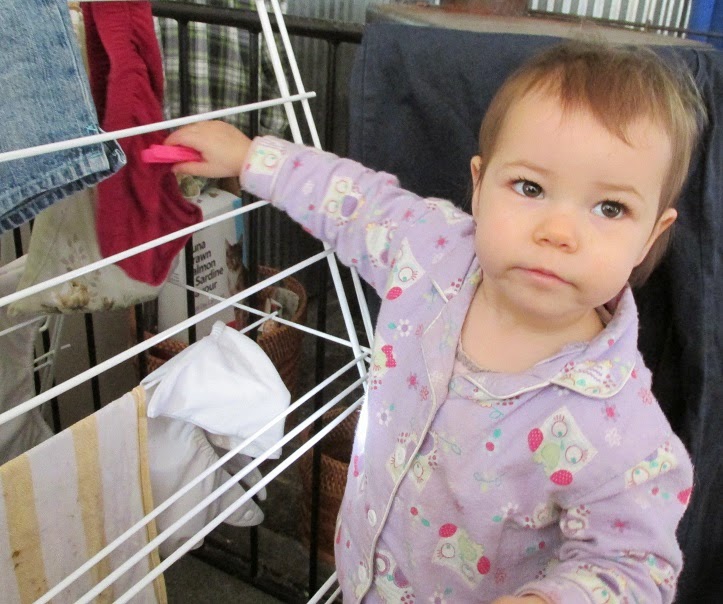 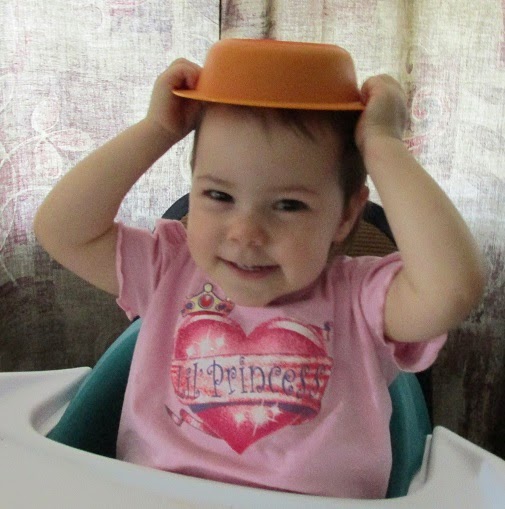 Asher kept herself busy by taking all the washing down. Thankfully it was all dry. She has gotten really good at getting the pegs off. She always loves helping me with putting it up and taking it down.
Left: She had fun this afternoon with the bowl that her afternoon tea was in. It became a very cute hat. :-) 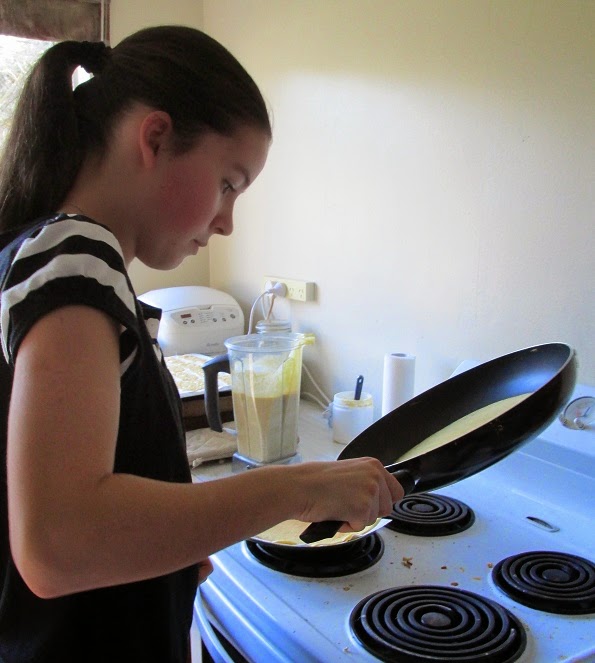 Rachel has discovered how delicious our wheat free "pan bread" is with cinnamon and xylitol (just like a pancake with cinnamon and sugar). So she has agreed to help with making them. It used to be just Brendon and Hannah who would eat these - but now everyone but Asher is enjoying them - so we need to make a batch almost every day. They are not grain free as we use oats made into flour. Added to that home made cream cheese and eggs, salt and baking powder. Simple but delicious and so full of wonderful protein. 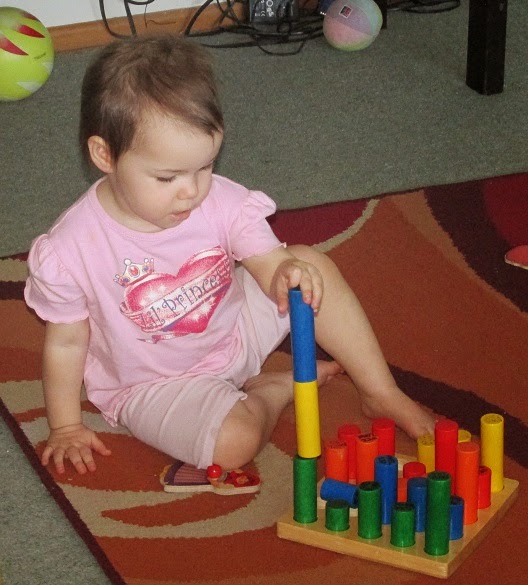 Asher loves stacking anything. She did really well with these. 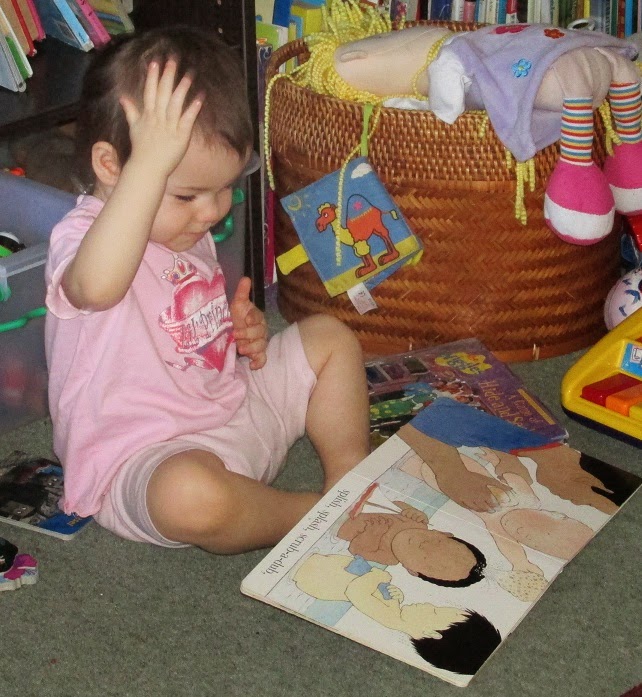 She has a favourite book and knows it off by heart. It's so sweet to see her page through it doing the actions we do with her for each page. She loves the "Gently gently brush your hair" which was the next page - but I asked her to do it so I could get a photo. :-) 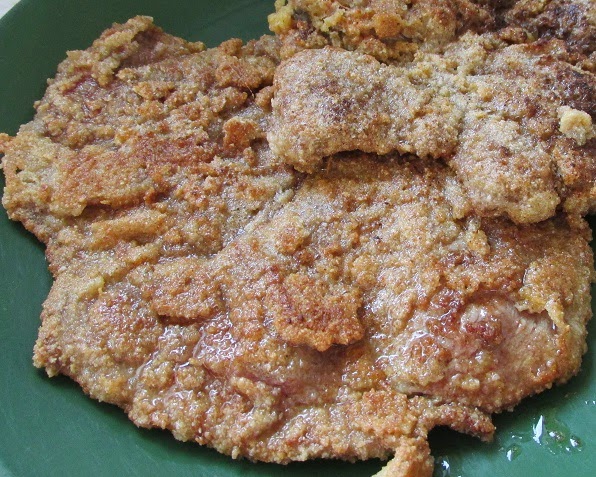 We had grain free crumbed beef sschnitzel for dinner tonight. It was delicious. I crumb our fish like this now - with psyllium husk, almond meal and a bit of parmesan cheese.
After dinner Asher was rather tired and so we took her outside to throw the ball for Zorro (something she is always thrilled to get to do). It had gotten rather cold though and she was still only in her t-shirt and shorts. I was just going to get her more clothes when the dogs started chasing the cat and we ended up being out there much longer than we intended. 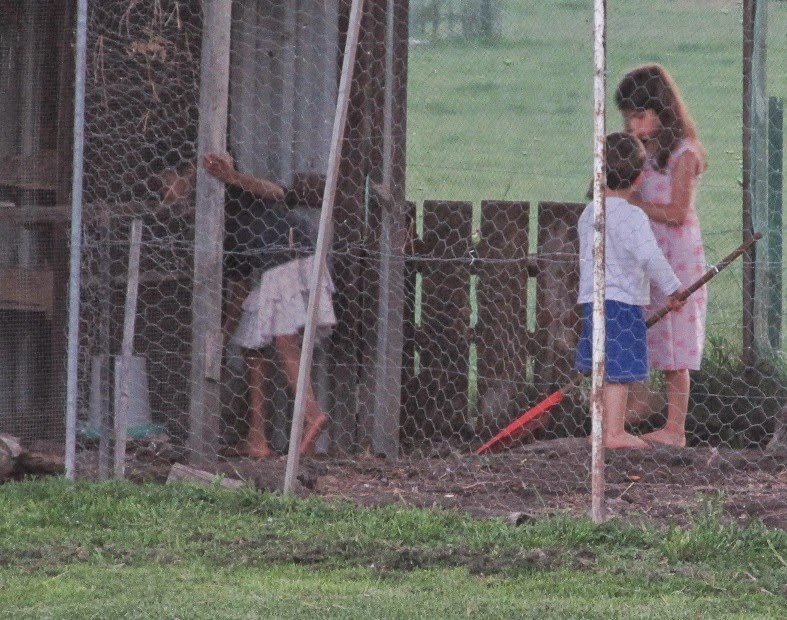 I had just said we had better get her inside (because of the cold) and she had a seizure. It was one of those that start with a shout and Ruth said it was the first one she had gotten to hear. Thankfully it only lasted just over 2 minutes. We think the "being tired and cold" is perhaps another trigger as it's happened before - so we will just make sure we are more careful of this in the future.
Left: These three didn't seem to mind the cold and they headed back out to carry on cleaning out the chook area. This has become their new play area and so many fun games are being created.
Posted by Buckland at 10:00 PM