May done and dusted with snow 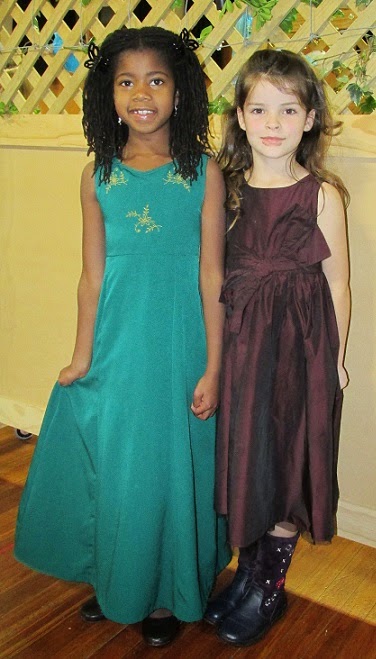 Saturday 17th we got to go to a 50th birthday party. It was the first time we have ever gone out as a family of 7 and I was surprised at how well it went. Asher did get to sleep in the sling on me but the big issue was Hezekiah. He managed so well - even though he was up over 2 hours after his normal bed time. We all had a great time. The girls were excited about having an opportunity to wear their "fancy" dresses. This green dress Ruth is wearing was made for my little sister Michelle when my older brother, Craig, got married in September 1999. 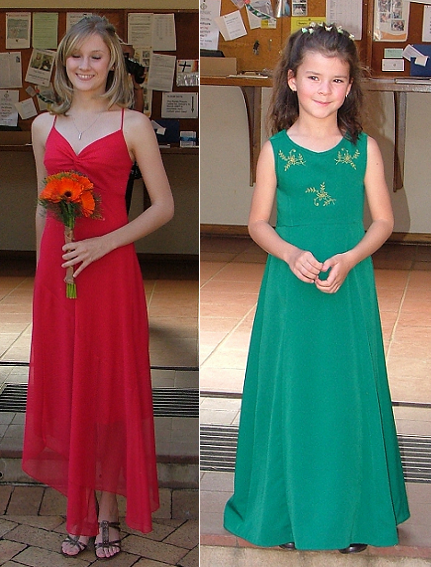 Rachel got to wear it to the middle sister, Gillian's wedding in May 2007 (7 years ago - a few months before Ruth was born). Pictured on the right: Michelle (the original owner of the dress who was then 17) with Rachel - age 7. Lisa is going to try get some of their wedding photos scanned in. It will be nice to put a picture of Michelle in the dress on here too. She was 9 when it was made for her. The dress was shortened a tiny bit for Rachel.
Hezekiah has been complaining of having a sore tummy lately - so I took him to the doc on Friday afternoon to just make sure there was not something obvious causing it (which there isn't). 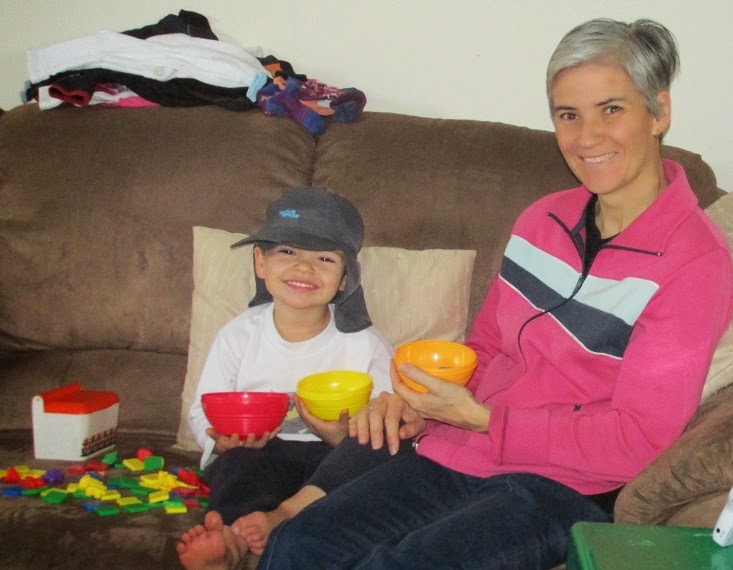 Brendon was home with the rest of the children and it felt quite strange for me to be out with Hezekiah all on his own. It was special being able to hold his hand and get some one-on-one time chatting with him. It made me realize that he is actually old enough now to start being included in the weekend "parent-with-one-child" outing that the older girls have been having for a long time now. So I have made sure I get some time playing with him (on his own) at home too. We have been having loads of "food" together and I have been enjoying having him cuddle up next to me and make me some "tea". 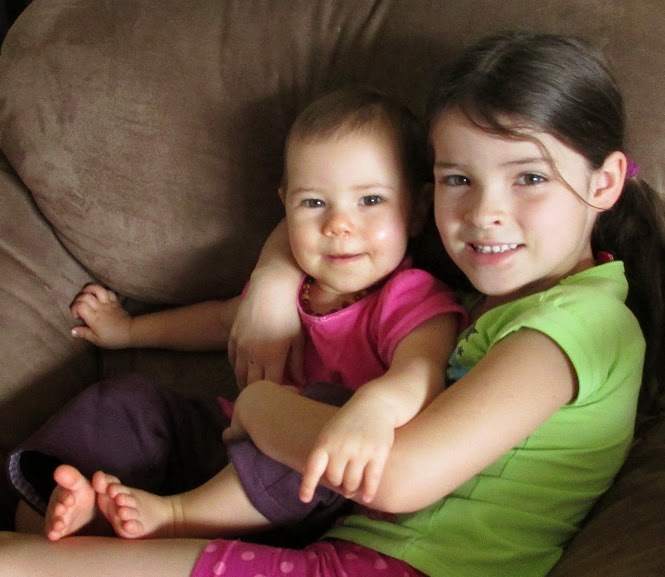 Above: Tuesday 20 May. The other thing I have enjoyed is Hezekiah's love of the sunrises. I always make sure I get him to have a look when I spot a beautiful sky and he is always so excited and tells me all the colours he can see.
Left: I love downloading photos off my camera and seeing shots taken by others. This one is one of those. A lovely one with Asher and Hannah. 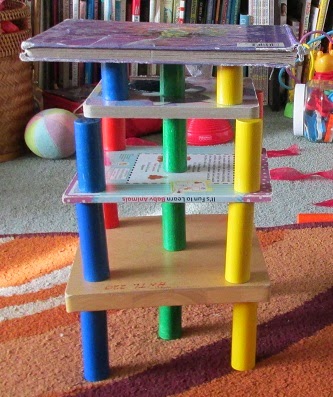 Another of those shots was of this "tower" that the children had made for Asher to knock down. :-)

Wednesday 21 May: Asher has learnt how to blow on this toy trumpet. 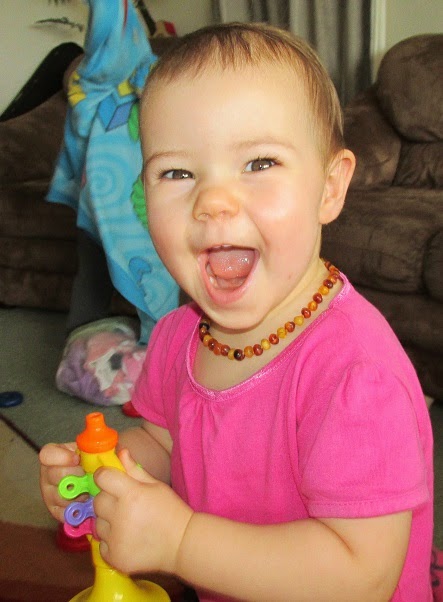 And she thinks it's wonderful. :-)
Such a cutie. 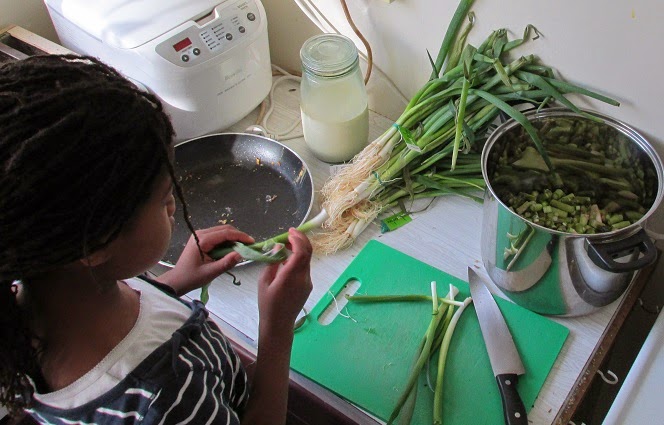 Ruth was thrilled to be allowed to make our asparagus and spring onion soup today. She did most of the chopping and Rachel and I just helped out with some of the onions once her eyes were a bit too sore. She really does love working in the kitchen. Although Rachel and Brendon don't like asparagus - we were given many bunches of them and they thankfully both really enjoyed the soup. Rachel and Ruth had so much fun planning the menu for dinner tonight and even writing out the menu for Dad to read when he got home. 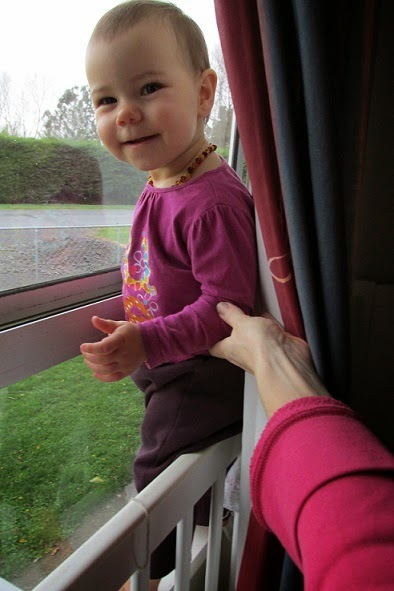 Above: Friday 23rd. What a windy day today. It really was blowing gales out there.
In the afternoon Asher discovered that she could use the window sill and window to climb out of her cot. I found her sitting here on the side of the cot with the window just opened. What a busy afternoon I had making sure she didn't fall out the window. What a little monkey she is. Eventually on Sunday afternoon after she had climbed up there 3 times in less than 10 minutes - I realized we had a sliding door on the laundry that we never close - so Brendon took that off and we put that between her bed and the window and I could get some peace. We had obviously thought about every other way of arranging the room - but there is just no other option. So I am pleased we came up with a plan to keep her safe. She was oblivious to any danger and just thought it was the greatest game out. :-)

We had needed to look at a better kennel for our dogs and were so thankful when our neighbours mentioned that they were building permanent kennels and would be selling some old ones of theirs (old to them but still in excellent condition). So later this afternoon this lovely kennel got brought over. 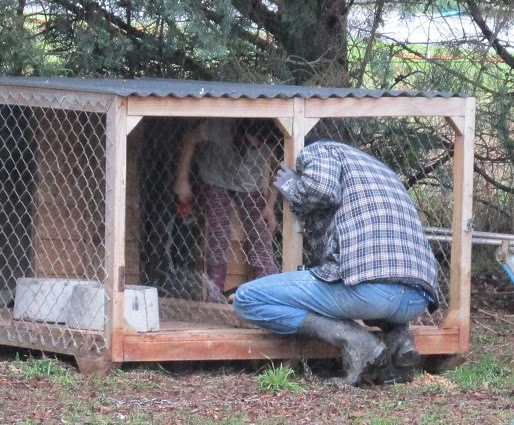 On Saturday afternoon Brendon went out to get it sorted specifically for them.
Hannah was Brendon's helper (thankfully with her being inside the kennel she didn't even get wet).
He took some of the mesh out of the middle so that their water and food bowls could sit in the middle and be accessed from both sides. There have been times when we have wondered if Zoro has stopped Shadow from eating (as he did for a while when they were puppies) but this will ensure that they can both eat and still have some of their "own space" if they need it. 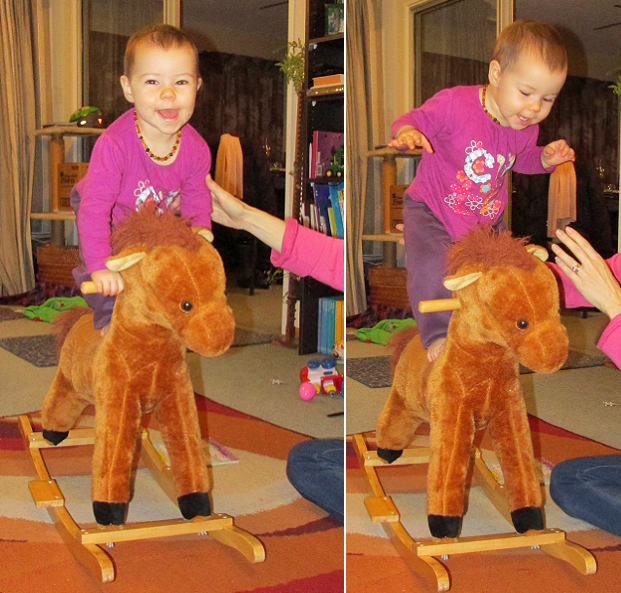 This afternoon Asher decided to show me how much of a little monkey she really is. She has enjoyed riding on this rocking horse for ages but today decided that she wanted to stand on it's back. I called Rachel to get a photo and just to show off - she stood right up and let go. A real circus clown. :-) 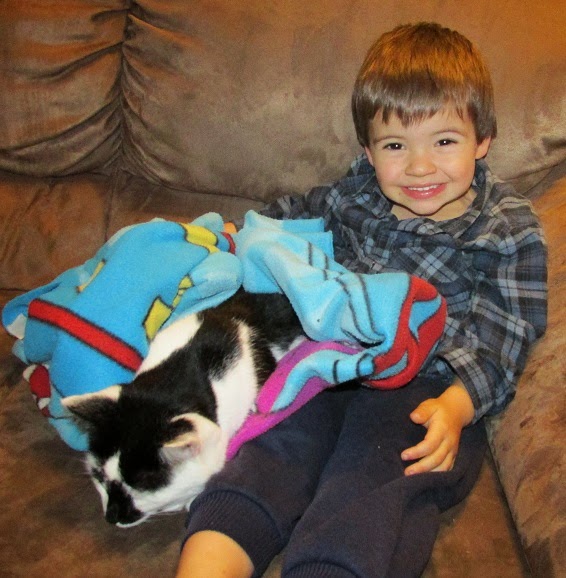 Sunday 25th. Over the last couple of months Hezekiah has been showing lots of affection to Patches. He especially likes putting his blanket over her and "keeping her warm". 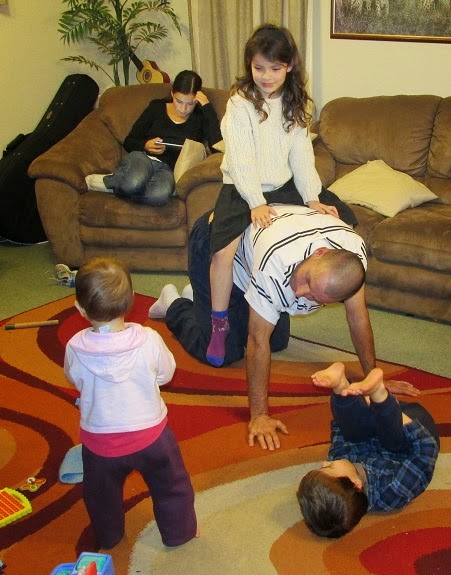 Some fun and games to end off the weekend. :-)
Monday 26th. The day started off nice and clear but during the morning the clouds came in and brought freezing weather. The girls quickly headed out to bring some extra wood to the wood-box at the back door and while they were out there it started to snow. Not a lot - but enough for me to hear squeals of enjoyment from Hannah. Not long after it was a clear sky again and then later a bit more rain. So just a dusting of snow for us but a good bit on the mountains which will make the next few days that extra bit cold.

Tuesday 27th. Our neighbour Val took this photo on Tuesday morning. Often after a snowy day you will get such a beautifully clear one. And she captured this morning so magnificently. It was -5 degrees out there - so a really chilly start to the day. 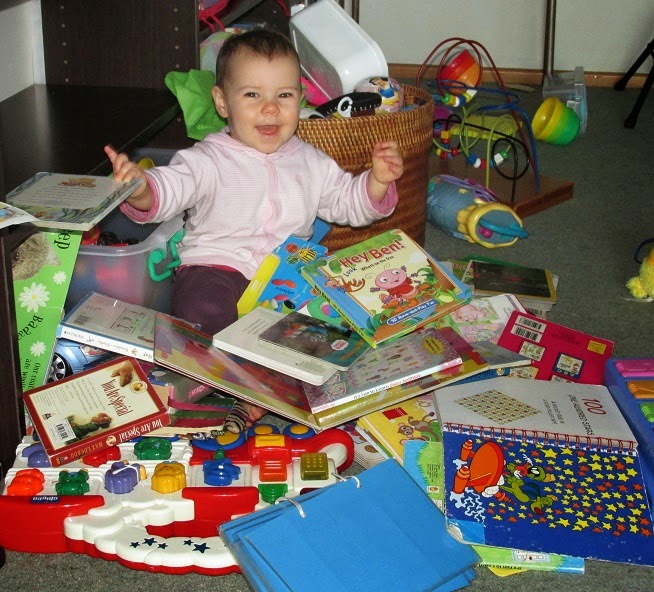 Brendon took this photo of Asher while I was out with the older girls taking them to ballet. He said she diligently looked through each book as she took them off and happily piled them up around her. :-)
The girls have orchestra practice on a Wednesday at lunch time. Rachel is on violin and Ruth and Hannah are playing recorder. Hannah only has a few notes to learn - but it's great that she is being encouraged to give it a go.
Thursday is work in the morning for Rachel and then Music Festival practice just after lunch. So it's rather busy with her eating her lunch as we bring her home, then a quick shower and she heads up to the school on her bike. Then Brownies in the afternoon for Ruth. So before we know it the week is over.
Friday I will put in a post of it's own as we had a wonderful day together as a family (and I took loads of photos). 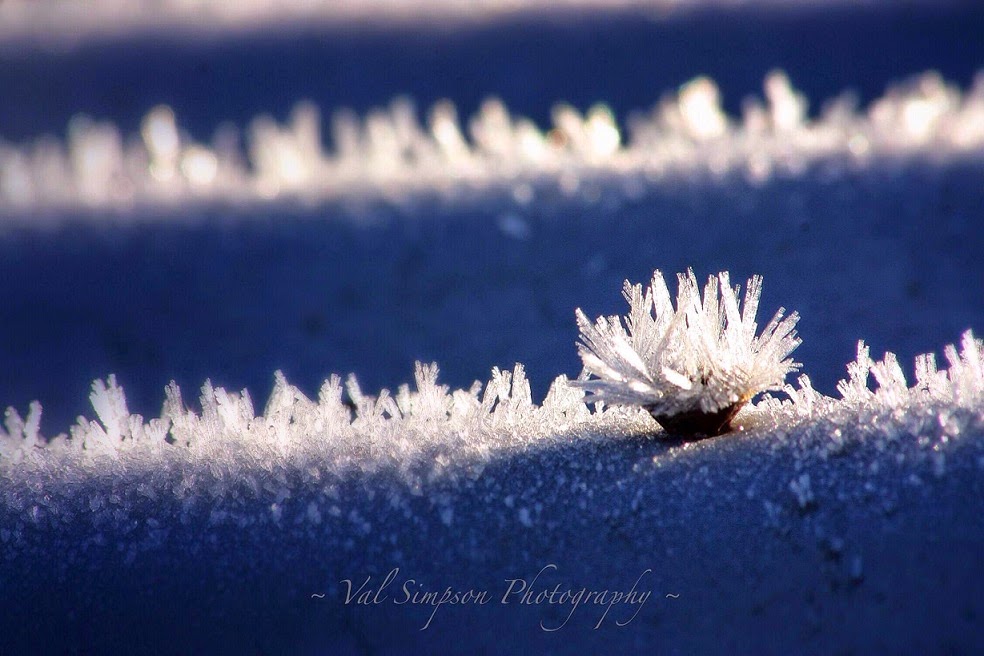 Saturday 31st May. A clear and icy start to the day. Isn't this a beautiful photo. I can see Val is enjoying the beauty that this season brings. 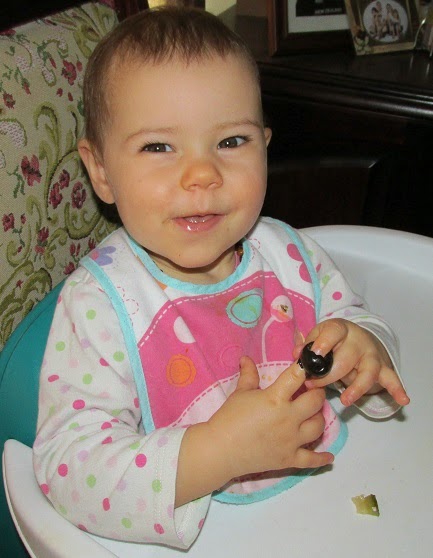 Brendon got to see Asher eating olives in her "normal" way today. I don't know when this started but she has so much fun sticking her finger into the whole before it goes to her mouth. I think she spotted Hezekiah doing it a little while ago. 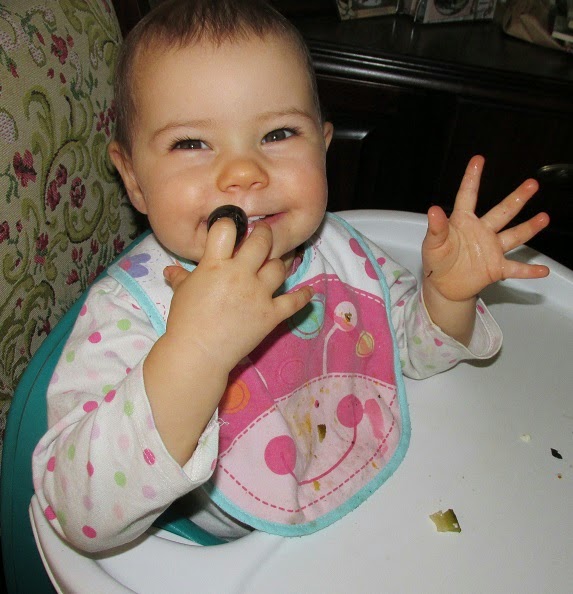 The 4 younger children all love olives and I limit them to 4 a day. They would all happily eat more. Ruth has now told me which the preferred brand is (as I would just buy whatever was on special). So when their favourite is on special I now try to stock up. :-) 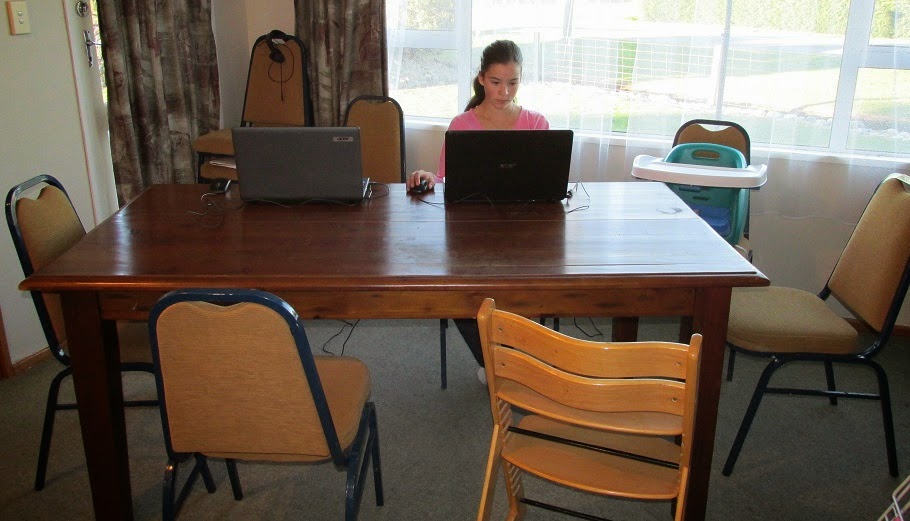 Brendon and Rachel headed into town today to pick up our "new" 2nd hand dining furniture. Our current set is too high for the children to do their work at - and it's too fancy so has become such a chore to keep protected and clean. So in an effort to reduce stress and help with school - we have "downgraded" to this. We are all happy with it and it was lovely to see the children's excitement with the "new" table. Eventually we would probably like to have a bigger one made - but for now this was a nice cheap buy and got our school area issue sorted quickly.
Posted by Buckland at 10:00 PM