Half way through May

Thursday 1 May: We are so very blessed to call New Zealand our home. Nothing like a drive in the countryside after some snow to remind us of how very blessed we are. This was only a minute from our home though - we live in the "countryside". :-) 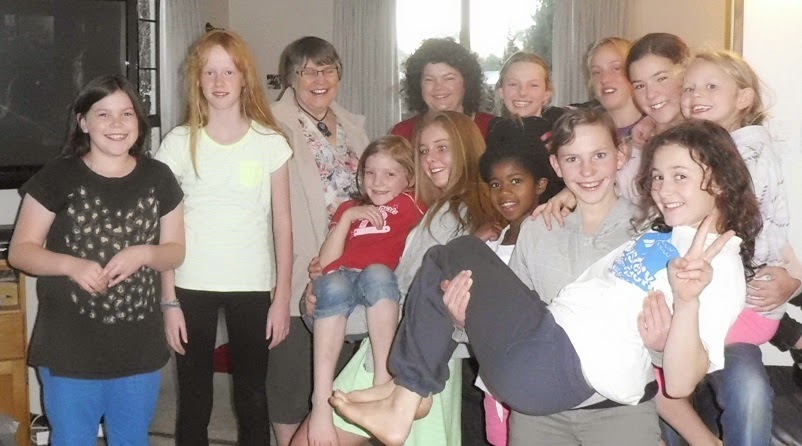 We were out this morning to fetch Rachel and Ruth who attended a sleep over the night before. They had so much fun with a huge group of girls.

One of the fun things they did - a combined braid. 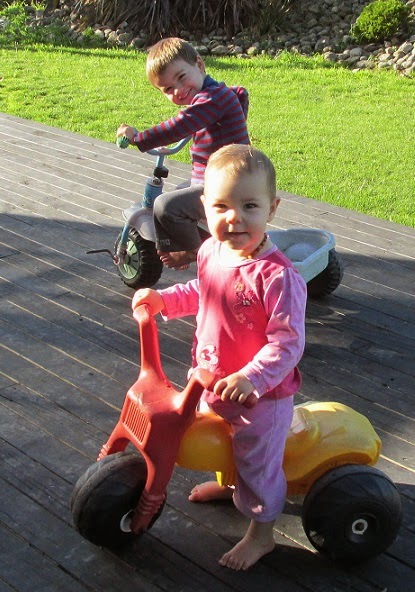 I have spent a lot of time out on the deck lately. Asher and Hezekiah will spend ages out here on the bikes. 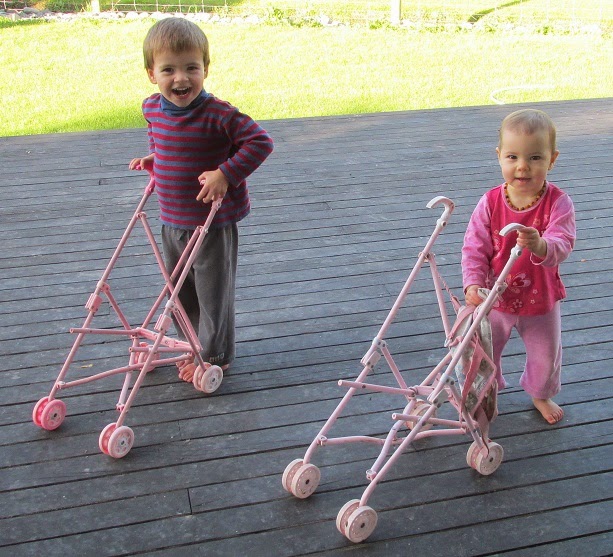 And pushing prams around (well - what's left of the prams). They have wheels and make a noise when you push them. That's good enough for these two. :-) 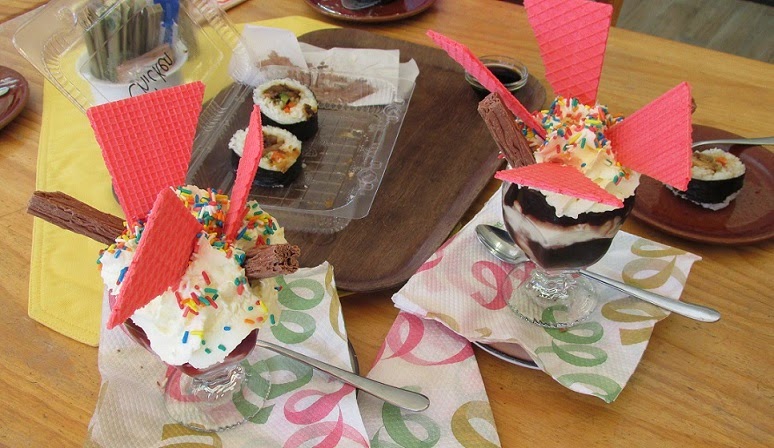 Saturday 3rd May. I had tried to think about something Brendon and I could do for our 17th anniversary today but was honestly just not comfortable leaving Asher. It has been 2 weeks since her last seizures and she did had 3 solid months of having seizures every 2 weeks. I don't want to be parranoid but also have to be realistic about what we have gone through and what I am comfortable with. Brendon understood. 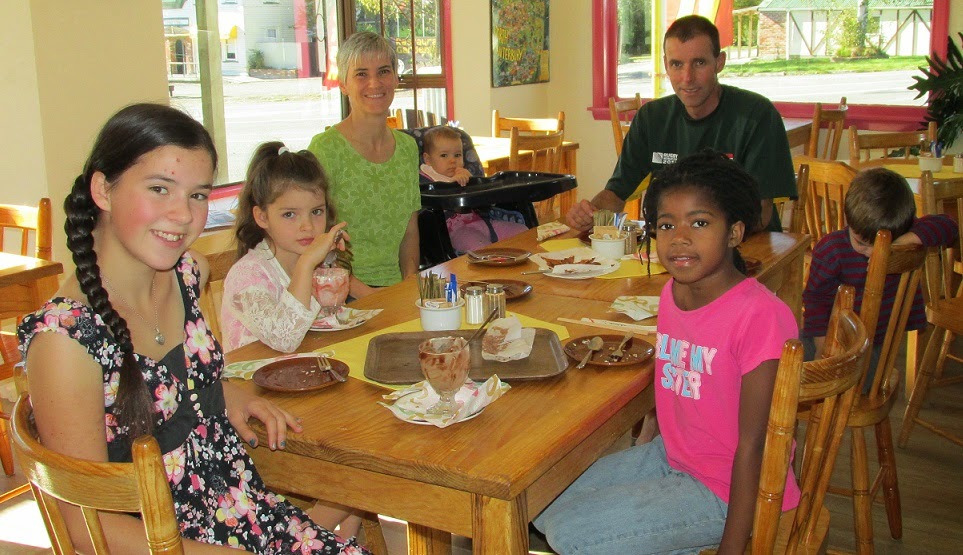 As one of us would normally take one of the children to the tea rooms over the weekend - I suggested we all go. So we got to celebrate together - as a family. I'm sure it will be remembered. The day we had muffins and ice-cream Sunday's (and a bit of sushi) for lunch. :-) We ordered a few things to share and so she put a few extra biscuits and flakes on the Sundays for us. :-) 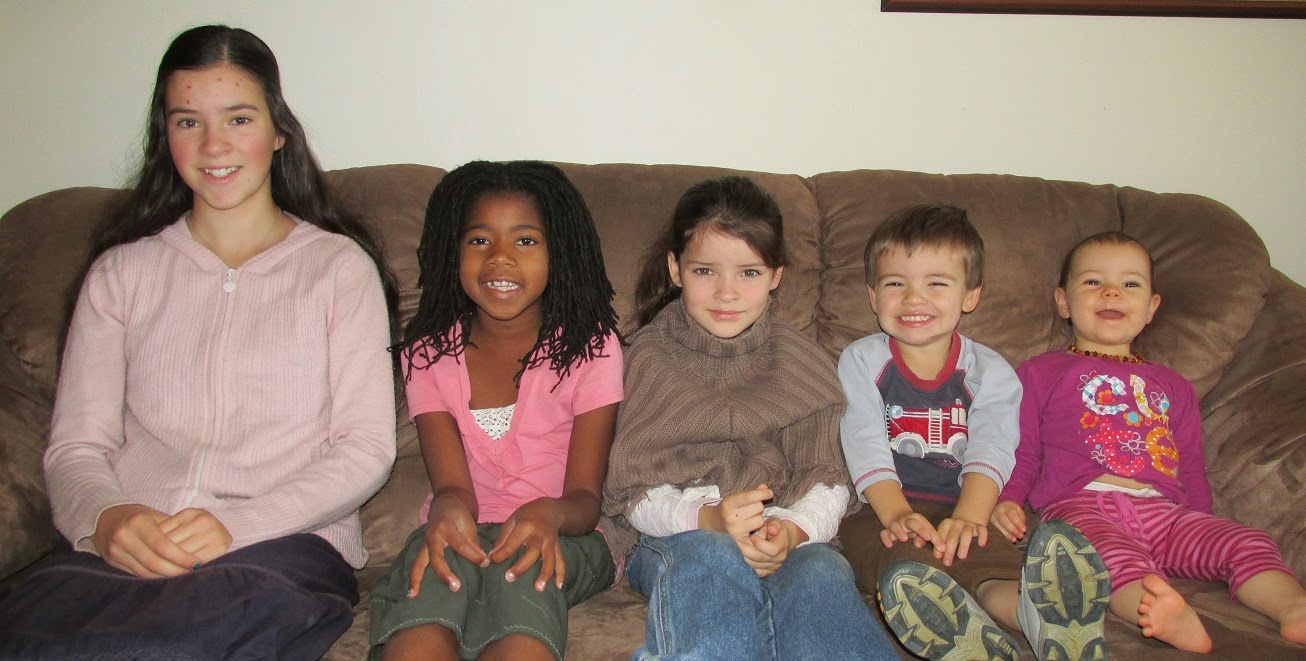 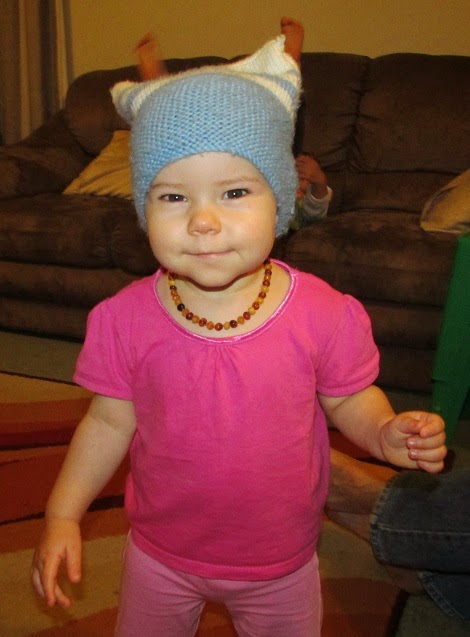 Above - Sunday 4th May. Finally got to take the children's monthly photo. :-) I must make a note about Hezekiah's shoes. I have finally gotten out of the habit of calling them "takkies" but have to smile as Hezekiah does not quite get "sneakers" right and calls them "sneakies." It's so cute and makes me smile every time. He just loves having his sneakies on and even keeps them on for afternoon naps some days. He made sure he had kept these sneakies clean so he could wear them to church today.
I didn't take many photos through the next few days but did get a few of Asher. Here she is enjoying wearing Hezekiah's beanie. He loves this beanie but had left it lying around - so she tried it on. I was pleased with his willingness in allowing her to wear it. There he is in the background - feet in the air as they often are. 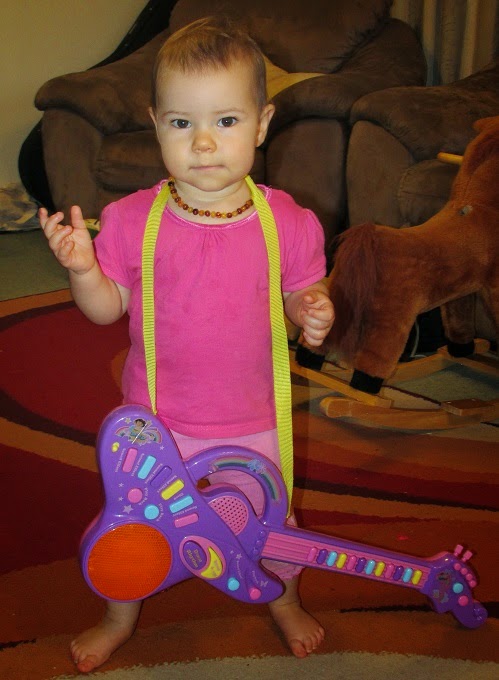 Asher loves the Wiggles now too and will often want to get the guitar and put the strap over her head. It is so much fun watching her dance to the music and every week we see her copying more and more of the actions. It's so sweet. 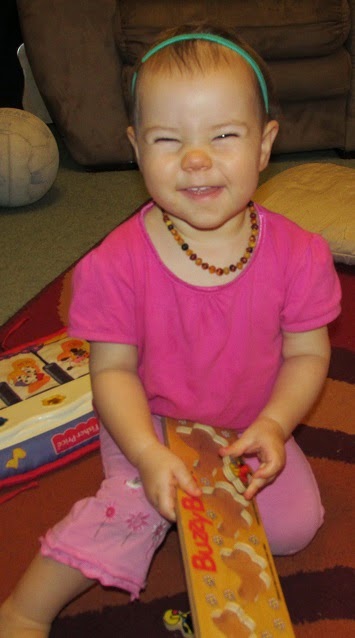 Pulling one of her funny faces. Ruth had decided to put an elastic alice band on her head. Brendon and I have never liked putting things on a baby's head - but it did look cute. 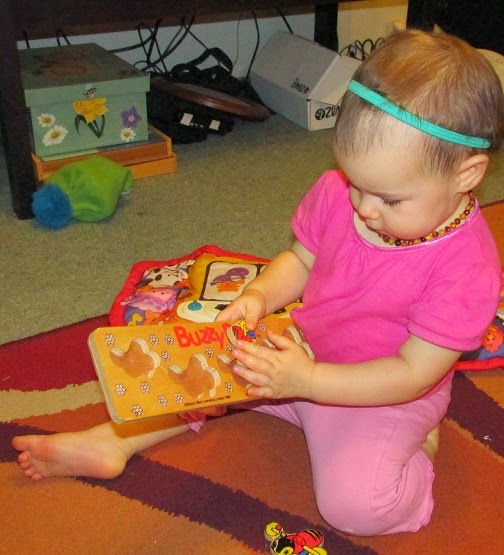 She does love these wooden puzzles. She has a few favourites and loves trying to put them back into their places. 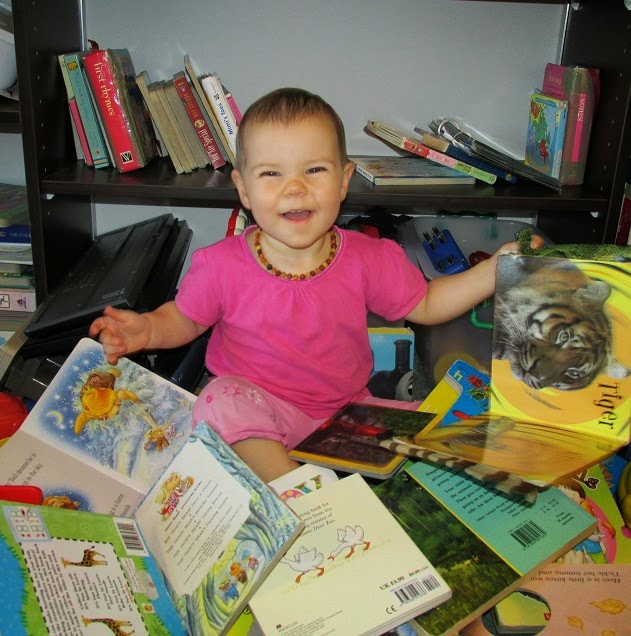 Enjoying the books on her shelf too. A whole lot of them. Thankfully she is very good at helping pack up. The books are a bit tricky to put away - but she helps with all the other toys. 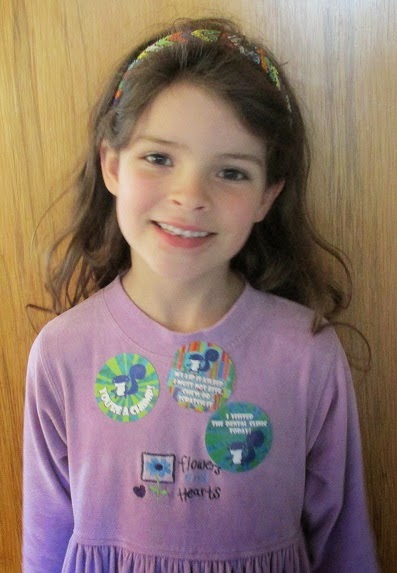 Friday 9th May. Hannah's teeth have been a bit of a long story. There were two molars that needed to be fixed and she had been booked in to have them done under anaesthetic because of how stressed she got when she had the last lot done. I have not been so keen on general anaesthetic for it and so we decided to see how she went with the dental nurse. It had been 10 months since she last tried and since then Hannah has gotten her first big tooth and just grown up a lot. She was actually really excited about going. The dental nurse told Hannah she just wanted to quickly fix those two teeth (as the whole had gotten bigger over the months and was now visible without the x-ray). So Hannah bravely got them done. She did cry a bit right as she finished drilling but calmed down quickly and they got the job done. I was so proud of her and SO pleased the general anaesthetic could be cancelled. We have made some big changes over the last 10 months to help with looking after her teeth and so we are hopeful she won't need to ever have such a big job done again. 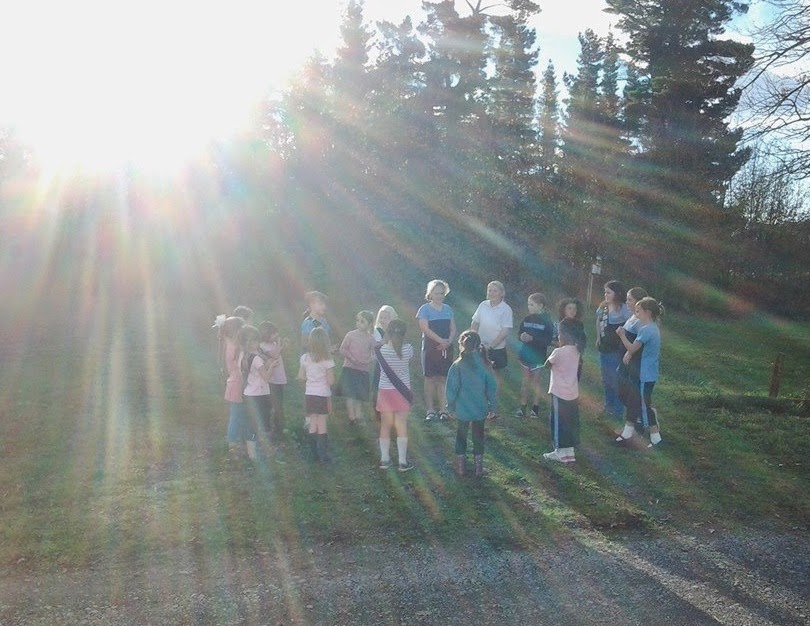 Monday 12 May. The Brownies and Pippins met together today as there were Pippins who were linking to Brownies and two Brownies ready to give their promise (Ruth being one of them). Noortje was a wonderful help and took Ruth and Hannah through for me (as it was just not practical for me to go with all the children). Hannah was pleased to be able to visit and I am glad Ruth got to say her promise on a special day with everyone else. Thanks Noortje for the photos from the day. 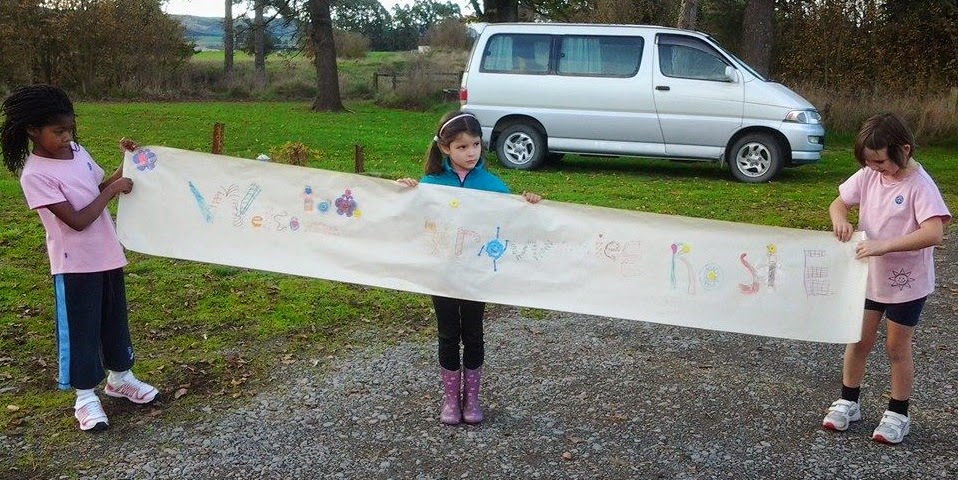 Wednesday 14th saw a new Countdown open in Amberley - just 30 minutes from us. This is a HUGE thing for us country folk as the closest big grocery store is an hour away. It was an extra treat to see this little section in their flyer about Patoa Farm Pork (where Brendon works).
It's going to be such a change for me to be able to do grocery shopping every week. The girls have ballet in Amberley - so I will be able to pop in every week with no extra travelling. What a wonderful treat. 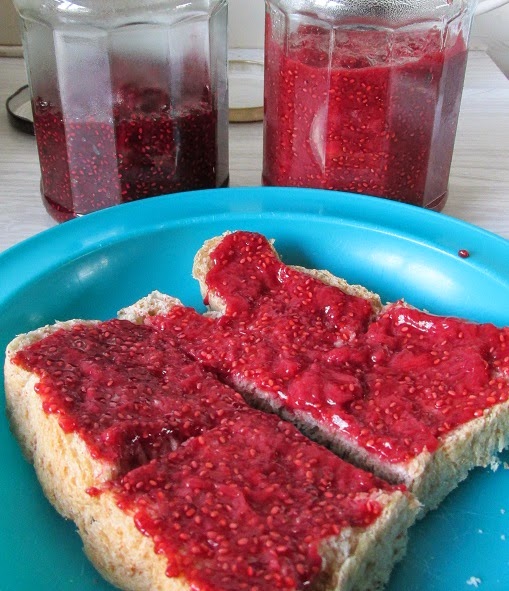 Today we made our first batch of healthy jam. You can find the recipe here. The one is strawberry and the other is blackberry with a bit of strawberry (as we only had 2 cups of blackberries in that packet of frozen berries).
For the first time the girls can put a nice thick layer of jam on their bread (this was actually the thick layer I put on for them to try it out). It's not only missing the negative of normal sugar but has the wonderful health benefits of chai seeds. I decided to just stop buying jam and so that has finally gotten us to make our own. We don't use sugar in the house any more (one of those changes for everyone's health and teeth) but it has still snuck in with some products like jam and chocolate spread. I have not bought another chocolate spread either but ordered Hazelnuts - so we plan to try that ourselves within the next couple of weeks. 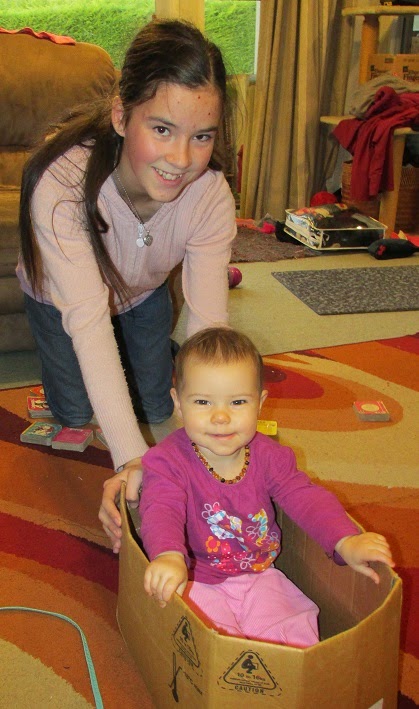 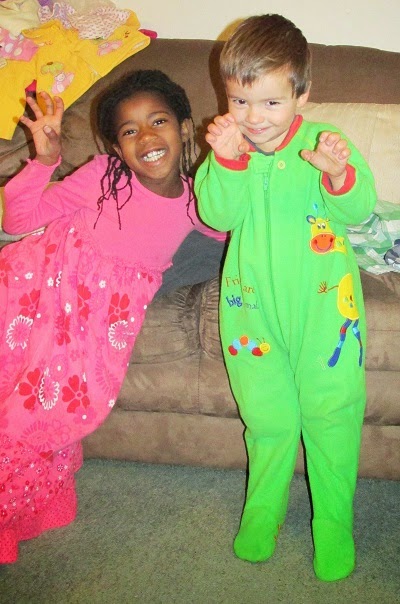 I have been sorting through clothes over the last few weeks and today I got to sort through all of Hezekiah's stuff. He only just fits this onesie he was given. He had fun jumping around in it when he tried it on but I don't know if he will sleep with it. Perhaps if it gets really cold he might give it a try. I think the only reason he even tried it on was because we told him Logan has a onesie. :-)
Right: Nothing like having your big sister give you a ride in a box. :-) 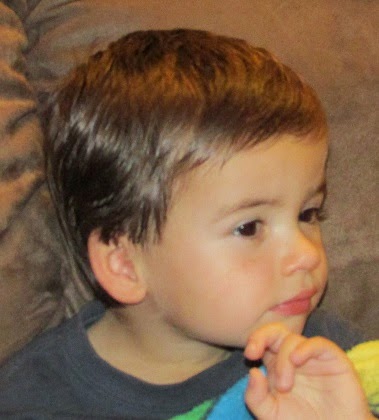 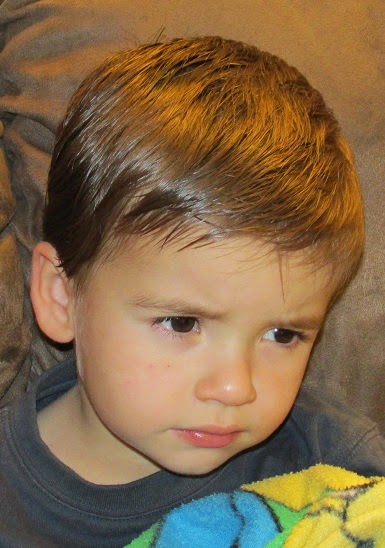 Hezekiah's hair is getting so long that Brendon brushed it for him after his bath this evening. He was not very impressed with having his hair brushed. And you can't blame him as he hasn't ever had it brushed. :-)
One handsome little boy. 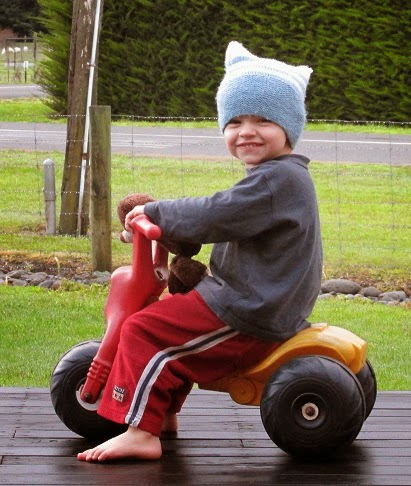 Thursday 15th. Another wet day but it didn't stop Hezekiah from heading out to have some time on his bike. With his beanie on he's fine. He was giving his little teddy a ride. This was a 2nd hand one that has been an "outside" toy for ages but has all of a sudden become a favourite for him. 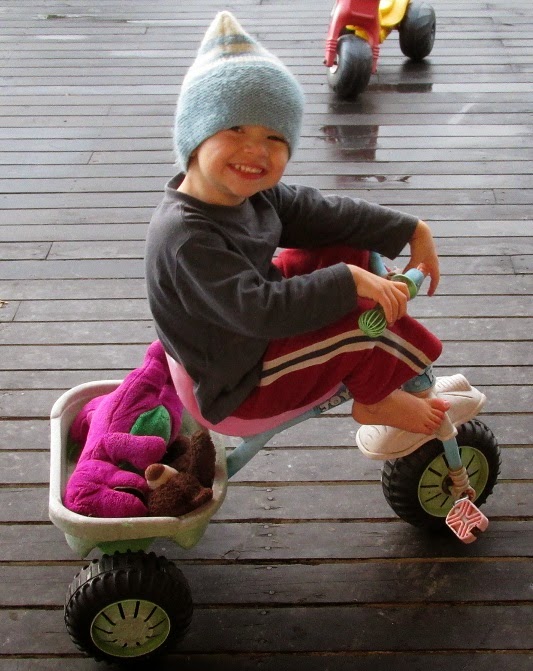 Barnie is still special though and he asked if he could take Barnie out for a ride (Barnie is an "inside" toy so is normally not allowed out). So he gave his teddies a ride. 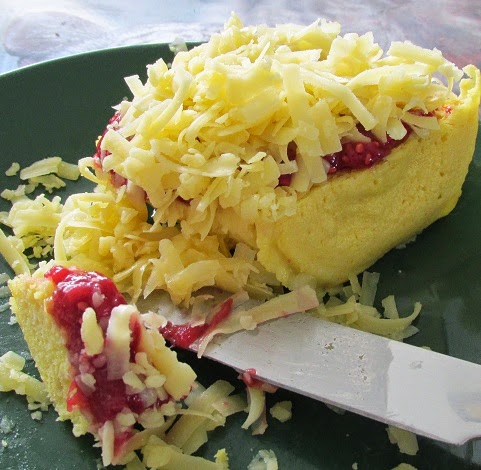 I decided to enjoy some of that jam today on a carb free scone (egg and almond flour the main ingredients) with cheese. It was delicious.
Posted by Buckland at 10:00 PM