Wed 26 March. These two just loving playing with me on the floor. 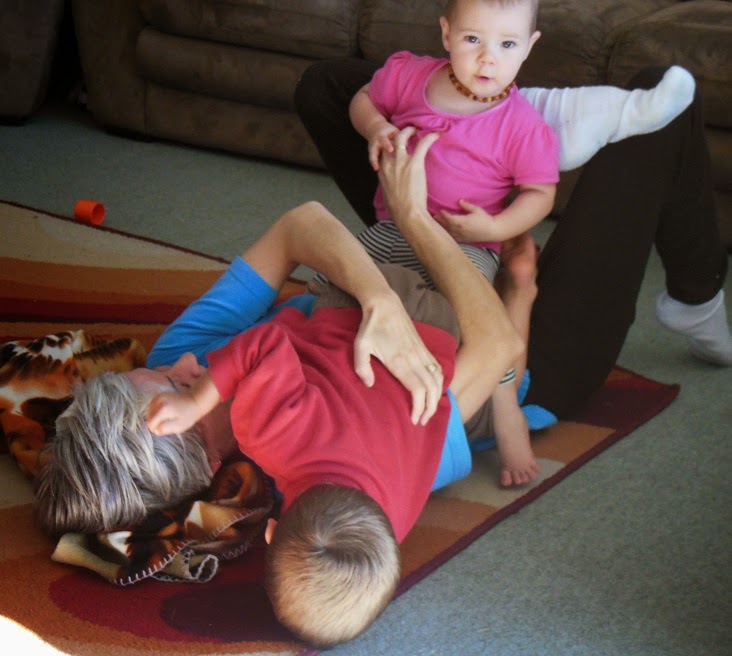 They are both on top of me within seconds of me getting down. Asher gets really jealous of Hezekiah and would even try push him away. She is learning to share me with him though. 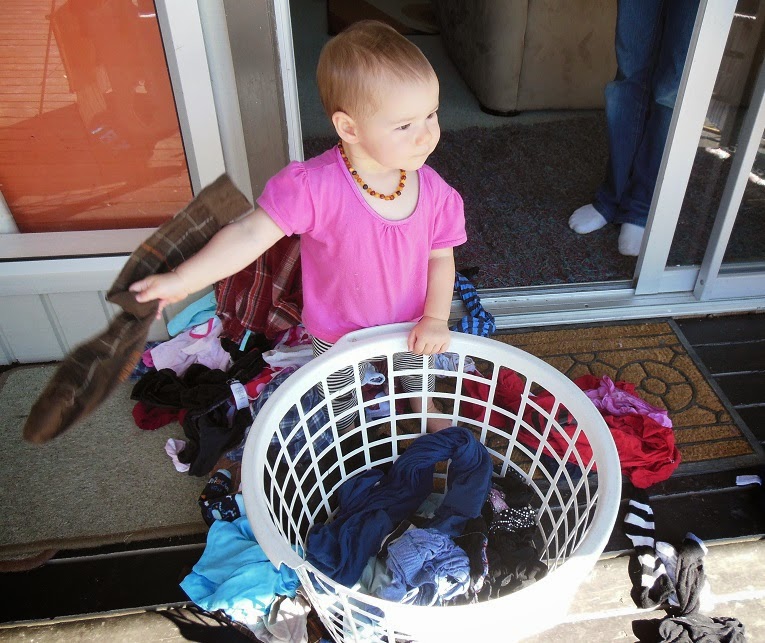 Helping Mum hang up the washing.
Hezekiah got quite upset about her unpacking it and kept telling her to pass it to us. It was rather sweet. Hezekiah will often come and try help me. It takes so much longer when he is "helping" but I really appreciate his willingness to help. So even though Asher is not actually helping yet - we will let her join in and feel a part of it all.
It's been a bit of a strange week for me. Over the last couple of months Asher's seizures have been 13 days apart. So I could tell I was far more aware and watching her yesterday (which was day 13). Ever day without seizures now has made me so thankful. It's been a very taxing 3 months. 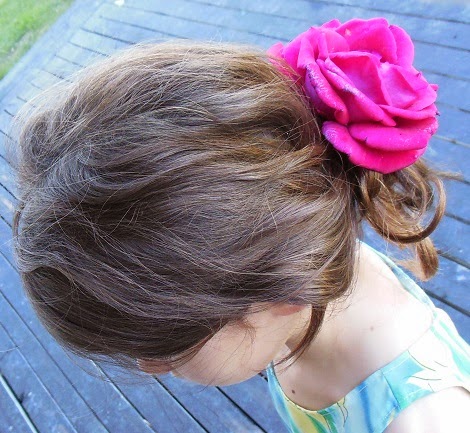 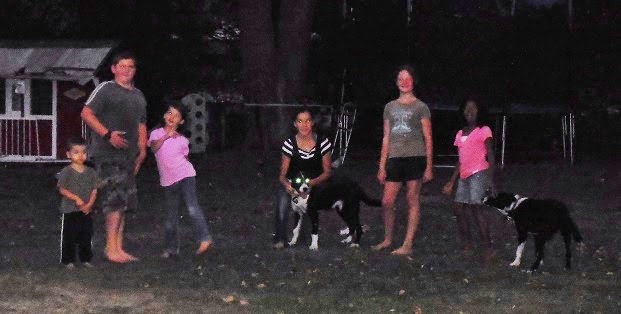 We ended up not having bible study in the evening but just a nice visit. The children loved the time outside playing. Unfortunately my camera just not able to take decent photos any more. 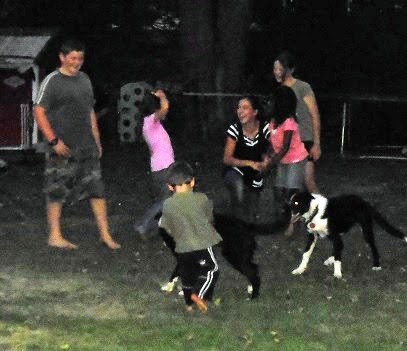 At least I could capture some of their fun (and pump some light into the photo afterwards so you can see something). 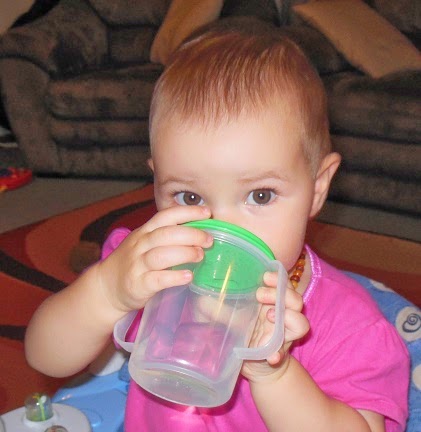 Friday 28th March. Asher found Hezekiah's cup today and thought it was grand to drink out of it. Once she had had enough to drink it became a toy though - and a bit of a messy toy at that. So I think we will stick to her drinking from a proper cup - at the table.

Saturday 29th March: Logan enjoyed riding around the garden with the girls this afternoon. They had different tracks all over the place and had a great time. Zorro was just a pain as he kept chasing Logan and getting a bit in the way as he tried to join in.

Sunday 30th March: 7:50am. Daylight savings is changing soon and this is the reason. To have this amazing sunrise at almost 8am just doesn't feel right. So next week this would be almost 7am. I really enjoyed seeing Hezekiah's enjoyment of the sky though. He was captivated. 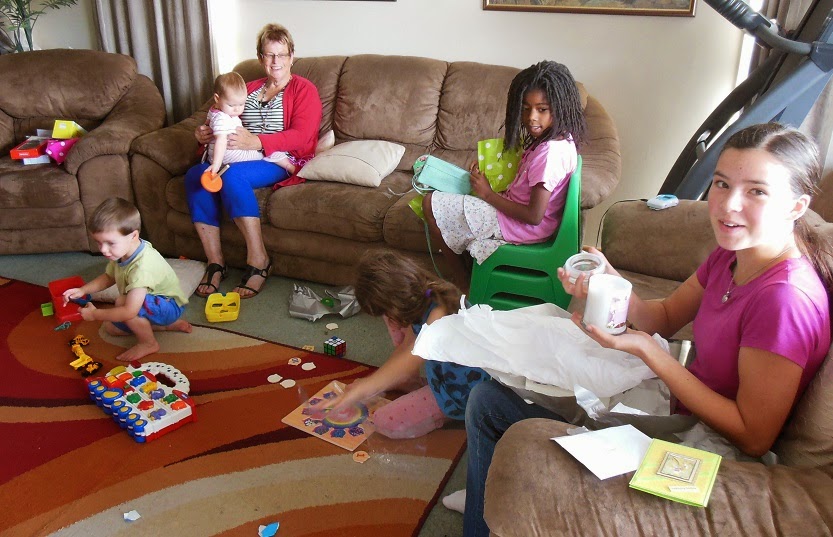 Tuesday 1st April. Lynn organized to come over today to give birthday presents. It's a busy time of year with Asher in Feb, Hannah in March and now Rachel in April. But she didn't want to have Ruth and Hezekiah feeling left out - so they got their birthday presents really early. :-) It was like Christmas. So much fun. 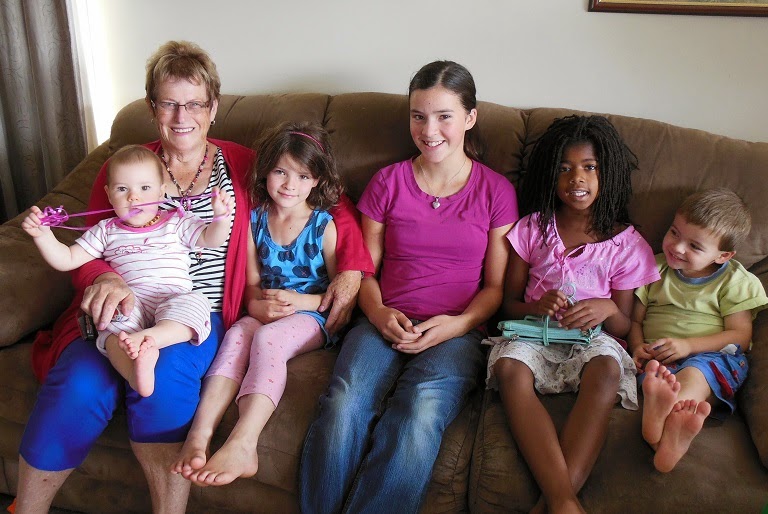 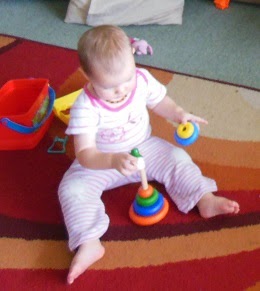 Asher getting into the stacking toy really quickly (although Hezekiah has loved playing with it too). 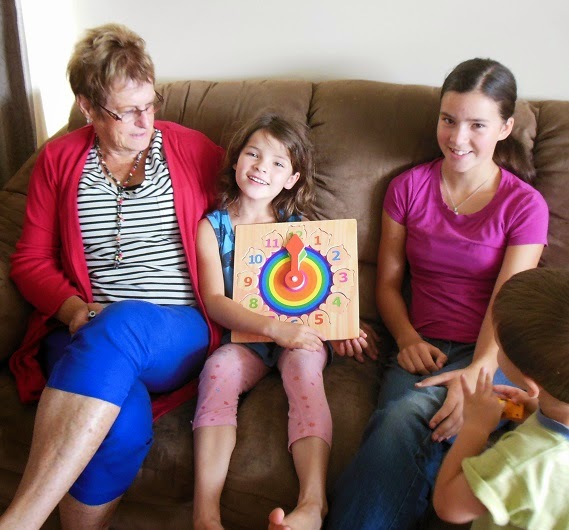 And Hannah was thrilled with her clock and started showing Lynn some of the "telling time" that she has learnt.
Thanks so much for your love Lynn. Such special memories. I am glad I got the nice photo above with all the children. 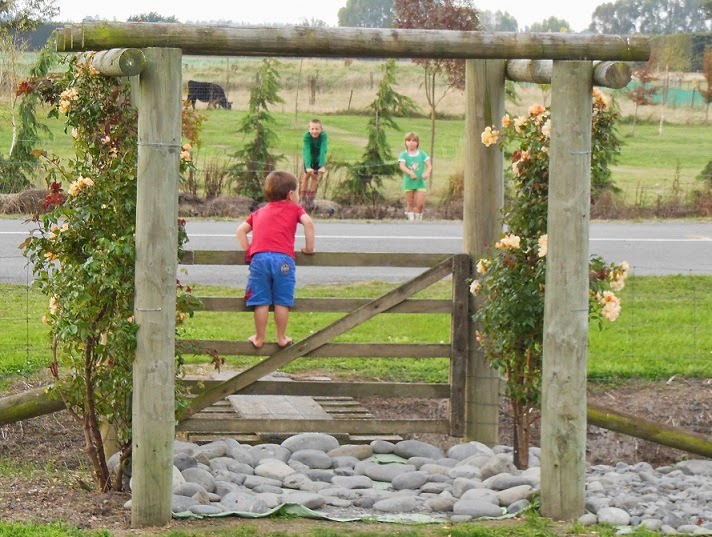 I had to smile this evening when I saw Hezekiah head over to the gate to have a chat with Logan over the road. Logan was telling him that he will be away at camp and only back on Friday.
And if you were wondering - he is able to open the gate and is having to learn that he is NOT allowed to go out on his own. 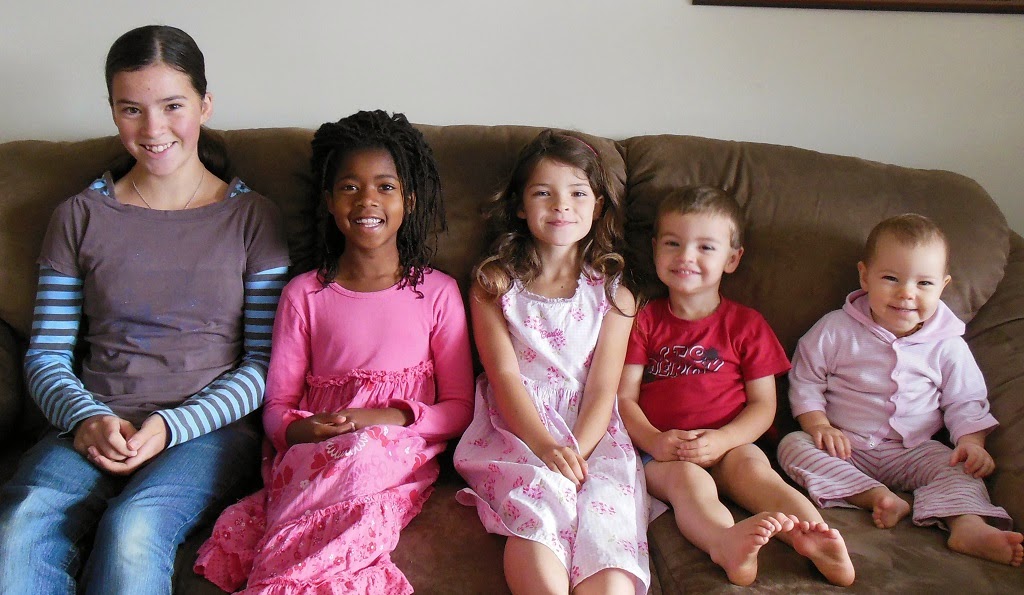 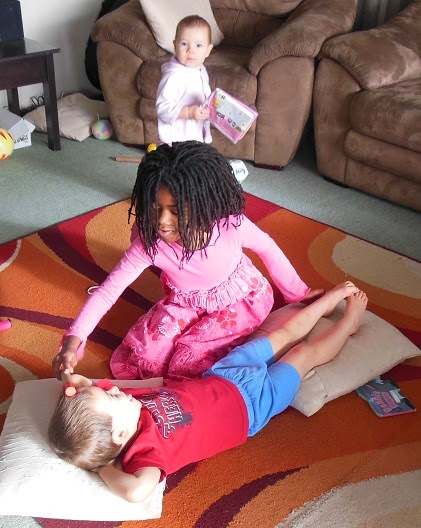 Wednesday 2nd April. I remembered to get the children's photo today.
And I just loved watching Ruth and Hezekiah playing this morning. She came up with such a funny game were they took turns being the sausage. They got seasoned, cooked and cut up. It was so funny - especially when Hezekiah wanted to pick Ruth up to put her in the oven (on the chair). I smile just thinking back on it. 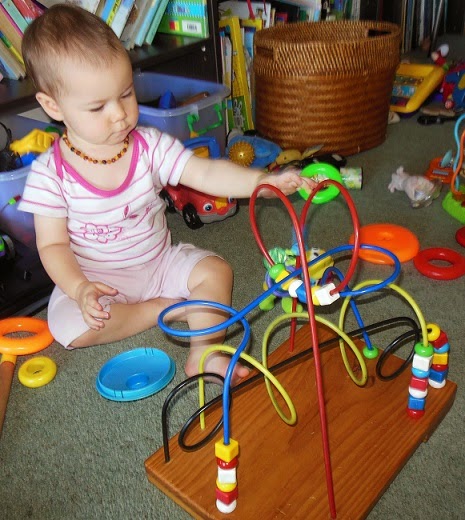 This evening at 6pm Asher had officially gone 3 weeks without a seizure. Although it was very much on my mind this last week, I had not spoken much about it. When we finally got to 3 weeks I let others know so that they could rejoice with us. This is the first time since the beginning of the year that she has gone more than 2 weeks between seizures and so we are very thankful.

At this stage we don't know if it is the increase in her AED or the fact that she also got onto high doses of glyconutrients 3 weeks ago (which were given as a gift for her after her last seizures). Time will tell. For now we just praise and thank the Lord that her poor little body has had a break from the seizures and we pray that this improvement will continue. 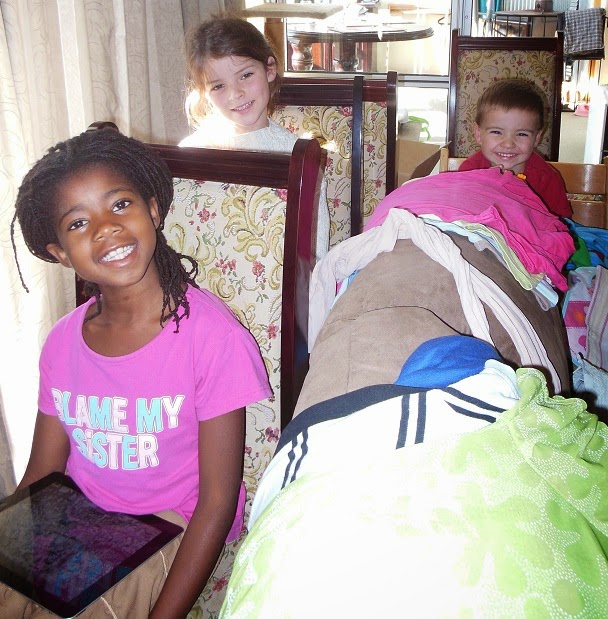 Thursday 3rd April. Asher just loves these alphabet sticks and the Moving to Music DVD. She has also started dancing where she rocks her head and bounces. Sometimes even going up on her toes. So sweet. Just hard to get a video of as she stops as soon as she sees the camera.
I moved all the chairs out of the dinning room to make it easier for Ruth to vacuum. These 3 decided they made a lovely aeroplane. Ruth was the pilot with her Google Earth app on the iPad. 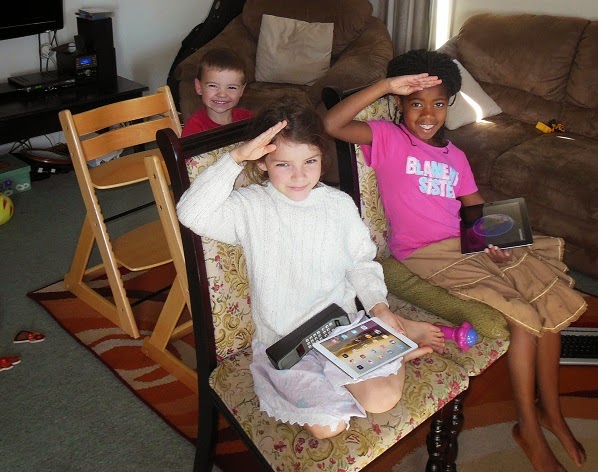 I decided their aircraft needed a bit of a make over and so I set it up properly for them. They were thrilled with the pilot and co-pilot seats and thankfully Hezekiah was happy to just be a passenger (with 2 seats to choose from).
Friday afternoon saw the children having friends over again. So much fun.
Saturday was a fun day with friends too. Rachel made a strawberry cheesecake for her party on Sunday as well as baking the cake (which she will ice in the morning).
Brendon had a long morning of work but a nice restful afternoon after we got a bit done on the berry patch while the little ones napped. Rachel and I then enjoyed afternoon tea out together. I am glad it worked out to be her weekend out on her birthday weekend. We had a lovely time chatting.
Daylight savings ended on Saturday evening, so we had extra afternoon tea things for the children and managed to shift dinner and then bed time later (although Asher only managed 30 minutes and not the full hour of staying up). I didn't want Hezekiah waking up at 5:30 on Sunday morning.
Posted by Buckland at 10:00 PM