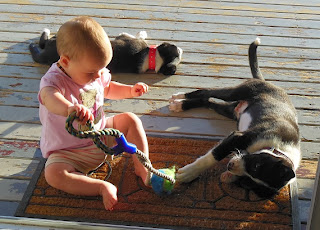 Asher was up early this morning and ready to go and play with the puppies.

Rachel and Ruth helped me make sushi to take with for the Youth Year End Party's shared lunch. I am rather impressed with our first efforts. The girls learnt really quickly too.

It was very hot at home but when we arrived at the Spencer's it was raining. Thankfully that did not last long and after lunch the sun was shining and the kids got to do the slip and slide they were looking forward to.

Hannah got on quite quickly actually, even though looking a little nervous. 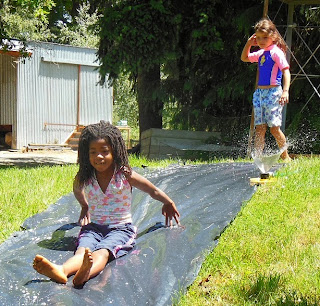 Ruth had loads of fun. 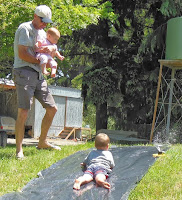 Hezekiah had a try but fell onto his bottom as he ran on and so was a bit nervous about going on again. Perhaps next year he will be just that little bit bigger and enjoy it as much as Ruth does.

Above: I love that Kerry says the water balloon fight is HER favourite part of the day each year.
I think it's a highlight for all the children too. 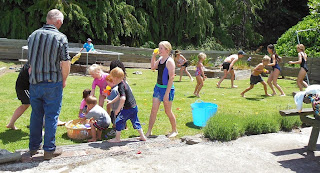 The children were all pleased to see a second container of balloons come out once the first one was empty. Hezekiah's goal was to just get them to break (as they need to land quite hard to pop). He just threw them at the ground. It will be interesting to see when he realizes people are actually throwing the balloons at each other. :-)
We headed down to the pools to cool off later and again had the pool all to ourselves.