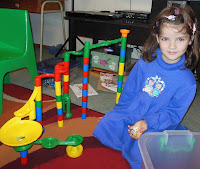 Monday 3rd: It's getting to be a bit of a tradition now that Hezekiah asks for a marble run to play with every morning and today Hannah asked that I take a photo of her with the one she made. 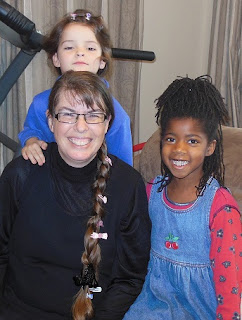 Even though it was a public holiday today there was still a full load of work at the farm for Brendon. He did managed to get off a bit earlier than normal which was nice. At least it felt a bit like a holiday for us though as we had Michelle pop over for a visit. She stays in Auckland but got free tickets and used them to fly down to Christchurch and have a week here. 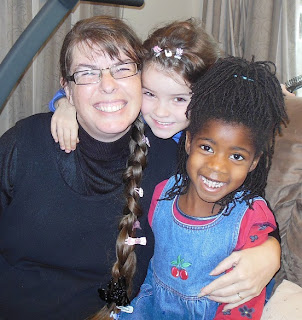 It was wonderful to see how much Hannah especially enjoyed her visit as she was touching her almost the whole time she was here (either sitting on her lap or playing with her hair). So even though it was a short visit - it was a great time to build those friendships a bit more. We had fun playing a few games together while the younger two slept which was also really nice memory making.
And a lovely video of Asher laughing at Ruth.

Tuesday 4th: Rachel was very creative today with the marble run construction and kept all the different colours separate to form 4 different structures.
Hezekiah's eczema broke out on his legs yesterday evening and today I saw the new molar that has been causing the trouble.
I wanted to give his legs time to get some air and so he ended up wearing some panties of Hannah's. We will have to make a plan really quickly to get some underpants for him. Brendon was NOT impressed to see what he was wearing when he got home. :-) 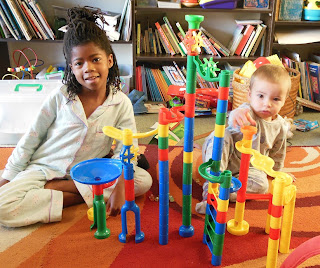 And once Hezekiah had the pants on he was not at all interested in putting a nappy back on. So although he has been using the potty a lot lately and getting much better - I was not planning on putting him in pants until summer. So much for my plans.....
He did allow me to put a nappy on him when he went to a friend when we headed off for ballet. He cried again as soon he knew he was having to get out of the car but apparently it went so much better today and he stopped crying as soon as they were in the house. He does love the friend so much - so it was nice to hear how much more relaxed he was today - staring to walk around the house to investigate things - so definitely feeling more "at home." 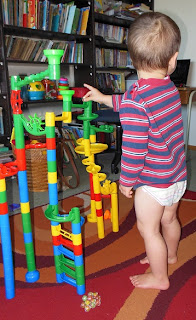 We always leave the booster seat with him so that he can drive home with Dad. I think he is finally realizing that Dad will pick him up in the "truck" later - so it's not such a bad thing to have to say goodbye to Mum.
Wednesday 5th: Brendon had made the smaller yellow and red run last night for Hezekiah and Ruth attached it to her bigger run this morning (after the requested above photo was taken).
Brendon had a course to attend today in Rangiora for the farm - so he was able to buy some underpants for Hezekiah. He was thrilled with them and now even wants to dress himself. And so just like that he is growing up and does not seem like a little baby any more. (And thankfully it was only 2 days of wearing Hannah's panties. His legs are already fine.) 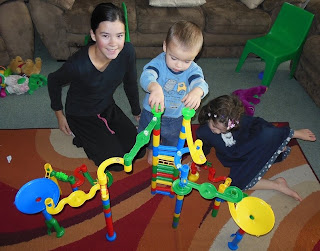 Thursday 6th: My idea today was to make two runs that mirrored each other. I started at the base and worked my way up. The only pieces that were not the same were the first two (as we only have 1 each of these). I love how Rachel is especially interested in having a look at my designs. They had loads of races on these two today. 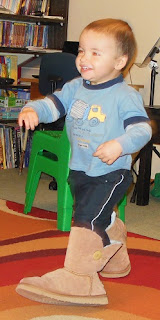 Holly joined us for dinner again this week (as she did last week). We had roast pork again (an easy choice for me that I know will be gluten free). I started a bit of a tradition in having candles at the meal and the children all love that. Before Bible study started Hezekiah had us all laughing so much as he "walked" around (and fell) in Holly's shoes. 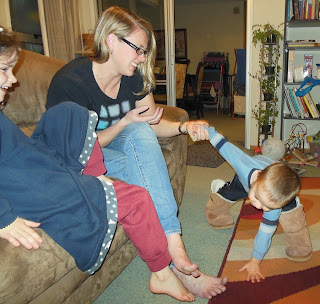 It's lovely to see him building the relationship with her. He has tended to be a bit shy of people in the past and it's lovely to see him getting more comfortable with people. She got a bit of a work out with him in her arms - lifting him up and dancing around with him.
Steve stayed longer after Bible study and we had a great chat with him. The Lord has been teaching me so much and so I decided to share that all in a post on it's own (see Friday's post). 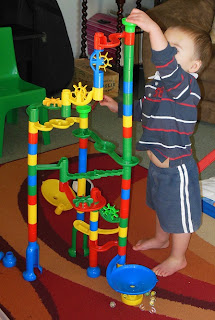 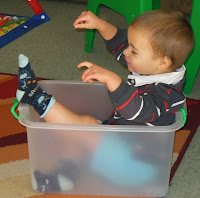 Hezekiah tipped the last of the marble run pieces out the toy box, climbed in and started singing "row, row, row you boat". He is learning so many songs lately and this is one of his favourite. The verse he likes is "if you see a crocodile, don't forget to scream". He does not sing all of that - but always ends with the scream. I have to add here that every time I hear that song I think of the verse that Gillian (my sister) sang. "Kick the teacher over board and listen to her scream." I especially find it funny because Gillian is a teacher. 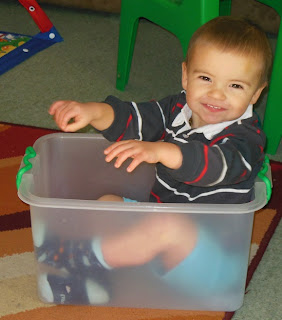 And although we don't ever plan to let him play rugby (football / soccer is our family preference) he does look supa cool in his rugby shirt. Such a sweet boy. 20 months old now. I can't believe he will be 2 so soon. 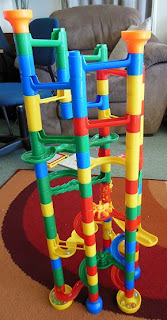 Saturday 8th: I wanted to create a marble run that had in fact two separate runs that were intertwined (and supporting each other). The girls LOVED the idea and had fun seeing which run was the fastest. It was also a nice sturdy structure and so lasted through the day. Although I did not get a photo - I realized that Brendon normally does not get to see the runs as they have normally been packed away before he gets home. It was fun to watch him playing with Hezekiah with it today. 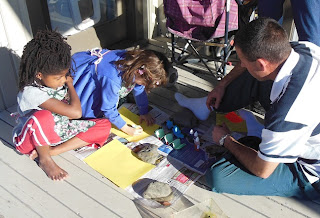 I finally got Hannah's correspondence school posting sent back this week (a good 3 weeks late). The one thing we had NOT gotten to was the craft (with dye). Although there was a change of plans and Brendon had to work for a bit this morning - he was still able to do this with the girls after lunch while the younger two slept and I still got that time to get things done myself. Hannah did this picture with crayon and then dye. Thankfully I got a picture of it as she very quickly gave it to Noortje who stopped in for some help on her tablet in the afternoon. 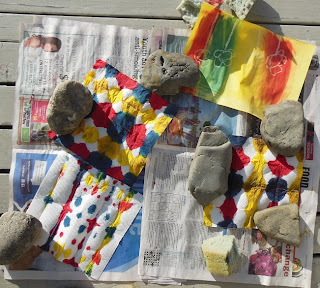 Some of the items drying off. Hannah made up a game with other pages they had done. She would throw them up in the air and then jump off the deck to chase them. Art can be used in so many ways. :-) 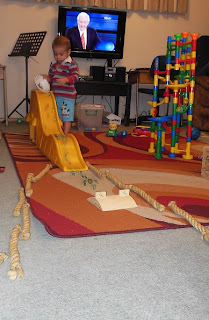 Sunday 9th: Rachel was able to go to the Pony Club today. I am always so thankful for all the effort Christine puts in to take her and Auto. The only negative is not being able to watch her myself or get photos. Apparently she had an excellent time. She learnt so much and Christine had many good things to say about the morning. I thing one of the biggest things was Rachel building up her confidence when "away from home". So I was very pleased she had the opportunity.
Our "church" at the moment is watching David Jeremiah on TV. We record the message from the previous week (as it's shown in the evening) and then watch it normally on Sunday morning. Today we watched it in the afternoon once Rachel was back. 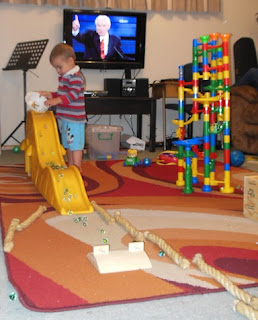 Hezekiah was told to not use the marble run while we watched as it was rather noisy. A new creation of mine with 3 different runs but with all of them joining at one point and ending together.
He does love playing with the marbles though - so I set up this little course for him to play with. At least it was a much quieter game.
Posted by Buckland at 10:00 PM