Early on Monday morning I had a few hours of strong contractions that by 4am when Brendon gets up for work he sent messages to let people know he would not be coming in. We really thought things would finally get started. Just before 6am I had a show and was feeling positive that we were finally moving towards getting into labour. Brendon even put some water in the pool (which got emptied out a couple of days later). Things quietened down once the house was busy with everyone up (as I expected). Sandy came around at 10 and it was great to know baby was nice and low. I was already 2 cm dilated - so that was encouraging. Sandy had picked up some homoeopathic medication for us on Sunday and so I could get started on that. By lunch time things had picked up nicely and the contractions really took all my focus. Ruth was really sensitive to when they were happening as she would just stop talking and wait for it to be over. Dear little Hannah was oblivious and could not understand why at times I did not answer her questions. It was great having Brendon there to help with the children and to help me focus on keeping my shoulders relaxed. Things quietened down in the afternoon - perhaps because of the heat. At 7pm we all went for a walk as it was finally a bit cooler. It was nice to get out in the fresh air. The walk did not however help get anything going. 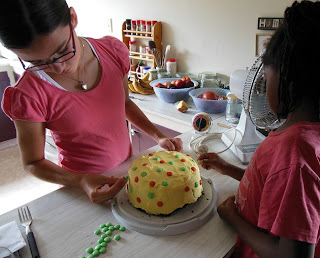 For most of Monday night I had contractions every hour. At 3am they started coming every 20 minutes and then at 4am it was down to every 15 minutes. I got up at 5 and they stopped. At least I was able to sleep between them and did not need to get out of bed to cope with them. So I was thankfully not too exhausted for the day ahead. Brendon was pretty tired though and so we both enjoyed a good morning nap when Hezekiah had his.
Rachel baked another cake today (Tuesday) as every day they are hoping that baby will finally decide to come.
Contractions picked up again in the afternoon but were very much on and off. It's been an emotional time - hoping that things would finally get going and then they don't. God has been so very faithful though and I am so thankful for His peace. 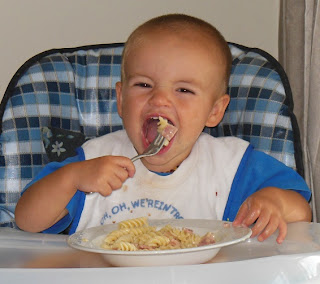 Hezekiah started feeding himself this week. Perhaps just out of habit we had just kept feeding him ourselves (also because he shovels meat in at far too fast a pace as he loves it so much) and he is doing really well.
Wednesday saw us off to town for a scan to check on baby. Only a day short of 42 weeks at this stage - so it was good to get confirmation again that the placenta and cord are working really well and that baby is growing well and not compromised at all with staying in for these extra weeks. A friend watched the children for us in the afternoon so that it could just be Brendon and I for the trip in. That in itself was a nice break. We got Chinese food for dinner which friends joined us for - and we had a lovely time together. Laughing and enjoying the children. So although a very busy day it was really good to get peace of mind about baby and enjoy lovely Christian fellowship.
Wednesday night was absolutely exhausting though. We had thought we would head off to bed but as the contractions had started to come quiet regularly I just wanted to stay up. At this stage it was about trying to do whatever would keep the contractions going in the hopes that we would finally get to established labour. Contractions came through the night every 10 minutes. At two different times we tried to get some sleep and they slowed to perhaps every 20 minutes. They were too uncomfortable for me to stay in bed though - so we were up again. Brendon probably only got around 2 hours of sleep so we were both completely exhausted on Thursday. I slept most of Thursday - only being up for about 2 hours through the day. I took a total break from all the medication and treatments and just rested. A friend was again a blessing to us and had all of the children over at her house in the afternoon so that Brendon could get some sleep too.
Thankfully by the evening he was feeling refreshed. I was feeling much better but still emotionally quite drained. For the first time in the week I was actually hoping nothing happened over night. The Lord was gracious and it was a very quiet night (which meant contractions every hour but I could sleep well between them). When I woke on Friday morning I felt totally refreshed. Physically and emotionally. God has shown Himself so faithful through this very hard week and I am so very thankful that I have Him to hold onto and to turn to when things are hard. It is such a blessing to be His child. 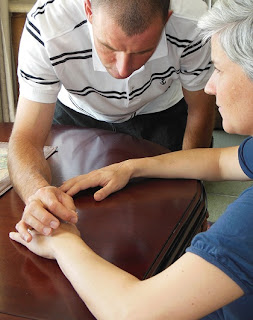 I was however a bit unsure when I got up on Friday morning about what I would use to try and "help" things again. It was great to spend some time in prayer - asking for the Lord to guide us. And He answered so quickly because Brendon felt quite sure about a "plan" for the day. The first part of that plan was to get one more dose of acupuncture. Sarah could only come past after play centre just before lunch time and could not stay long. So she put the needles in and gave Brendon a lesson on how to stimulate them. We went for a new labour inducing spot along with the other 2 (so 6 needles - right and left on each point). We did a real strong session today with Brendon stimulating them every 5 minutes.
We also had to book the induction at the hospital for Monday (now officially over 42 weeks). So after that I felt better about really giving everything a good go - one last time. I got started on the homoeopathic medication after lunch and Sandy came at 4 to do another stretch and sweep. I felt really relaxed about this plan. For one last day we will do all we can to help stimulate my body in as natural a way as possible to get labour going. My feeling was that if things did not happen overnight - then I would have Saturday and Sunday to rest before the induction on Monday. 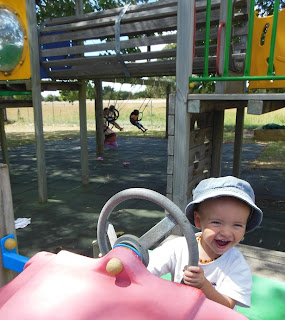 We walked down to the play centre after lunch. It was great to get out and give the children something different to do. We will have to try and find some driving toy for our garden as Hezekiah just loved the "tractor".
It was also good for me to be upright for a while after the acupuncture. The "new" labour point is the same one on the small toe that can be used to turn a breech baby - and I did not want to give this baby the slightest chance to flip around. At this late stage (even after 38 weeks) it is normally only used for stimulating labour (it's normally too late to use to turn a baby after 38 weeks) but I wanted to make sure as this baby does move a lot.
The visit with Sandy was really good. We chatted a lot about what to expect if we have to go into hospital on Monday for the induction. It was a real blessing to know that she would push for things to be as natural as possible. The first step would be for them to break waters and she would insist on giving me a couple of hours to see if that would be enough. If we can avoid the drip then I could still have a water birth (and this is what she would push for). It's wonderful to know I have this amazing support of someone who knows me so well. God has been so good in giving me a wonderful peace about it all and I praise and thank Him.
It was also an encouragement to know that baby was nice and low with cervix really soft and already over 3cm dilated. It was good to feel that if labour did finally get started tonight that my body was really ready and I just feel so much more mentally prepared. God has taught me so much through the last few weeks about trusting Him that I feel I am going into this labour far more prepared mentally than with any of the others. This whole week I have been listening to a number of scriptures to song that I had chosen and they have really helped me to keep my focus on God, His provision, His care, His sovereignty and His love. What an awesome God I serve.
Posted by Buckland at 5:30 PM