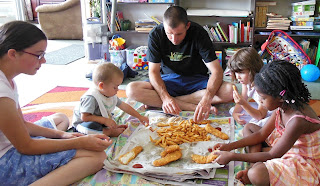 Saturday 12th: With Brendon working this morning it really only feels like the weekend starts when he gets home. Thankfully we still got started on our weekend plans in the afternoon. First thing was to see if we could move the dining room table into the lounge. When it came into the house it was dismantled - so it was nice to know it could get through. We were not in a major rush to get the table set up for dinner though - as fish and chips was on the menu - and the girls favourite way of eating it is on the floor. :-) We have not done it in a while because of Hezekiah - but he is now old enough to sit nicely and eat with us. It's so cute to see him want his own little spot of tomato sauce to dunk his chips into. He does love fish though and always ploughs though that really quickly. 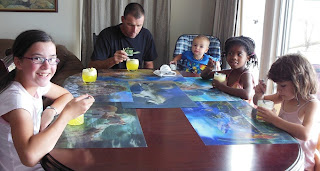 The dining room table did get set up though as we needed it for our "desert". Ruth had been wiggling a tooth for the last couple of days and so I bought a bottle of cold drink as a treat for when it came out. We don't do any tooth fairy stuff - but somehow this tradition as been started. As we hardly ever have fizzy drinks - it's a real treat. 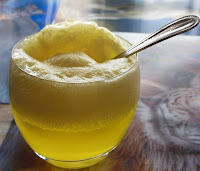 Ruth managed to pull it out after dinner - so I suggested cream soda floats for desert. I don't think Brendon and I will ever get used to having yellow "cream soda" (it's green in South Africa). Rachel and Ruth would love to know why it bubbles up the way it does when you add the ice cream. So if there is anyone who has the scientific answer for them - they would really appreciate it. 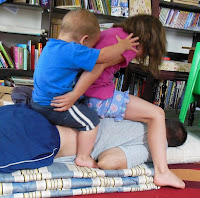 Sunday 13th: After watching our morning message Rachel and I headed out for morning tea. We decided to rather go in the morning than the afternoon as we had room plans for the afternoon. We had a nice time out and got back to roast chicken almost ready for lunch. After lunch Brendon felt a bit sleepy so he lay down on the mat we had brought in. This was all the invitation the younger ones needed for a fun game of play-on-Dad. It was so much fun watching these two. They had so much fun and are so rough with each other. Thankfully no one got hurt. 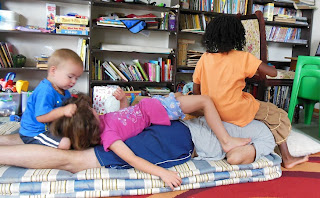 Ruth even joined in for a little bit and Rachel would have loved to join in to. She has had to realize that she has now just gotten physically too big to join in with games like this. At least we could enjoy it from the side line though. It was lots of fun.

And then it was time to start setting up the pool. We put a Bible story DVD on for the children and got started. As expected - Ruth was our little helper - wanting to know why we were doing all that we were doing. 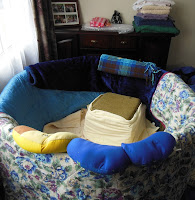 I did not take a picture of the frame - but this 2nd step was insulation and padding. The photo on the left shows the seat nicely - and the one above shows the thick cushions on the floor for kneeling on. Sheets around the bottom to help with insulation (something I don't think we did the previous 2 times). 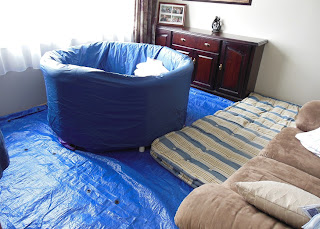 Ruth could not help but say "won't it all get wet?" We got her to help us with the next step though - putting the lining on. I think she figured it out on her own though before we really even got started. We borrowed this tarp from Sandy for the floor which will be nice with a few towels on it. We only had towels around the pool with the other two births - but this is a nice way of making sure the carpet won't get wet with Brendon or I getting in and out. 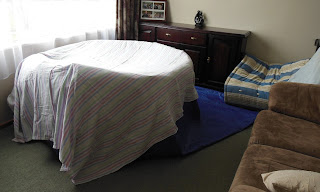 We put all the extra sheets, towels, and pool equipment into the pool, folded up the mat and extra bit of tarp and covered it all up. So our birthing room is all ready. Even though I might have another 3 or 4 weeks to wait for this baby to arrive - it does help me to know what at least this side of things is ready. So if baby does decide to come early - we won't be rushing around trying to get things set up.
With both Hannah and Hezekiah I ended up sitting feeding them for at least 3 hours after they were born - so it's nice to have the lounge chair in here too. As soon as baby is born I can get comfy and feed the little one. What happened with the previous two is that while I fed baby Brendon and the midwife emptied the pool. So at least I can have some company in those first few hours and they can get some things done too. 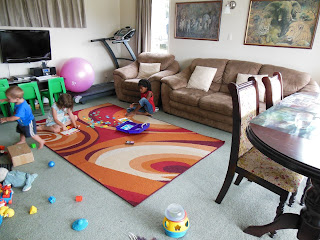 I took this photo on Monday just to show how much space we still have in the lounge. We though the children might be pushed for floor playing space - but with the lounge chair out and some other furniture moved around - there is still loads of space.

Even though it was quite overcast today it was still very hot. So we decided to head down to the pool earlier than we normally do. We would normally not go before 4 and today we were there just before 3. I made sure I got a photo of Rachel jumping in off the top step. It's great that she has overcome the fear / hatred she had of jumping in and getting her head under. It's helping her swimming a lot. 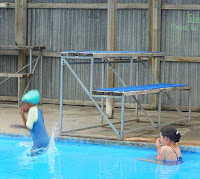 Ruth also jumped in from the top the other day - so this time Rachel was the one to be there to help her to the side. You can see Rachel is not wanting to get splashed and then Ruth turned as she jumped and ended up quite far from her. She popped to the surface quickly enough though and Rachel helped her to the side. 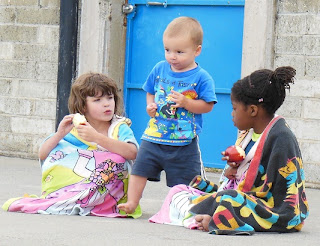 When we arrived there was no one else here. Slowly others arrived but I was glad to see I was not the only one who decided to give swimming a miss today. I did try - but it was hard enough just getting my legs wet - so I did not bother - just a little too chilly for me today.
Hezekiah had a nice swim though. He got out before the girls and sat eating an apple. Even though he must have had half an apple by the time they got out - he made his way over to them to see who he could get some more apple from. 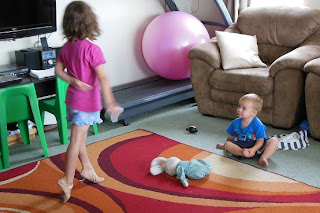 I had to smile this afternoon when I came into the room and Hannah was putting on a ballet performance for Hezekiah. He was happily sitting on the chair when I first came in but by the time I had the camera he was on the floor - a bit closer. 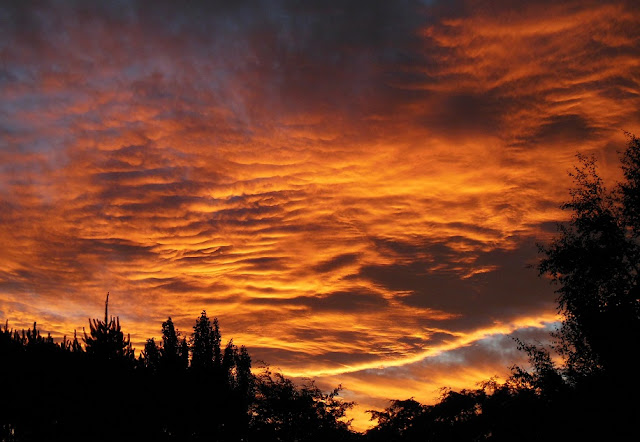 And what a beautiful end to the day. I noticed that lovely orange glow outside and then spotted this magnificent sky out the back door. 9:20pm. 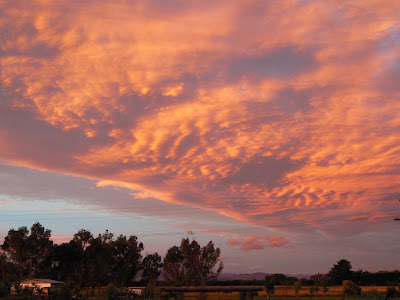 This was the view from the deck. Such lovely clouds.
Posted by Buckland at 10:00 PM