Last night I told Rachel she could head out to get started with her Saturday job as soon as she wanted. So she was up just after 5:30, had breakfast and headed out before 6. 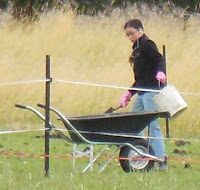 I took these photos at around 7:30 - but she kept going till around 9 on this first session. Christine has been leaving this area but has a new horse coming soon (it was meant to be tomorrow - Sunday but there was a delay) so she wants to get it sorted. She offered to pay Rachel to do it if she wanted - and she agreed. She does always take the iPod with so she can listen to Narnia while she works. :-) 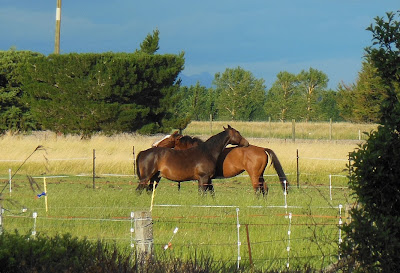 I got this nice photo yesterday of the two horses who have been in this area - Chicken and Porky. 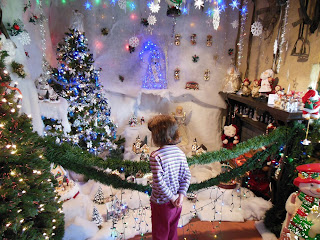 Last weekend was so busy that it was the first weekend we have not gotten to take one of the girls out for morning or afternoon tea. The previous week Brendon had taken Ruth to see the Christmas grotto and Rachel missed it last weekend (although we did go out with her to the Hobbit). So today I took Rachel and Hannah. It was a lovely display and we all enjoyed looking at all the different things.

When we got back we were amazed at how much Brendon had gotten done on the front ditch. It was getting really overgrown - here is a close up photo to give you a bit of an idea of how bad it is. 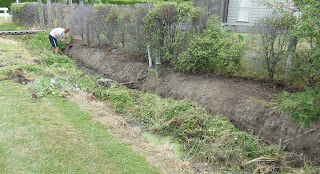 The council is supposed to keep this ditch clear - but Brendon had finally had enough. Hezekiah went down for his nap soon after we left and Brendon got loads done. He focused on clearing our side of the ditch - so at least it looks a lot neater. There is still so much in the ditch that needs to be cleared out - but a big truck to load it all into really is needed. Hopefully in the new year the council will get around to it.

Rachel worked loads more in the afternoon. Christine suggested she rather rake it into piles as it was rather old and dry. 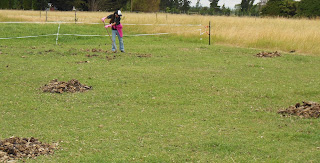 I came out just after 5 to suggest she come in for dinner. She said she would rather get the last bit raked up and then come in. She worked so very hard. After dinner she came back out and carted all the piles away. She only came in around 8pm. What a hard working day she had. 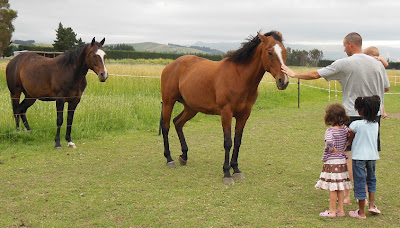 When Hezekiah saw me over the road by the horses he wanted to come over too. So Brendon headed over with them all. Chicken was unfortunately not at all friendly (and blocked their way to the friendlier Porky). When I saw how far back her ears were I suggested they rather keep their distance. Thankfully Brendon managed to get over to Porky so that Hezekiah could at least get a little pat.

And I had a busy day too. I did Roast Chicken for lunch (with 3 big chickens I bought on special this week) and then in the afternoon evening made up the white meat into a huge pot of Chicken-a-la-King. It was lovely to replace the lost frozen meals and I also had left overs of the Roast for Sunday's lunch. So it was my kind of day - one day of cooking for 5 meals. :-)
Posted by Buckland at 10:00 PM