Monday 19th: We got an update from the builder as he works on a fixed price contract for the bank and unfortunately the price is much higher than the estimation. This means I have had to adjust my thinking and realize that the room is not going to be here soon. Once the consent is issues we have 12 months to build - so now to do some more "shopping around" and hopefully find a builder who can do it at the price we have been working on - and get it done sometime before next December.

Tuesday 20th: Off to another (and the last) play centre this morning. This time I did not even bother with the sandwiches and just did the very enjoyable "kiwi dip" with onion and tomato flavours. The tomato is always a big hit and I have to laugh when people ask me for a recipe. It's a kiwi dip I learnt here after all. Just with a different soup flavour - but it is always a huge success. I also had a lovely morning again. It's been great meeting all these new people and I hope to be able to keep in contact with many of them in the months ahead. 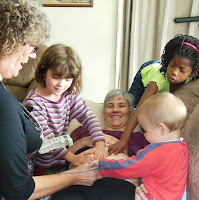 In the afternoon Sandy came for a checkup. They will now happen every 2 weeks. It makes me realize how quickly it is going. Just 2 more visits this year and then we are into the last month.
Baby was moving so nicely that all the children wanted to get a hand on my tummy to have a feel (although baby moves so much you can see it). 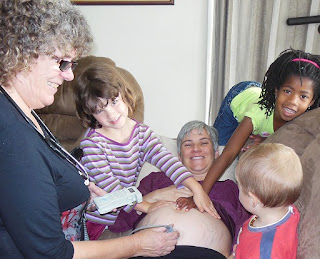 I am always so thankful for these visits and how very blessed we are here with the midwifery care we receive.
Sandy had at first thought baby was breech - but when she listened to the heart beat she agreed with my thoughts that baby is head down. Such a lovely strong heart beat. Everyone got a turn to listen on the fetal stethoscope too it was so lovely and clear. 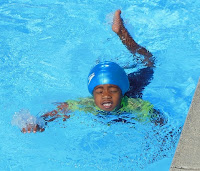 Thursday 22nd was a lovely warm day and although I was sure the pool would be cold (which is was at 19) I suggested we head down for their first swim. 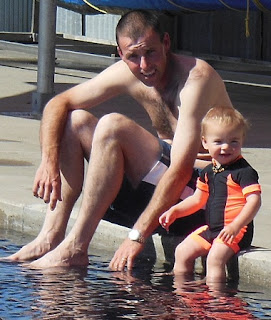 Ruth has been asking for months already when the pool will be open. So I honestly thought today would be for her to just accept that even though it is open now - it's cold. 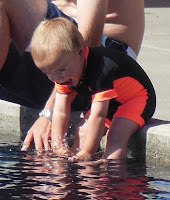 She really did not mind though. She got in really quickly and had such a fun time.
Hezekiah spent most of the time on the side with Dad - at least enjoying splashing. I do need to try and find him some bigger togs though - these ones are now stretched to their max. 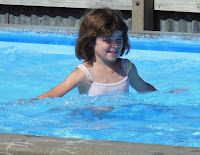 Hannah really surprised me by getting into the small pool and even trying to do a little bit of swimming. Hopefully it will be a really good season for her and she can really enjoy the water (even if she never gets any water on her head). 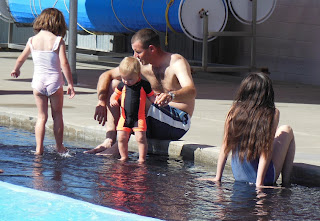 It was cold though - so both Hannah and Rachel did not last as long as Ruth did. They both spent some time on the side with Dad - warming up in the sun. 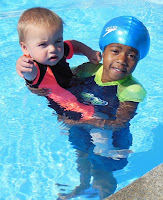 Hezekiah eventually wanted to get into the big pool and as Dad was not at all interested Ruth took him in. It just shows how much Ruth has grown since last year. Now she can stand on flat feed and still have her shoulders sticking out.
As soon as Hezekiah saw me with the camera - he wanted to get out. 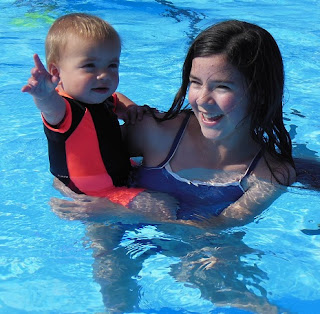 And then as soon as he was out he wanted to get back in. So this time Rachel took him in. He again did not last long - but long enough for me to get this lovely photo of Rachel. It's my favorite.
Hezekiah had a rough night on Thursday night. He was very congested and coughing quite a bit. I eventually got a good 3 hours solid sleep. So on Friday morning I stayed home with him and the older girls and Hannah went down to Play Centre on her own.
The concern at this stage is that Hezekiah was fully exposed to whooping cough at some point over the last few weeks. During ballet lessons every week one of the mothers comes with her younger children to our home. We always have such a lovely time visiting and it's been great for Hezekiah to have someone around that is smaller than himself. We had noticed the one week that the child was very congested with a runny nose. We tried to be aware of what toys he was chewing on but were not going to overreact. It was over the next week or two that he was then diagnosed with whooping cough. So we know he was exposed to it (during the contagious time when no one knows it's there) and so we will boost him with extra supplements and pray that he would not get sick.
(Note: Hezekiah's cough hung around for a while and so we had him tested on the 29th for whooping cough. The tests where negative - so it seems his body has been able to fight it off which we are very thankful for.) 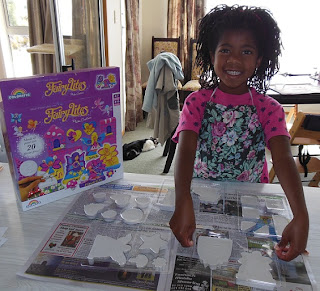 The advantage to staying home on Friday for Ruth was that she finally got to work on the molds she got for her birthday. This is one reason I am really looking forward to the "school room" - but was glad we could make a plan in the kitchen today for her.
I do look forward to having a dedicated art area in the home though. And hopefully within the next year we will be able to see it happen. It's great to know God has every tiny detail in His hands and His plan is the best plan. 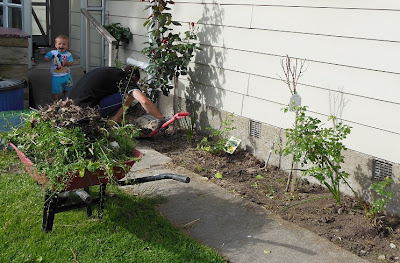 Saturday 24th: Brendon was pleased to have a lovely clear day so he could get more weeding done around the house. This bed had gotten rather out of hand (the wheelbarrow showing how much needed to be removed) and it's so nice to have the roses finally taking centre stage here.
Hezekiah again just loving the time outside with Dad.
Posted by Buckland at 10:00 PM