Solar eclipse and out for a run 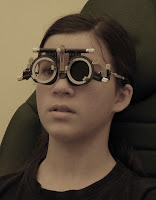 Monday 12th: Brendon took the day off so that I could take Ruth into town for a follow up at the hospital after her hernia repair. It all looks great.
As we normally do - we planned as much as we could for the day and got Rachel's overdue eye tests done again. We were very pleased to learn that there has been no deterioration and her glasses are still the right ones for her. It's been 2 years since she got them - so we are pleased her eyes have not gotten worse and that her glasses are still so well looked after that we did not even have to worry about getting new ones.
While we were at the hospital I decided it would be a good idea to get my 28 week blood tests done at the lab (as it's just over the road). I am so glad we did this as we met a lovely lady from Malawi who will be going back to Malawi next year with her Kiwi husband and two children to run an orphanage. Hopefully they will even come out and visit us over the December holidays. I love how God plans all these little details.
We also took Brendon's cello to a friend to have a look at on our way home. He was tuning it for me and another tuning peg broke. Now the 3rd one. His tuning pegs are definitely metal (and not plastic like Brendon's) and so he will try and see if he can locate a 2nd hand set of pegs (or even a 2nd had tailpiece). For now Brendon can keep playing on the 3 strings that are still on - but it's rather frustrating.
Tuesday 13th: I did another XFM at another Play Centre. It was great meeting the mothers and again finding that there are so many people who are struggling with health issues. Hopefully some of them will try the products and see great improvement. 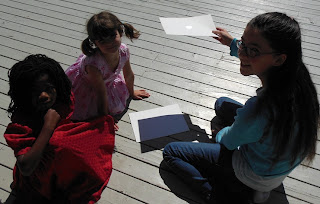 Wednesday 14th: It was late morning and a beautifully clear day when both Rachel and I felt it was getting dark. I noticed we were both going around making sure all the curtains were open and then I clicked - solar eclipse. 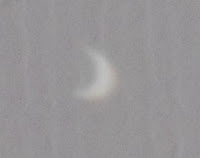 The Internet (and facebook specifically) are such wonderful tools and I was quickly reminded how to make a "pin hole camera" so that we could "see" the eclipse.

I was impressed at how well it worked. The girls went back out later to see how it changed and eventually was back to it's full circle.
Especially because I had not known it was happening today I was really pleased we got to see it so well. Sure -having a welders mask lying around would have been even better - but we are thankful for what we could do. 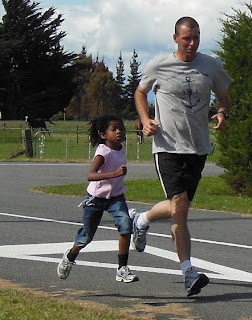 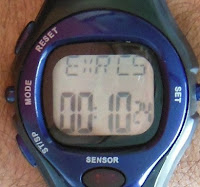 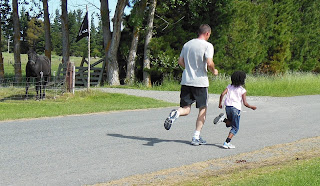 It's going to be really fun to watch how her running develops over the months ahead. I think Brendon is going to also really enjoy getting back on the road. Especially having someone to coach. And check out Auto (the horse Rachel rides) having a look at them as they go past. 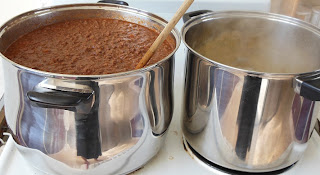 One of the items on my shopping list on Monday was a nice BIG pot. I managed to get two as they were on special at almost half price. I also bought some beef while we were in town (I had planned ahead and had the chilly bin with for bringing it home). So Friday saw me cooking up 7kg of mince into Bolognese sauce. It's great to start filling up the freezer with meals again. And to be able to do 7 meals in one go was an extra treat for me. Do you get the clear impression I don't actually like cooking...... If I can get away with doing as little as possible - I will. So these big pots are going to be great. 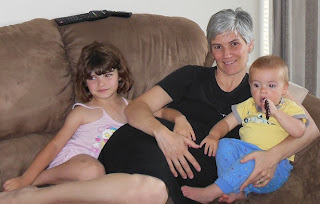 Often over the weekend we watch a little bit of TV with the children. The latest programmes have been New Zealand's Got Talent and Masterchef USA. It was a typical lazy Friday afternoon today though - so we watched one of our recorded programmes today instead (so nice that they are recorded as we don't need to watch any adverts). This is the typical spot. Me lying on my side with Hannah in her favourite spot next to me. When Hezekiah woke from his nap he insisted on joining us. He is quite jealous of me when Hannah gives me affection. He has learnt though that he needs to share me and can't push her away. I was chatting to a friend about this as I have been wondering what it's going to be like with a new baby. I have never had such a clingy baby before. She assured me it was because he was a boy. She said with her children it was also very clear - the boys are far more attached to mum. So from that perspective it's going to be a totally new experience for me - having a clingy little boy and a baby in the house. Just 11 weeks to go now.
Posted by Buckland at 10:00 PM