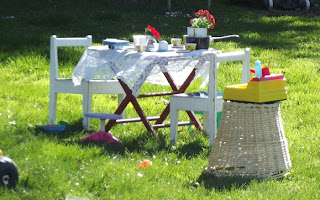 It was so good to be well enough to enjoy the beautiful day on Tuesday and the week just seemed to follow with the same. On Wednesday I had hoped to perhaps surprise Brendon with getting the grass cut but the ride on would not start. It's getting rather long now - but the ground is finally drying out. 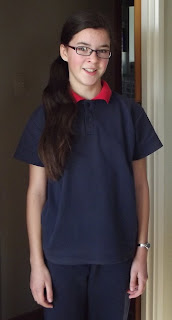 Rachel has been looking after a neighbours chooks while she is away this week and when Rachel walked up on Thursday she met a different neighbour (one of the girls from the Music Festival practices) that had just gotten back from the dentist and was not going to bother going to school and was already bored. So they asked if she could come and play and spent a number of hours of fun outside together. Included in the game was this restaurant. They had so much fun.
On Friday Rachel was VERY excited about the Music Festival practice in town. They left at 11am and got back at around 4pm. There are many schools involved in this and although almost all the practising is done at the individual schools - they do at least have this combined practice before the day. Rachel borrowed some school clothes from a friend so that she would blend in. 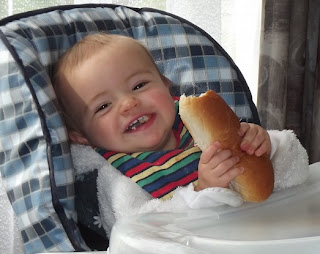 When she got home she changed and got busy helping the rest of the family in the garden. Brendon managed to jump start the ride on when he got home from work today (thankfully it was just the battery) and so with our team effort we got it all done. So that means more free hours over the weekend. :-) 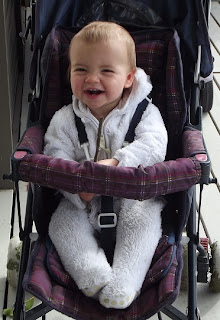 Saturday was a little chilly to start out but was another enjoyable day outside for Hezekiah and the girls with their Dad. Ruth and I did a bit of shopping before our special "morning tea" and surprised the family with hot dogs for lunch. Hezekiah was thrilled with getting his own roll.
Although Brendon had to work this morning he was home by morning tea time. Again it was a little chilly in the morning so once he had had a cuppa and Hezekiah was up from his nap - they headed out again. This time to fill the wood box. Hezekiah was happy to just watch from his pram - with a stick in hand mind you. He really does just LOVE being outside. 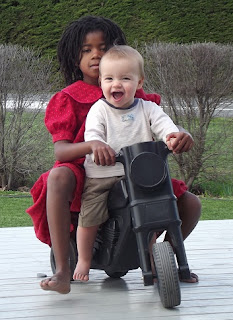 After lunch it warmed up nicely and Hezekiah and the girls played so nicely outside (giving Dad time to do some weed eating). Hezekiah so enjoyed the bike ride with Ruth. Ruth looks like quite the serious driver though. ;-) 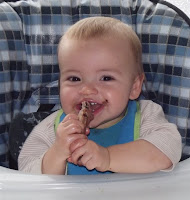 It was wonderful to plan a BBQ for dinner today. It just smelled so nice and it made me realize how much I am looking forward to all the salad and easy meals in summer. Especially with Brendon doing most of the real "cooking" on the BBQ. My only challenge now is to work out what Hezekiah is going to eat at these meals. He was quite happy with a bone to chew on and meat from Dad - but did not fill his tummy enough as he was not interested in the carrot salad or couscous. A banana had to fill him up later - but I do hope I can work something out that makes these meals still nice and easy.
Posted by Buckland at 6:45 PM