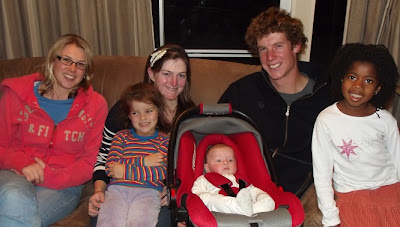 On Monday we had Rob and Jenna joins us for dinner along with Holly. Rob has worked on the farm with Brendon for quite a while now and although we met Holly when we first arrived she has been living up in Auckland and only recently moved back to the area to work on the farm too (her father is one of the owners). Holly has known Rob and Jenna for many years - so it was great to have a catch up with everyone. They have little James who is 3 months old - he was born just after we got back from SA.

Hezekiah's 3 new teeth are really pushing out now and on Tuesday morning I even noticed the one was really red. He has also started with a bit of a runny nose (perhaps because of the teeth) and so we dropped the two younger girls at the play centre but then came home so that he could get an early nap.

The girls normally go to Play Centre on Friday but as they had a special "trip" today they joined in. They walked up to the local school so that especially the 4 year olds can get an idea of what it's all about before they start attending when they are 5. Even though our girls won't go to school - it was still a nice experience for them to go and see what it is like. 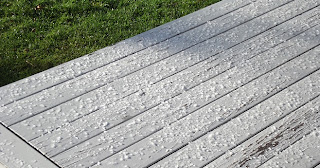 When I headed out to take the above photos as they walked past our house I noticed all the ice on the deck. And that still at 9:30. 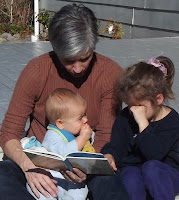 Thankfully it does warm up more by lunch time and so we have gotten into a new tradition of spending some time in the sun after lunch. At least on the days when it's warmer than 5 at lunch time. :-) Hezekiah just loves being outside too. So although yesterday he was able to crawl around on the grass - it was wet today - so he just sat and chewed on some toys while I read to Hannah. 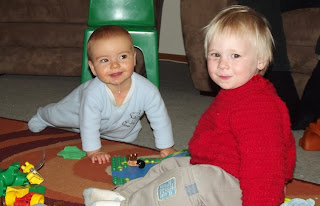 Another regular to our week is that we have weekly guests while Rachel has her ballet lesson. One of the girls in her class comes from half an hour away and so Rowan and his mum (Rachel) come and stay warm at our place until the lesson is done. It was so cute watching Hezekiah with him today. He had such big smiles for him (despite those teeth and all the DROOL). Rachel is expecting her 6th child any day now - so our weekly visits may not happen for a few weeks until she is back to doing the ballet run. 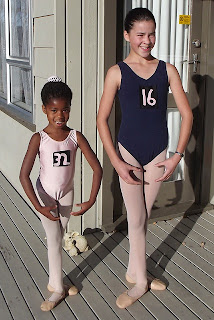 Wednesday morning was a bit of a different morning as the priority after breakfast was getting the girls ready for their ballet exams.
Thankfully one of the mothers was able to take Ruth and Rachel. 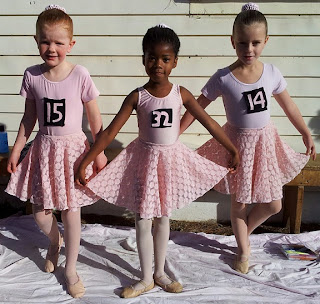 For the last 4 years I would buy pies for lunch on our way to the exam. Thankfully the mother was happy to stop for the girls to get pies - and so even though I was not a part of it - the tradition was kept up. :-) And I even got a photo of Ruth and her group before they went in. 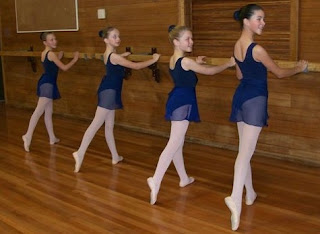 The ballet teacher sent me this one - they are hoping to get it into one of the papers. Looking so lovely.
On Wednesday evening we finally got some nice quite time to chat to the girls about why Mum popped out on Monday morning when Mrs Spencer was here. Rachel already knew from Monday - but it was fun getting the little one's reactions. Brendon asked Ruth how many extra spaces we had in the car. She said "2" and he said "soon there will only be 1". She immediately looked at me and asked if I was pregnant. Clever little girl. We all then had so much fun laughing as Hannah said "it's going to be a boy" "no - it's going to be a girl" and then started coming up with all different names. 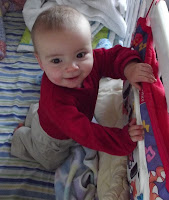 Hezekiah loves getting up onto his knees so he can get hold of things properly. Getting so big.
We attended a lovely big party for two 5 years olds on Saturday morning and although I had my camera with me - I ended up chatting so much I did not get around to taking even one photo. 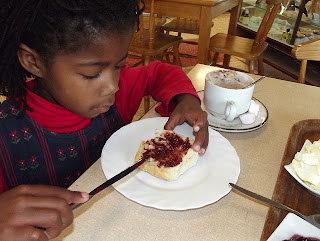 It was Ruth and I off for a scone at the tea rooms this weekend. This time the lady gave us two plates and knives and Ruth was very pleased to do her half "on her own". And as could be expected - she put her marshmallows in a serviette to take home for her sisters. :-) 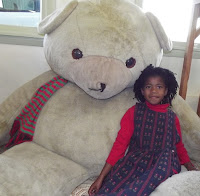 We sat on the other side of the tea rooms this time (as there was a very arrogant loud man on the other side) and so we got to spot this lovely big teddy. His name is Ben. Ruth read the sign to me and as it says he likes getting cuddles and having his photo taken - we obliged. Another one with Hezekiah up on his knees. 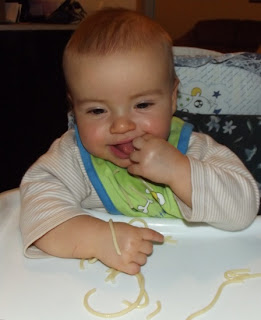 On Saturday it was great catching up with a mother I have not seen in a while. Her daughter is just 2 months older than Hezekiah. She only started on solids at 8 months and went straight to finger food. So it inspired me to try and get Hezekiah more used to different textures and "feeding himself". I really love what she has done though - I wish I had known about it sooner. No puree for this little girl and she has just learnt to chew right from the start. Maybe I will get to try it with the next one. 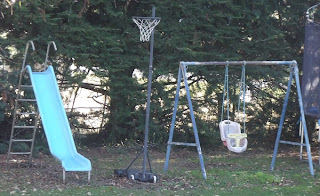 A friend organized for us to do a meat swop (with me needing to get more red meat for Ruth's iron levels and us having loads of pork) so Brendon picked some up on Saturday evening. It was lovely to make a HUGE pot of bolognaise sauce on Sunday (and have 3 extra meals for the freezer). This wonderful friend also offered us their slide and swing (as their children have outgrown them). So on his way home from work on Sunday Brendon went to pic them up. The play area in our garden has expanded. :-) Hannah had been "making" a slide out of a plank and a plastic table. The table is not that strong and so I said I would try get her one from the toy library. When they did not have one of Friday she was so upset. So this was a lovely blessing - especially the slide for Hannah.
Posted by Buckland at 9:00 PM

No spaces if it is twins ;-) I also breastfed Ciara and Ayla for a lot longer. I think Ayla only started on solids at nine months, and it does cut out that puree stage, I think she just went onto lumpy food, and before you know it they are eating the same as the family.