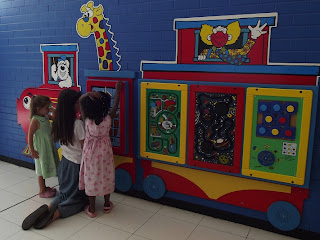 We had a longer stop over in Sydney on the way home (even though the total traveling time was the same). I got to use free wifi for the first time which was fun for me (and a nice quick way of letting everyone know how we were doing). We were pleased when we saw a sign "children's play area" and the a bit disappointed when this was all it was. 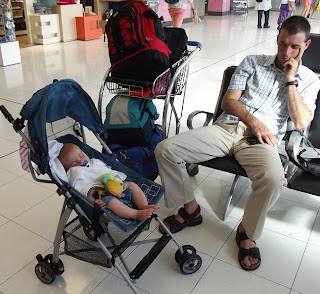 At least it kept the girls entertained for a little while and Brendon could enjoy a little nap. We were able to borrow this pram for Hezekiah which also made it much easier to spend 5 hours in an airport.
Once the girls had tried everything out we headed over to MacDonalds as they had a proper play area (and I forgot to take any photos). We stayed based there for most of the waiting time and thankfully they were not too busy for us to stay even once our food was finished.
We had "breakfast" on the plane before we arrived in Sydney after every one's nice sleep. So although it felt like lunch at MacDonalds we told the girls it was actually dinner. We had arrived at 2:45pm and were leaving at 7:45pm (Sydney time). 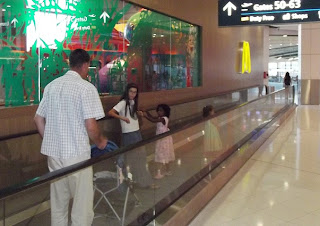 We bought a pack of Uno at one of the shops and enjoyed a few games to pass the time which was also fun.
This "moving path" was next to MacDonalds - so even though it was heading in the wrong direction the girls had a "turn" before we headed off to our gate. 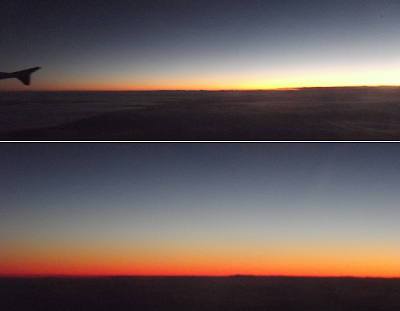 It helped that it was getting dark when we left and we enjoyed watching the sunset. It's hard to get a really nice photo through the windows - but it gives you an idea of how pretty it was. 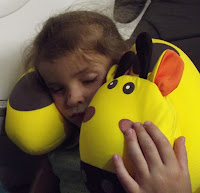 I was pleased that once the sun had set Hannah fell asleep really quickly. I sat with the younger girls on either side of me.

Brendon had Hezekiah sleeping on his lap to start with and Rachel had a fully charged e-reader that kept her entertained. 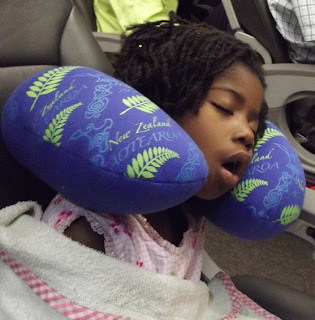 At one point Hezekiah needed to drink - so I had him and Brendon was having a little dose. Ruth was sleeping happily but suddenly woke and I could tell she was going to get sick. With my hands busy I quickly called for Brendon to get her a bag (and he made it just in time). The poor girl. She then swapped with Rachel so that Brendon could help her. She had some water to drink but then got sick again. On the car trip home everyone was awake and asking for something to drink. We stopped at a garage to get a drink for them to share and then Ruth got sick again. Thankfully we had a packet in the car - so we managed to keep it contained every time.
(Looking back a week later we realize it was more than likely a bug that caused this and not motion sickness. If we had known that we would not have let them share the drink.) 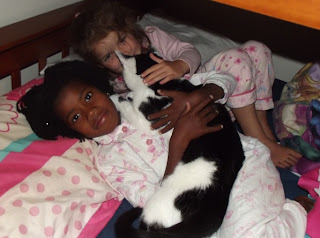 Our flight was really quick though and so instead of arriving at 12:45 we were through customs by that time. Not to mention the fact that they had a "family" line at customs which helped us get through there really quickly too. Steve had stayed with his mother in Christchurch and so after a quick call (to let him know we were early) he arrived to pick us up by the time we had gotten to the pick up / drop off parking. By 2:45am the children were all in bed (even being awake enough to get into pjs - it was chilly too so warmer clothes were needed). It was lovely to have Patches waiting for us and so excited to have us home.
Hezekiah was the only one to struggle to get to sleep. It was after 3:30 with him in bed with us that we finally got to sleep. So all in all we had a really good trip. The only trouble was for poor Ruth but she handled it well and it helped to have Patches to cuddle when we got home.
Posted by Buckland at 4:00 AM