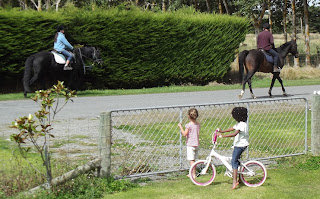 On Saturday morning Rachel went for a nice long ride with Christine (about 2 hours). Rachel was excited about taking the saddle bags along with lunch too. Christine is happy enough with Rachel's riding now that she no longer needs the lead rope. She even pointed out some places where Rachel could do some jumping on future rides together. Rachel is in her element. She is so thrilled to be having all this time with Auto and she does not even mind all the work that goes along with it.

A cuddle from sis.
Hezekiah had a rough weekend unfortunately and with a bit of a runny nose and a runny tummy and running drool these teeth have been taking their toll. So after just one week back from our trip I was exhausted. Brendon had to remind me of how much my sleep has been disturbed by Hezekiah's teething trouble and so I have had to make an effort to get a quick 15 - 20 min nap in each afternoon when Hezekiah has a nap. It's made such a difference and his teeth have settled down again which also helps. 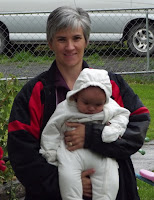 On Tuesday it was drizzling a bit but not enough to keep me from walking the younger girls to play centre. I just bundled Hezekiah up and he quite enjoyed the outing. 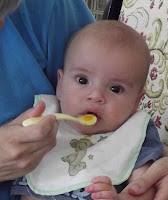 Hezekiah had also been drinking more regularly lately (as well as waking at night again) so after giving it a couple of days to perhaps settle I decided it might be time to start him on solids. So on Wednesday he got his first taste of food (other than the biltong he chewed on in SA).
Thursday we got to cut the grass again. We were really thankful for a lovely sunny afternoon to get it done. The weather reminds me of previous Autumn weather were you are not able to keep up with the grass cutting as it just grows so quickly.

On Friday the younger girls went off to play centre, Rachel headed off to the horse and I stayed to get a couple of photos of the lady who came to spray the house (before heading off to play centre too). I know not everyone is in agreement with spraying - but at the previous house that we were at we saw what happens if you don't spray for a number of years. Brendon would clean the hundreds of cobwebs off the outside of the house and within a couple of days they are back (not to mention all the spiders regularly coming inside). 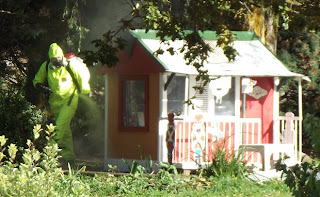 She even sprayed the girls "Rose Cottage" so hopefully they won't have a build up of cobwebs and spiders there either.
As we had to stay out the house for 4 hours (and leave it open and airing for at least 30 min before going in again) we had a picnic lunch at the play centre after everyone had left. 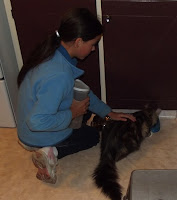 Then we were off to town and when we got home Brendon and Rachel headed over to the old house to look for Tiger. Brendon had seen him there before but he had been too scared to come to him. This time armed with his food container (Rachel shaking it to get his attention) he came running over to her and was more than happy to get in the car with her and come home. We were so relieved that he was safe and finally home and as affectionate as ever. I was concerned that he may have gone wild in his month away from us - living on his own. What an answer to all our prayers. Thank you Lord.
Posted by Buckland at 9:00 PM