Monday: Hezekiah was a bit unhappy last night before he went to sleep so we put JAM on (a music video - Jesus And Me). Within minutes we heard a call from the bedroom asking what we were watching. Hannah asked if she could watch JAM in the morning. So after breakfast she I put it on and she danced for Hezekiah. 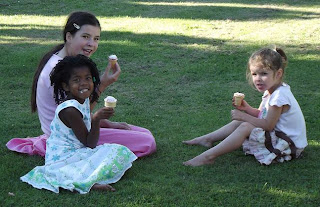 The countdown to our move has definitely begun. It's been great to get some sorting and packing done every day. What a good opportunity to start working on the ice cream in the freezer too. I can see ice cream pudding happening every day this week. :-) 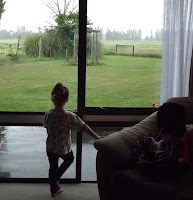 Tuesday: We all really enjoyed the thunder storm this afternoon. It reminded Brendon and I of SA. It had been terribly hot and it was wonderful having the lovely cooling rain. It was a first for Hannah and Ruth though (a lovely big afternoon thunder storm where the house is even dark because of it) and dear Hannah says to me "Mum - be careful when you come down the stairs". She thought the thunder would make it dangerous in the same way an earthquake does.
So I explained to her that the thunder was just a noise and it could not hurt her. A bit later she was chatting to Hezekiah and saying "are you scared of the thunder? Don't worry - it can't hurt you."
Poor Ruth. I am tightening her braids (doing just a little bit every day) and she said today "I wish I wasn't African. I wish I did not have such difficult hair". :(
She does not want to shave it off though and it is getting wonderfully long. So she puts up with it. Thankfully we don't have to do this too often and it's a lot better than combing it out. I put this on facebook and was so surprised by all the lovely comments from friends about how lovely Ruth's hair is. I think she is feeling much more positive about it now.
Wednesday: A very busy day today with Kerry and some of the children visiting in the morning (which was wonderful) and then an appointment with the homeopath in the afternoon. Hezekiah's fungal / thrush rash has just not cleared up and so I took him to her. I also managed to stock up on medication for Brendon (who got a headache again today) and Ruth (for her hay fever and the sore legs that are bothering her again).

I borrowed a box full of DVDs from a friend for this week. So the girls have had LOADS more TV than they normally do. It has helped me to get a lot more sorting and packing done. Kerry had an appointment to go to and so we had a couple of the children here while she was busy. I put a movie on for them and managed to get loads of packing done which was great.

We were back quite late but Brendon had the fish and chips cooking and ready when we got home. He had also asked for a list of things to do once he was home (he gets home at around 3 and we were only home around 6:30). He brought the washing in, burn rubbish, packed up the girls computer and vacuumed upstairs. It was wonderful to come and up and have half the room done and dusted. I still need to work on the rest of the room - but it's great to see that half finished.

Thursday: Loads of sorting and packing got done today. I asked the younger girls to get their sandpit stuff sorted and packed into a box. A little while later I saw all the little cakes they had made along the edge. I then reminded them that they were supposed to be packing. 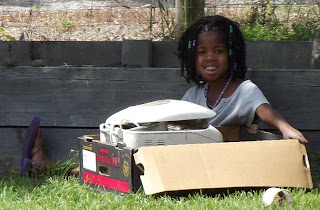 I noticed Hannah then came in and left the "work" up to Ruth. If you double click on the photo you can see a bit more detail and you will notice that it almost looks like Ruth has a gap in her bottom teeth. The tooth is not out yet - but the big tooth is definitely pushing it's way up. The big tooth is behind the little one though (in the correct place in her jaw - remember how bad her bite was from the dummy). So she knows she really needs to wiggle that baby tooth out. 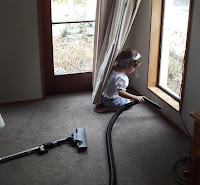 And don't worry - I did not let Hannah get out of work. I asked her if she wanted to do some vacuuming for me and she was so excited to help. Rachel and I had taken Hezekiah's cot apart (much easier to move) and so she cleaned up before we put the camping cot in that spot.
We had another thunder storm this afternoon and there was a lot of thunder before the rain came. So it was nice to see Hannah playing outside and not worried about it but rather excited and singing about it. We are hoping they get to see a lovely lightening display while we are in SA. It's light till 9pm here - so they only get to hear the thunder. 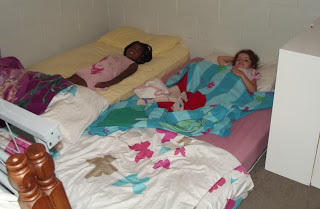 After dinner the girls had ice creams outside and Brendon and I took the bunk beds apart (much - much easier to move). So the girls had a night of "camping" like Rachel with their mattresses on the floor.
We start moving tomorrow afternoon and have decided to get the beds in first and basic kitchen things and then whatever does not get done on Friday can be finished off on Saturday morning. The girls are SO excited about sleeping in the new house TOMORROW!!!!
Posted by Buckland at 10:00 PM