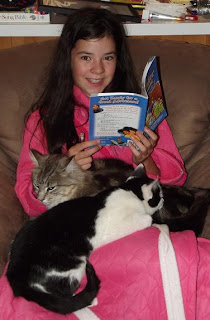 When Brendon works on a weekend (every 3rd) he is allowed to take the following Friday off and not take leave for it (more like unpaid leave). For the first time he decided to take the day off on Friday so that he could get some more packing done. Even without Dad waking her up before 6am when he leaves for work - Rachel was up by 6. Both cats getting a cuddle while she reads her bible and devotional book. 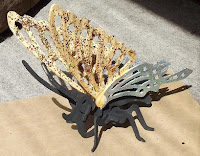 I had planned to take the girls to play centre - so we left Rachel at home with Dad and headed off. I am glad we went as we were the ONLY ones there. The teacher enjoyed the quieter day and just loves spending time with the children making things. Ruth got to paint her butterfly puzzle. It looks great. 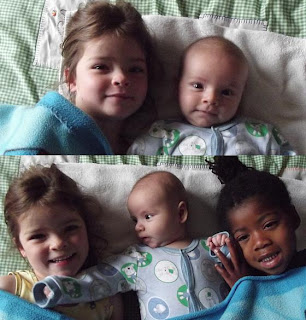 Dad had another well deserved sleep in on Saturday (only getting up after 7:30 which is REALLY late for him as he is normally up at 4 or 4:30). I got some nice pictures of the younger girls as they came through and said good morning to Hezekiah. 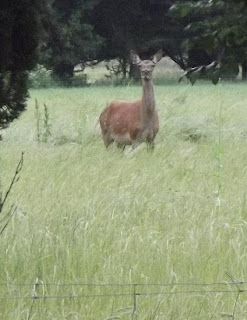 A little later I got an excited call from the girls to come and see the deer in the field next to our house. I don't know where she got out from. There are a couple of deer farmers around the area but normally the fences are really high. They were so excited though. I can't wait for their excitement when they see all the antelope and other animals during our South African holiday in Feb. Brendon's parents have organized 5 days at Mabula - our all time favourite game reserve. I am so looking forward to it myself. 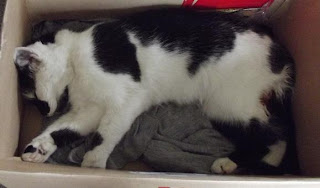 The negative for Saturday was that poor little Patches was attached by a wild cat and her back leg was badly hurt. Brendon eventually took her to the vet in the afternoon. The vet on duty was up at Cheviot - an hour North - so it was a change of plan for almost 3 hours of his day. Ruth went with him though and the vet gave her instructions on how to look after Patches. Ruth will be giving her tablets for the next 5 days. He had to sedate her in order to examine the leg properly as she was just in so much pain. She was still sleeping when they got home. Poor thing. 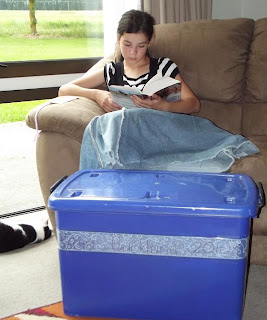 Rachel was told she had to do a Jamboree packing practice by the end of the weekend. It was a good way of making sure everything has been labeled. She is in the light blue group - so we used light blue ribbon with her name and ID number on. This is the box everything fits into including her bedding. As she will be going on an airplane she is only allowed the one item with specifics on size and weight. She does have her day bag with raincoat and lunch box that she will take on the plane.
You can also see the HUGE book she has been reading over the last week or two. Almost through it now. She has really enjoyed it.
You can see Patches lying in the sun there. She is still not putting any weight on the leg but is looking more herself which we are all pleased about.

We got quite a bit sorted in the library this weekend. Six bookshelves are now unpacked, cleaned and ready to be moved. 18 boxes packed. 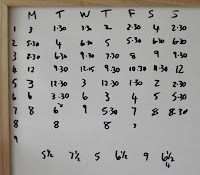 We are now using the library to just store things that are ready to go. Thankfully the art shelves (to the left) are still accessible so that we can carry on working on our Jesse Tree plates.
Hezekiah went 9 hours on Friday night which was great. Still no clear pattern but at least the nights are getting more regularly longer.
Posted by Buckland at 9:00 PM