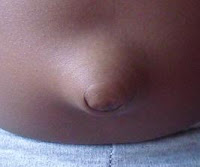 The summary of today was that Ruth's umbilical hernia op went well. I include some photos for those don't know what it looks like. This is at it's smallest - sometimes it pushes out quite a bit further.
We got a call yesterday letting us know that her arrival time was in fact 4:15pm and not 10am. So I re-made the original appointment I had in Rangiora at 10am and Ruth and I dropped her sisters at a friend by 9am and headed into town for a day together. After the appointment we got some shopping done as well as a few town errands.

We bought a homeopathic remedy which is really good for recover after operations and Ruth enjoyed spending a bit of money at the $2 store. A special treat for her for being such a brave girl. We stopped by the Chinese shop to buy dinner (Ruth's choice) so that we don't have to worry about getting it after the op. I think the thought of such a nice dinner helped her with the bit of hunger through the day at only having breakfast before 8:30. 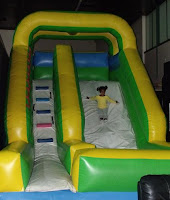 Then we headed over to Chipmunks (an indoor play area) to spend the rest of the waiting time. Thankfully it was not too busy and Ruth got to enjoy all the different activities. This slide was the smaller of the two - there was another two or three times as big. So much fun. And a good way to distract her from her hungry tummy. 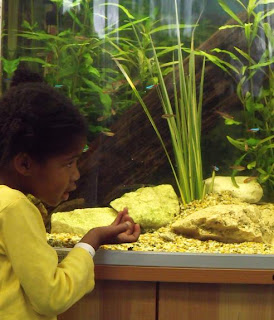 I had called the hospital this morning to let them know we would be in town this afternoon. I was hoping we may get called to come in earlier if there were any cancellations. And there was. We got a call at 2:15 to ask if we could come in right away. So we headed over. We only had about an hour wait during which time she got her bracelet, got weighed and had a chat with the anesthetist. The nurses and doctors were all so very friendly and helped Ruth to feel relaxed. The fish were lovely to look at as well as all the books and toys in the waiting room. 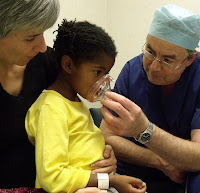 At 3:30 it was time to go. We walked to the room where they give the gas (not the operating room - just an in between room with her bed ready). The nurse asked if she wanted to be on the bed or on my lap. She chose my lap. When the anesthetist came in he first showed her the lovely pink breathing piece he had chosen for her. Even Mum had a smell - lovely strawberry flavour (no pipes attached at this stage). 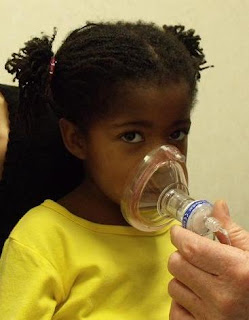 Then the pipes were all attached. Ruth stayed wonderfully calm and it was great having her on my lap - giving her that comfort and encouragement she needed.
In the next picture you can just see the doc holding a green bag. When I had told Ruth I could see her lovely big breaths he then held the bag up and showed her how she was filling the bag every time. This helped her to relax and watch how it went up and down. 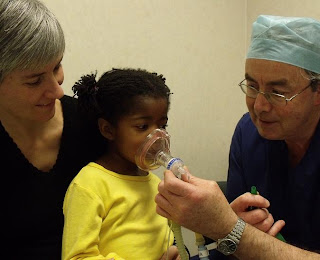 Then the doc asked her "where do you like to go?" She said "I don't know" but I reminded her about how she loves swimming. Seconds later she was falling asleep. This was more dramatic than I had expected. Her legs started kicking out a bit and it was quite scary to watch. The doc told the nurse not to hold her leg - but to let her just move as she needs to - just making sure she does not hurt herself. Then we got her in a lying position on my lap and I heard this horribly sound coming from her chest. I think it gave me quite a fright but the doc immediately said "she is just snoring - it will stop soon" and it did. I then remembered that Ruth can have a chesty breath at night sometimes - so it put my mind at ease. It did indeed stop quite quickly though and so he gently picked her up - warning me that she would look a bit like a rag doll. Both doc and nurse said "give her a big kiss" so just for myself (as she was fast asleep) I could show that little bit of love and concern I have for her. How wonderful to have that lovely support from the medical staff - not taking it as a routine event in the day but a very traumatic event for Mum.
One of the three nurses then took me back to the waiting room and around to the post-operative waiting room area. She then got me seated in one of the lovely big lazy boy chairs and got me some juice and biscuits. Thankfully there were enough boxes of tissues around too as I got quite tearful. How blessed to have someone making sure you - as Mum - are ok too. There was another family in the waiting area and it was nice chatting to them - hearing from the mother than even though this is not their first time here she feels exactly the same as I was feeling. It was my very first time to have one of my children have anesthetic and on top of that we don't have any family history for Ruth. The anesthetist knew this though - so he was watching her extra carefully knowing that any family problems with anesthetic could crop up. They didn't though - and it all went fine. It was only about 20 minutes later that the surgeon came out and updated me on how things had gone. The hernia was much bigger than he had though when examining it externally earlier this year. It was easily the size of a table tennis ball. So he told me how they had sewn it closed and then taken another flap and sewn over it again - making it double strength. Again he said that it was far bigger than any European child might have - with the Africans being more prone to these hernias. Even though he is a kiwi he had acknowledged the difference with an African child when we saw him months ago - this helped me have a lot of confidence in him - he really does know what he is talking about. He also said that although they don't normally even have check ups with these operations he would like to see her again in a couple of weeks to make sure that it is all healing well. 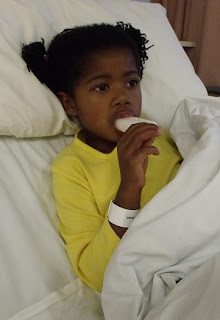 He did also tell me that she was still fast asleep and the nurse would call me to her when she started waking up. It was great to be there with her when she first started opening her eyes. I could tell her that I was there with her and that she could just rest and sleep. Eventually she was awake enough to enjoy the ice block. For a while I had to hold it for her though as it was just too heavy for her tired little arm. She complained that her other arm was sore - where the IV had been put in. The nurse then offered to put a bandage around her arm to just hold it a bit more still (which she did). The nurse explained that as they had struggled to find a vein they wanted to leave the IV in for a little longer just in case anything happened that we needed to get a drip in quickly. I fully understood this - her veins are really deep and hard to get to.
Eventually she was awake enough for us to go into the waiting room with the lovely big chairs. the nurse gave Ruth a selection of videos to watch - she chose Wiggles. I wanted to make sure that she would handle something small to eat and drink (without getting sick) before we started home - so she then nibbled on a biscuit and had some juice. I was then comfortable with her recovery and wakefulness and asked that they take the IV out. This was very painful for her and for the first time today we saw some tears. No crying mind you - just tears welling up and overflowing from her precious little eyes. The nurse was very sympathetic though and she quickly relaxed. 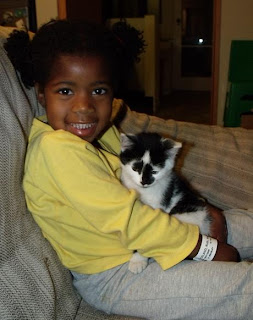 By 5:30 we were on our way home. It took a good 30 min just to get through town and so we were home by 7. Ruth had her portable DVD player in the car and watched Cinderella 2 on the way home (again - her choice). Once we got home she was ready for dinner and thoroughly enjoyed her Chinese food. Then some cuddle time with Patches and so very nice to see such a happy face. As she had a good sleep this afternoon I told her she could stay up a bit tonight. So she watched some American Idol with us and headed to bed at 8:30. I had also told her that she could sleep in the big bed in her room (our old double bed that is there for a spare bed). I did not want her climbing onto her bunk and she was happy to have such a special treat. She slept the whole night without pain which I was really thankful for.
Thank you Lord for answering so many prayers today for my precious little girl and for all the extra blessings You gave to us too.
Posted by Buckland at 9:00 PM