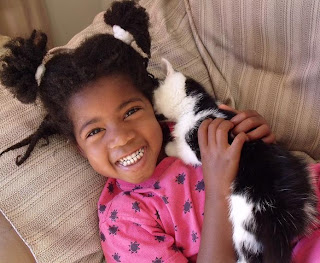 First a fun photo of Patches giving Ruth a bath. She was licking her ear and it was so ticklish. Such a happy face. It makes me smile every time I look at it.

Ruth's hair is also a work in progress actually. We have had two sessions of combing. The first was really important as that back section knots really quickly. The top ponies have gotten smaller as I got a bit more combed and into twists. I really need to get it all done and then decide on the next style. 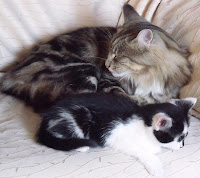 The progress we saw with Tiger today was really encouraging. You can obviously tell this is really important to us. Tiger had been sleeping in his normal spot (which is already an improvement as he has been hiding when inside the last few days) and Patches was sleeping in my arms. So I quietly put her next to him. He noticed her but chose to ignore her - keeping his head facing away from her. 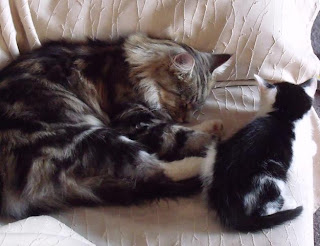 But ten minutes later he had relaxed enough to put his head down. You can see from this angle that there was plenty of space still between them. But Rachel was just so pleased to see that he would allow his paws to even touch her. We do so hope they will end up good friends. 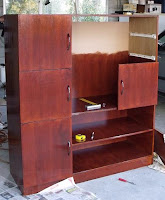 When Brendon got home we got a bit more work done on the cabinet. Finally all the doors are on. We still need to put a little wall in and then put the fronts on the drawers. But it's almost there now and I think it is looking great. We will probably be able to move it back into the house tomorrow which will be great. Those cupboards have been very missed these last few weeks. 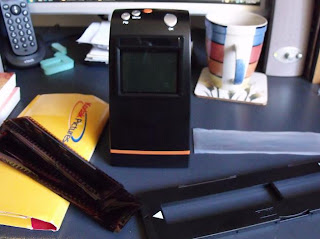 This evening Brendon went to Bible study with Steve and so it gave me some time to catch up on my blog as well as play with my new toy. A film scanner. It's been great to get started - getting my old film into a digital format. I have found almost all of the missing Birthday photos for my facebook album (just Rachel's 4th to find) and have done over 100 photos already. It will be nice in itself to have digital copies of all these photos but it will also make it easier for me to scrapbook. I am a digital scrapbooker through and through. Even if you look at my 2003 scrapbook (which was all film photos) half the pages have been done digitally and I have stuck the printed photo on. So having the photos digitally will make it much easier. My hope in the next 5 months is to get Hannah's baby book finished (about 3 months left to do) and then get started on one for Rachel. She has a "old fashioned" baby book with photos stuck in but I think a baby book like the other two have will be much nicer. The girls love paging through their books and I would love to be able to give that to Rachel too.
Posted by Buckland at 9:57 PM