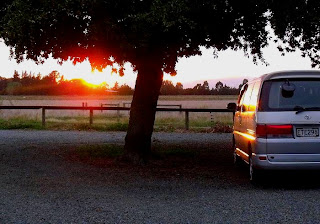 The girls were up early today in anticipation of our of our long weekend in Timaru. This photo was taken at 7:50, so it's understandable that Day Light Savings is going to end soon.
They were disappointed to learn that Dad would do some work on the TV cabinet before we left and that we would only be leaving after morning tea. We decided to rather stick to just lunch on the road so they played happily while Dad got some work done. 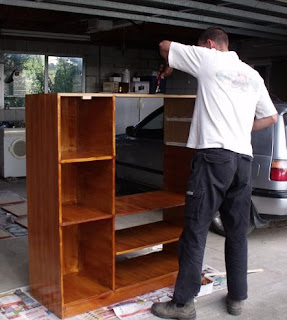 The car was parked outside due to the garage being used for the varnishing. Unfortunately we did not think to let the car idle for a while when we moved it out yesterday and with the cold night the battery was dead when we were finally ready to leave. Thankfully our "little" car could jump start it and it was not too much of a delay.
And the cabinet is coming on nicely. 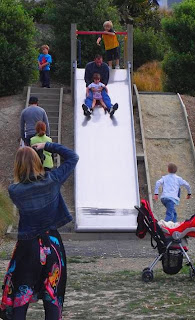 We had lunch at Burger King in Christchurch and hoped that the younger girls might sleep for the next 2 hours of the journey - which they didn't. The movie that was playing on Ruth's DVD player though was more than enough to keep them happy and quiet. We only had a little bit of "are we in Timaru yet" from Ruth. She said she really likes going to Timaru but she does not like the drive there.
We had such lovely weather when we arrived (we expected a lot of rain over the weekend) so as soon as the boys were home from school we headed down to the park / boardwalk / beach. What a lovely big slide. Hannah was brave enough to go with Dad and Ruth went on her own. Rachel did not even attempt it but perhaps next time she will go down with Dad. Lynn got some lovely photos through the weekend. 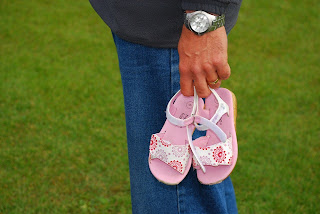 Here is my favourite of hers from this afternoon (at least from the ones that are on her blog - she has loads more). 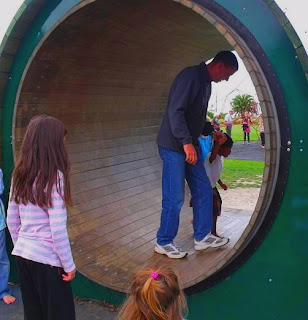 Then it was time to try out the hamster wheel. Rachel was on with them at the beginning but found it too strange. Ruth got the hang of it though. Hannah would not even come near it. Perhaps at our next visit they will all be a bit more adventurous. :-) 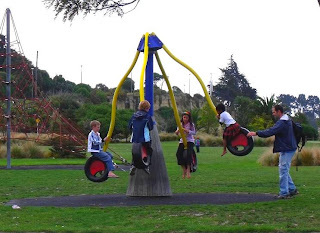 This was such a treat for the girls. This park has so much compared to our local ones. They all had loads of fun on the spider web in the background there. I think we need to plan some more time here on our next visit. 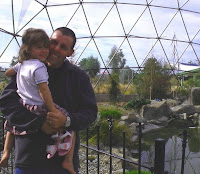 Then we headed over to the walk through aviary. Hannah was so excited about going inside the "white ball". 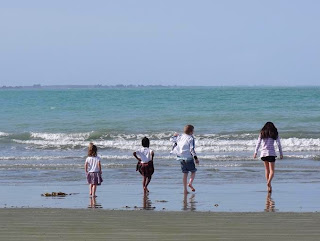 After a bit more walking we made our way down to the beach. We had already been here for an hour but the most fun was yet to come. The children first headed in to see how warm / cold the water was. 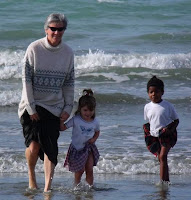 Hannah was a bit nervous about the waves though so would only go in again if she was holding my hand. 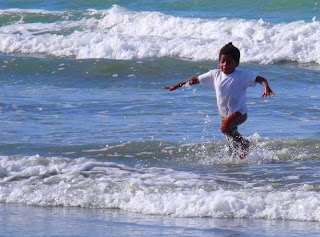 The water was lovely though so we spent ages playing. It did not take me long to suggest the girls just take their skirts off. They had such a good time. We never even thought of bringing togs with. 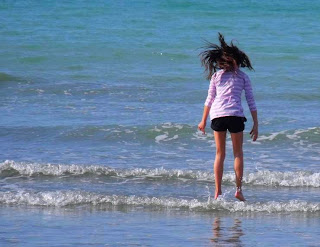 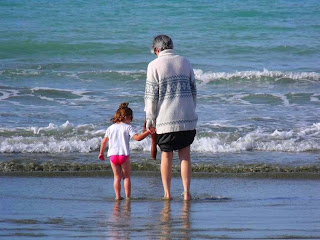 I had such a good time with the girls. It's been lovely to have Hannah be a lot more affectionate with me lately and so I really enjoyed this time with her. 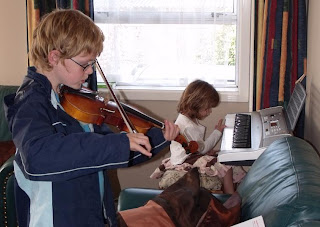 The Clevely's lounge was very soon renamed the music room as the girls just loved the keyboard and access to the guitar and ukulele. They spent hours and hours playing. Often I would hear Ruth on the keyboard composing her own songs. So much fun. 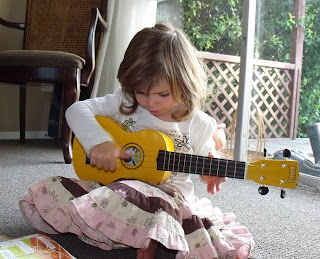 Hannah loved the little ukulele too. It's smaller than Rachel's and fits her so nicely.
My little Maria singing Doe a Deer. :-)
Posted by Buckland at 7:00 PM