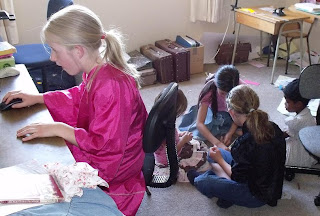 The schools closed early today (at 12:30) so I picked up the Spencer girls from school so that they could spend the afternoon here. There was youth group this evening - so they stayed for dinner and then they went off to youth together.
They played really nicely together and once Hannah was up from her nap she joined in too. We got a number of games out of our library for them to play with (many the girls have not played with in years) but as some of the games were only for 4 players they took turns being the "extra" and got to play some computer games. 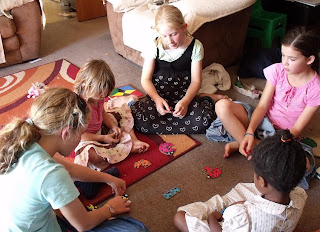 Thankfully there were a couple of games where you could have 5 and it was lovely to see them all playing so nicely together.
I learnt later that while Hannah was sleeping the others put on a play of Cinderella which they all really enjoyed.
Posted by Buckland at 8:00 PM