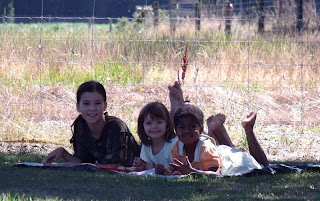 I am already feeling so much better emotionally today and for that I am very thankful. I still have low energy levels though - so I am having to adjust to yet a new routine. It felt like we had gotten into such a lovely routine at the beginning of January and it's been hard to realize that it's not going to be possible to get that back fully for a while. I have to adjust to the low energy levels that I have and just take things one day at a time - putting priorities on things so that at least I can feel that I are working through things (even if it's at a slower pace than what I would like). 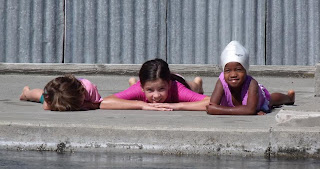 It was nice to be up and about finally so that we could head down to the pool. Brendon would not mind going with the girls on his own but it's difficult with Hannah who often wants to get out before the others. So although I did not swim it was nice that they got to cool off. The water was a bit cold at first - so they lay down on the hot cement to warm up. 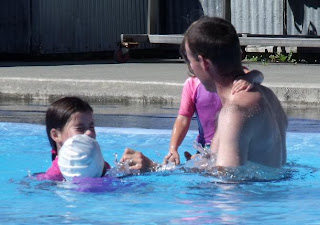 It did not take long through for them to get busy enough in the big pool to keep warm though. Brendon said once you were in the water was lovely. I will take your word for it. I saw how difficult it was to get in. :-)
They enjoyed playing "ring a ring a roses" for a while. We only just put enough air in Ruth's togs so that it just keeps her head about the water so she is getting really fit and learning to move really quickly around the pool. 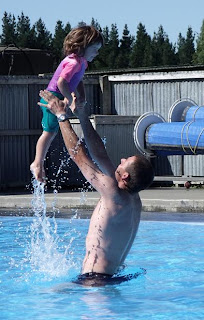 Hannah playing a bit with Dad before she got out. Then she came and sat with me for a while. 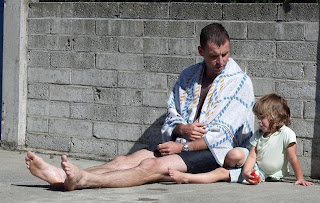 Dad then did 4 lengths and as that exhausted him he got out. Hannah kindly went over to share her apple with him and it was so cute to see them having a little chat.
Posted by Buckland at 7:00 PM