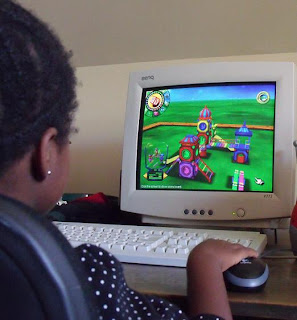 Ruth has been playing computer games for a bit after lunch this week while I have a nap. We have a couple of games that are fully loaded onto the computer (the disk is not needed to play) and so she can get any of those started and change as she likes. Today when I came up she had been playing around on the "101 Kid's Brainy games" and was in the 8-12 year old section. She found this "Magic World Builder" and got to follow the blueprint to complete this playground (as it gets harder you have to add more pieces and start turning the pieces around to fit properly). What makes this extra tricky is the fact that it's 3D and you can move up and down and around to see all the sides of your building. She has quickly learned some of the different things she can do with the mouse (like zooming in and out) and I think she is going to have loads of fun on this. 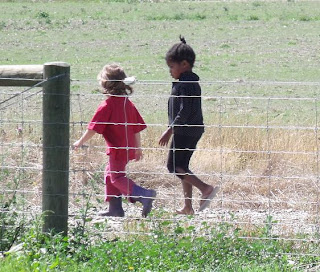 Hannah and Ruth off to meet Dad. He got home just after 3 and was a great help in getting a big pot of beef curry made. He got the food processor going and grated all the apples, carrots and marrows (from our garden). It's great to start getting a few extra meals in the freezer again.
Earlier this week Ruth and I watched a bit of the video "Fearfully and wonderfully made" by Answers in Genesis. At one point the speaker talks about how important iron is for the baby in the womb. So during dinner tonight Ruth said "It's a good thing we are having beef. The iron is good for your baby." Such a sweet girl and so very precious to have her so concerned for her little brother or sister. 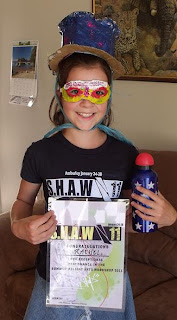 Rachel got home just before dinner from her last day at the Holiday Art Workshop and had done so well that she had won "Best at Drama". She had made the hat and mask for their production of "Hairy Macclary's Rumpus at the Vet." On the first day her group was asked who can read well. Rachel put her hand up. Then they asked who wanted to narrate for the play. No one put their hand up. So the leaders approached Rachel and asked her if she would mind doing the part of the narrator. She was disappointed in not getting to "act" but Brendon explained to her that she was acting with her voice and she actually had a very special position. She felt much better about it all today in finding out that she had won the drama section. And that was competing with everyone in her own group as well as the older children. So well done Rachel. And the most important thing is that you all had so much fun. 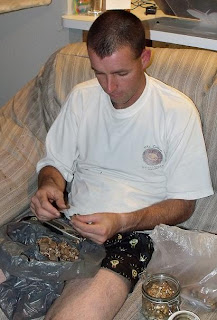 While we watched some of American Idols tonight Brendon cracked some Walnuts for me. A friend had given us a big bag of them ages ago and I get through a few every now and again. This week however I have realized how needful they are now. I have been eating a lot of fruit over the last 3 weeks (snacking on fruit before breakfast, for morning and afternoon tea and again before bed) but after chatting to a friend about how I was not able to sleep through the night because of getting hungry she suggested that I eat more protein - especially nuts. I read about how good Walnuts are in pregnancy and so that was all the motivation needed to get "cracking". I had gotten a few done through the day myself but when Brendon saw the packet he got busy with it tonight and filled the jar for me. Granola bars here we come. :-)
Posted by Buckland at 9:00 PM