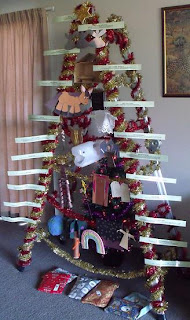 It is surely the strangest Christmas tree ever. Firstly we decided to keep the Jessie Tree up that we made for the Christmas tree festival (with the fiber optic tree behind for the pretty lights) and then there were only 6 presents under the tree this morning (the ones the girls made for each other). But honestly - I think it's the most special Christmas the girls have ever had. I know Rachel has said it was by far the best Christmas for her. What an answer to prayer. To get away from the typical child's desire of getting lots of presents to the wonderful enjoyment of giving presents instead. A wonderful reminder of the most precious gift ever given - Jesus Christ. 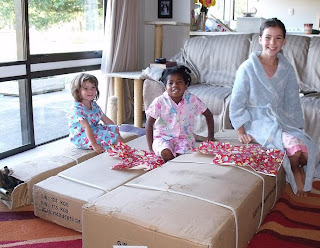 As a gift from Brendon and I as well as Grandpa and Nana we got them a trampoline. The boxes have been outside the back door and Ruth hear us telling someone something about the boxes and so she had worked out that the big box must have been for Rachel, the middle size for her and the small one for Hannah. I am glad there were three boxes. :-) 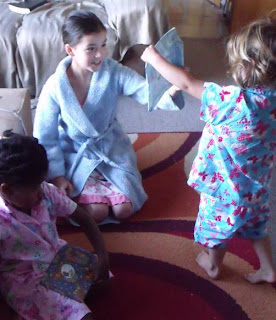 But first it was time to hand out their presents. As soon as Hannah woke up this morning she said "Give Ruth her present?" So that was first priority for her (even before breakfast).

It was just wonderful to have Hannah so excited the whole week about Christmas. And the excitement was not about getting presents but about giving her sisters the presents that she made for them. I bought simple plastic photo frames and she decorated them beautifully. Ruth's is on the left (with Ruth's own butterfly and flower stickers) and Rachel's on the right (with a horse sticker). 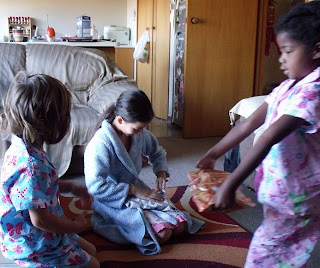 Then it was Ruth's turn.
She helped make the girls a "bean bag" each (although it's filled with wheat). 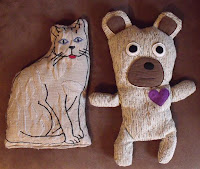 Hannah was thrilled and immediately asked for hers to be warmed up in the microwave. It was nice that she knew exactly what it was as we had used Ruth's own one as a pattern and so it obviously looked similar enough to her that she knew what it was for. Rachel was pleased with her cat too. 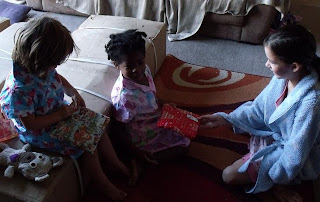 Then it was Rachel's turn. 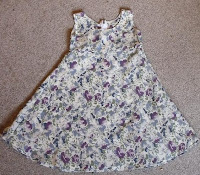 The girls were so pleased with their dresses and put them on immediately. It took Brendon quite a bit of convincing to get her to change into jeans for the day and leave the dress for church tomorrow. At least the girls got to show Nana and Grandpa their dresses before they changed though. 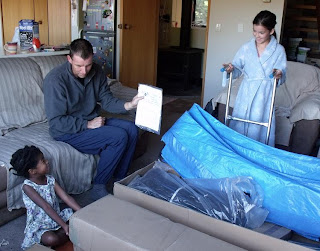 We suggested Rachel open "her" box first and Brendon searched for the instructions so that he could find a picture to show Ruth. She was so excited to see that it was a trampoline.
Then it was time to chat to Nana and Grandpa. The girls showed them all their gifts and sang them a Christmas carol. It was lovely to get to chat with Brendon's Uncle and Aunt who were staying with his parents as well as his niece's daughter.
We headed down to get breakfast for the younger two as Brendon, Rachel and I had been up earlier and had already eaten. But Ruth was just so excited about putting the trampoline up that they ended up just having a biscuit so that we could get started. 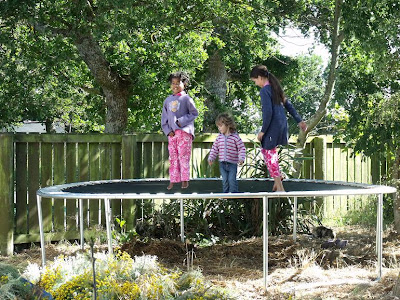 The instructions were not that great but we managed to work really well together (the girls even help carry and pass different things) and by 9:30 we had the trampoline itself up. We allowed the girls to have a little jump and then headed in for morning tea. 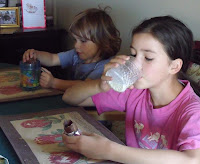 Morning tea for the girls consisted of chocolate (still left over from their gift from Bob and Lynn) and a glass of fresh milk. I can see this becoming a favourite. 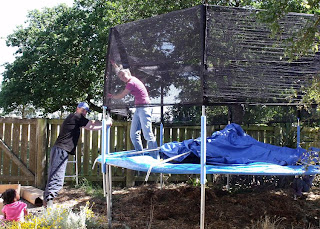 Then we headed out to get the net and canopy up. Not as easy as it sounds. The net is very tight (so that it can work well) and the canopy was incredibly heavy with the material on - so although it seemed it would be hard to get it on afterwards it was the only choice and that was left off at this stage. It was hard enough getting the canopy frame up. The girls enjoyed helping where they could and playing around. The boxes were used in wonderful imaginary games and Hannah enjoyed swinging from the trampoline frame (if you double click on this photo you will spot her swinging on the right of the photo). 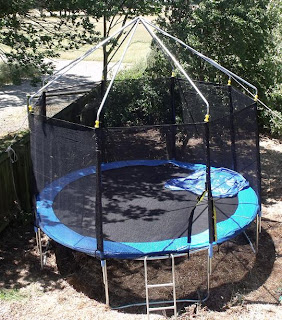 I think we did really well to get it to this stage by lunch time. While we got lunch ready the girls enjoyed jumping. I was again so thankful for the wonderful way Brendon and I work together. The instructions were very minimal and so we really had to work things out on our own. 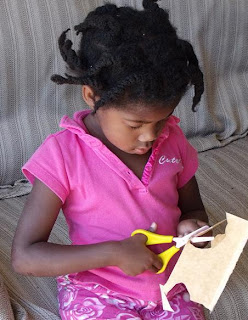 The advent calenders from Nana were finally finished today - so after lunch the girls cut out the games that were on the back.
Lunch was bacon and eggs (more precisely eggs and ham - but not green). Josie had sent some ham home with us yesterday and so we fried some of that up with mushrooms, tomato and eggs. Oh how I love all those things with my bacon and eggs. Brendon and Hannah join me with the mushroom and Ruth joins me with the tomato - but I am the only one with it all on my plate and I think I enjoy it the most. So it was a quick and easy meal but so yummyyy. 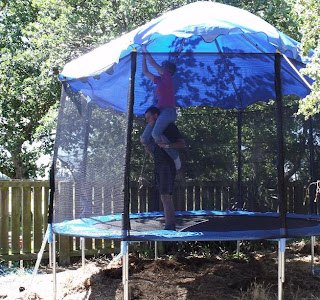 Brendon was a little nervous about tackling the canopy this afternoon as it was still quite windy. I had an idea of how to do it though so I asked if we could just give it a try. If it did not work straight away we could wait till another day. It worked though - and the canopy is on.
When we first got the frame up we had to take half the 2nd poles out. So in order to get those extra ones connected again Rachel got up on Brendon's shoulders. The Velcro straps on the canopy material however were even higher and so the only way to reach them was for me to get on Brendon's shoulders. It really was a huge team effort to get this all done today. It was a very enjoyable day for us all and we thank the Lord for the time we spent as a family doing this for the girls. I have very special memories of the hole that my brother and I spent our December holiday's digging one year when our Christmas present was a trampoline. So even though it was a day of work today I think it was a lot less work (especially for the children) than what my childhood trampoline was.
Posted by Buckland at 6:00 PM

How exciting for the girls, Belinda!! And a brave move for you considering our pre-camp conversation :) This one looks much safer though with the net. My boys spend hours and hours on the tramp, sometimes just sitting chatting to each other. I have no doubt that your girls will do the same - under, on it, around it - it's awesome.