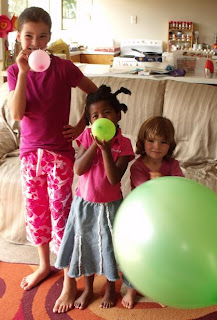 I got a call from Brendon this morning asking that I make an appointment with the chiropractor as he had slipped in the rain while loading the pigs this morning and hurt his neck. Thankfully he could see her at 11 so we got ourselves sorted and headed into town. Again it was such a blessing to get relief from pain so quickly. Brendon did not even tell her where he was sore (he waited and wanted to see if she asked him). She did however find 3 places on his back that needed adjusting and he felt better immediately. He even told me on Saturday that his back was even better than it had been before he hurt himself (he specifically noticed as his work vehicle does not have a review mirror and he normally has to turn his whole body to look behind properly - on Saturday he could just turn his head). The girls were pleased with the presents they got to choose at the chiropractor. The older girls ended up with very noisy balloons (as the air comes out the balloon it makes a terrible noise through the valve) and Hannah got a HUGE balloon with the elastic on the top. I remember these from when I was a child as so quickly put some dry rice in before Brendon blew it up for her. She had loads of fun with it until she walked outside and it popped on the grass. :( At least one of the noisy toys is gone though. :) 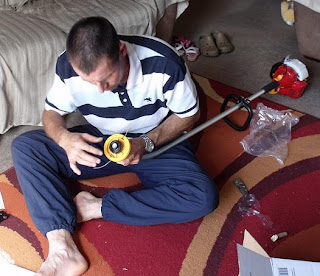 We enjoyed Pizza for lunch (we were amazed at the order of over 30 pizzas that the lady got ready before us) and then managed to get a little big of shopping done too. Rachel was in need of some shorts (the ones she has been wearing have been threatening to burst at the seems for a while now) and she was very pleased when we found these (top photo). Hannah was absolutely THRILLED with her new panties. Up till now she has just been wearing hand-me-downs from Ruth but her smaller ones are just too small now and so she needed a few more (as Ruth still fits in all of hers and does not have any to hand down).

Brendon has also needed a line trimmer for a while as his electric weed eater just can't reach everywhere in the garden (even with every extension cord in the house - and we have a few). So he got that set up today although just spent the rest of the day resting and putting ice on his neck and back. 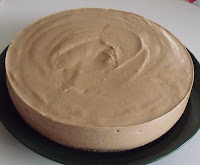 And as I did not have to cook food today (after a big lunch of pizza) I had enough energy to get this chocolate cheesecake done that I have been planning for. I found the recipe on-line and wanted to check it out before making it to take to friends on Friday. It was yummyyy. I will post the recipe after I make it again for Friday.
While we were out the trampoline that we have bought for the girls Christmas present was delivered. I was very glad they left the 3 boxes at the back door and did not insist on having a signature. I had been waiting for it to arrive since Wednesday and phoned them this morning to let them know we would be in town. I was relieved to see it there when we got home. But now I am so excited for the girls. It's so funny to be feeling like this. It's going to be hard this week to know it's there and we have to wait till Saturday to give it to them and set it all up. :)
Posted by Buckland at 8:00 PM