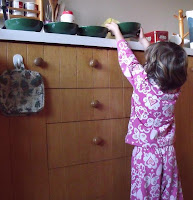 Firstly I wanted to tell you about my little helper. Hannah insists on getting the bowls out for breakfast every morning and will count them to make sure she has the right amount. She still has to reach way up to get them on the counter but don't you dare try and help her. She so enjoys helping and doing things on her own. 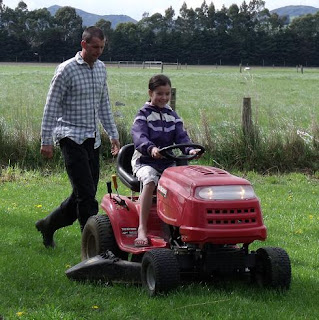 And Rachel is still too short to reach the break on the ride on. Brendon allows her to ride it from it's parking space at the sheds to our lawn but then he has to hit the break to get her to stop. She is so looking forward to being tall enough to cut the grass herself. It's a far nicer job than raking. And unfortunately it's not designed to have a catcher on it. It was such a great bargain when we bought it that we accepted the raking as part of cutting the grass. It sure beats using a push mower when you have enough lawn for 3 tennis courts. 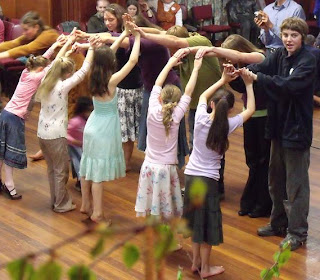 And then it was the highlight of the week for the girls. A barn dance. The girls have been talking about the party that we would be going to tonight and have been looking forward to the dancing. It was so nice to have the little ones included too. Everyone was very patient and I think were surprised at how well the young children did. There were a couple of Israeli dances at the beginning (the one Israeli dance was Rachel's favorite of the night) and then the barn dance. On the first song Hannah even went off on her own. She got quite a way around the circle but eventually found the swinging around from some of the boys was just a bit too much and so she stayed in arms most of the time from then. Rachel and Ruth really enjoyed themselves though and were off dancing away. I got quite a bit of dancing in myself (I have such fond memories of barn dances when I was a child) and so it's thanks to Brendon that we have a photo and video clip.

Unfortunately I had not told him before about taking only short video clips. And he also just missed the really fun dancing part with the girls. But it's a good reminded of the fun that we had. I am sure it will be remembered for many years to come.
It was a special 50th birthday celebration and my friend (who has 8 children) had organized for herself and husband and a couple of the children to do a few music pieces. I was so surprised when she pulled out her violin. It was so special for Ruth to see her playing a violin as Ruth is very excited about us picking up her violin within the next week or two.
Posted by Buckland at 10:00 PM