Tooth and nail (or needle)

﻿﻿﻿﻿﻿﻿﻿Rachel has had a loose tooth for a while now and really wanted it out this morning. She just could not grip it though so I suggested using my kitchen gloves. No success though. 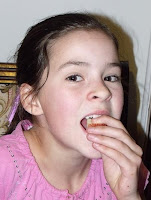 This evening she decided to try get it out by eating an apple. She had already eaten quite a few pieces with no luck so eventually she placed a piece right over the tooth and slowly bit into it. She was so pleased that it loosed it enough for her to just pull out. 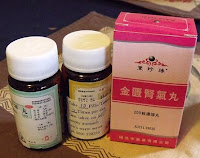 We went into town for church again today as I had an appointment for acupuncture in the afternoon. Although I have good movement in my neck after hurting it the muscles are all still very tight (as well as my lower back). She also gave me some herbs for my tummy which has been playing up a bit lately. We chatted to her about Ruth's low energy levels and sore feet and legs too. So Ruth had some acupressure (no needles) - basically a full body massage and got some herbs to hopefully help give her more energy.
Note: Writing this almost a week later I can say that my herbs have done a wonderful job on my energy levels. Every morning since Sunday I have been waking up early and feeling so well rested. She had asked how I sleep and Brendon had said "not well". I generally struggle to get to sleep so I have had a really good week in that regard.
Posted by Buckland at 7:00 PM