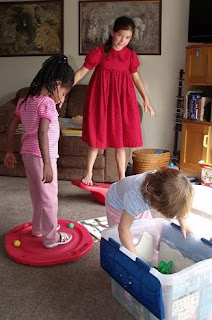 Toy Library and Music and Movement again this morning. I got a couple of nice toys for the girls and then noticed this big blue bag. I looked at the picture and saw these balancing games. The girls have already had so much fun with them. I got a nice big box of lego for Hannah and I even found some Humpty Dumpty puzzles (actually a game with puzzles) for Ruth. She has been wanting a Humpty Dumpty puzzle for a while so she was really excited about that one. :-)

On Wednesday I started something new with Rachel. There are things that she needs to do every day and then a list of things we would like to get to at least once a week and I just did not know how to create a schedule that helped us get to things but still gave us the freedom we want. So I came up with this idea. Numbers 1-10 are the things she needs to do every day and numbers 11-18 are the weekly items. As she gets things done the number gets written up. It's a great way for us both to see what she has done in the day (and what still needs to be done) and a great reminder of those weekly items we would like to get to. So it's really working well for both of us. 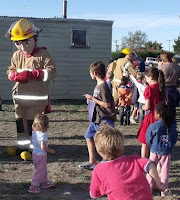 The fire brigade and St John (the ambulance service) organized a fire and safety awareness evening today. They have fire safety adverts on TV with these "characters" and so the children were excited to see these big faces. It was so funny to watch Ruth and Hannah as they have never seen anything like it before.

The line on the right of the first picture is for walking through the "house" which is filled with smoke. A simple exercise to help practically explain to children how important it is for them to stay low if there is smoke. 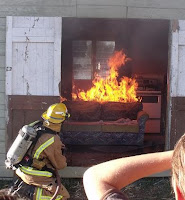 Then they even lit a couch to show how quickly the fire spread. 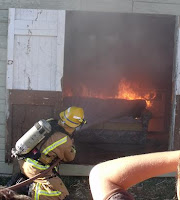 It was interesting to watch how they put it out. Aiming the water at the ceiling. 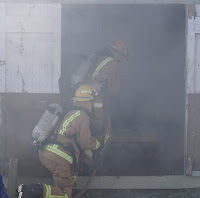 And going in to make sure it was completely out. The amount of smoke from that small fire was incredible.

They also set up scenarios of different accidents and explained what the fire brigade and ambulance team do on the scene. Rachel kept saying "they are such good actors". They even had a chain saw accident. 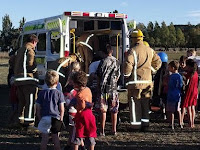 Getting the children familiar with the ambulance.

Taken at 7:45. We don't often get to see sunsets at our place because of all the trees - so it was really beautiful to watch this evening. 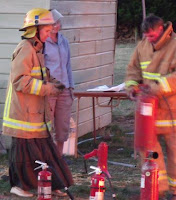 They were giving all the adults turns in using the fire extinguishes. So I got kitted up.

Shown how to use the first kind - the dry powder. You really have to spray it onto the top and let it cover the fire and stop the air from feeding it. I was pleased that I got the angle right and got it out quite quickly.

And then I had a go at the other kind. Sorry I don't remember the name. You have to get a lot closer to the fire with this one and they really do work very differently. I got it out quickly too though.

Then it was Brendon's turn and he ended up getting a fire extinguisher that was almost empty on his first attempt and it just would not go out. He changed bottles and got it out so quickly.

And he was so quick with the 2nd type that the fire was out before my camera had clicked.
We were amazed again at how the Lord has been working in each of our hearts on the same think. They obviously asked if there was anyone interested in joining the brigade and so I asked Brendon if he had thought about it (because I had wondered about it over the last 2 or 3 weeks) and he said he actually had been thinking about it previously. So he gave them his number and will chat about how he can help.
Posted by Buckland at 11:06 PM