"Now in those days John the Baptist came, preaching in the wilderness of Judea... For this is the one referred to by Isaiah the prophet (Isaiah 40:3), saying 'A voice of one crying in the wilderness, make ready the way of the Lord, make His paths straight!" Matthew 3:1,3

The girls all had a great time taking turns being the forerunner (like John) who would run in ahead and tell everyone to get ready because the King was coming. Mom and Dad did it first so that they knew what to do.

This morning I decided we would tackle our Christmas biscuits. Ruth and Hannah just love helping and Hannah is learning how to take turns which is great. 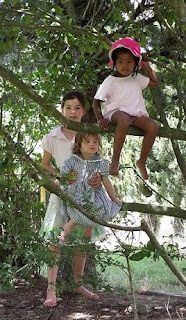 We had a picnic lunch and enjoyed watching the kittens playing around these trees. So for the first time Rachel is looking around at trees and thinking about which ones could be climbed. 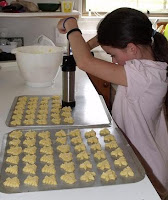 Once the little two were in bed Rachel and I started on the baking. The cookie cutter was working really well and so Rachel even got to make a few. But when they were in the oven she said "they look like they are melting". And that is just what happened. I had doubled the recipe but forgotten to double the flour. So they were way too soft and just melted.

Melted first 2 trays - bottom left.
Corrected dough Christmas trees - bottom right. But these were just taking so long again. Every year it's hard work, but this year it was just too much. In the 8 min that a tray would bake I would not even have 1 tray ready. So I decided we would break with the Christmas tree tradition this year and do stars instead. Rolling the dough out and using a good old fashioned cookie cutter worked so quickly.
So we ended up with 300 stars (for the gifts),
100 trees (for visitors) and
almost 100 melted crispy biscuits that Brendon is already enjoying. :D 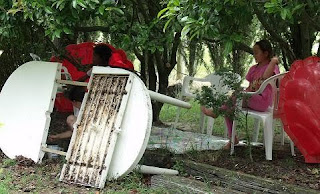 While I baked the girls played outside with a "new friend". The owners had organized for someone to come and clean out our flower beds for us (which was so appreciated as we have just not gotten round to them) and they had brought their daughter with (far right). Rachel built a house for them there and used the garden table as her door (you can just see her at the 'door').

There was so much to clear out they filled the back of their ute with all of it. 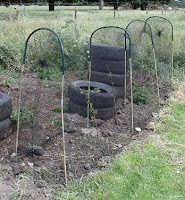 Once my baking was done I helped Brendon get the netting up for the raspberries. We already have a few red ones - so this will help protect them from the birds.

Smoky looked so cute sleeping in this sunny spot. 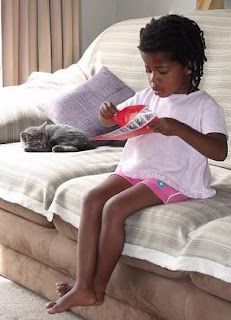 They girls were excited to receive their Christmas cards from Nana and Grandpa today. 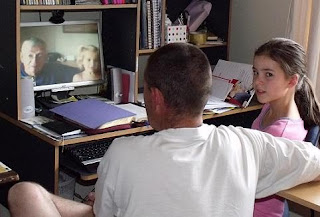 And although we always speak to them on Wednesday evening, we had another chat with them tonight because Caylin (Brendon's niece's' daughter) was visiting them. She also just had a Ballet concert and enjoyed chatting to Rachel. Ruth was also glad to be able to thank Nana for her "lovely" card. 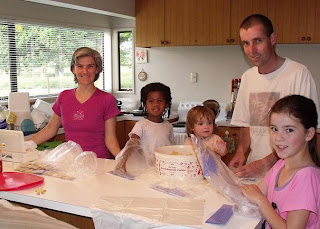 And then it was time for the Buckland Biscuit Factory.
Rachel puts the cards in the packets, Ruth and Hannah (with Dad's help) but biscuits in the packets and then I seal them.
I think Brendon had the hardest job but he said Hannah learnt very quickly and did a good job. I think she only broke one or two. Ruth also did such a good job and can count to 4 really well now. 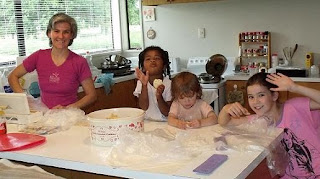 I was getting a bit behind (they were working so fast) that I suggested a biscuit break. So they ate the few broken ones and then we finished up. My sealer stopped working with only 3 packets to go. It is probably already over 10 years old, so it's had a good go. I will have to make sure I get a new one before next Christmas. 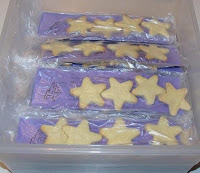 We made 75 packages. Brendon will take 50 to work tomorrow as there are almost that many people working on his farm. We all love this family tradition and it gets more fun every year. It's been at least 5 years now that we have made them and I think it will be something we do for many many years to come.
Because we had stars this year the verse on our card is Matthew 2:1-2 "Now after Jesus was born in Bethlehem of Judea, behold magi from the east arrived in Jerusalem, saying 'Where is He who has been born King of the Jews? For we saw His star in the east, and have come to worship Him.'"
Posted by Buckland at 11:55 PM