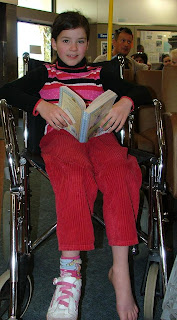 Rachel went to youth group again last night (the highlight of every month for her) but unfortunately had an accident when jumping onto the gym mats. Her left foot slipped between two mats and her ankle got badly hurt. She was in so much pain. Driving home was so painful for her even though she was holding her foot up, every bump caused her to complain in pain.
So off we went to the hospital this morning (Dad stayed at home with the younger two). I had phoned the medical help line early this morning and they suggested I take her to a doctor this morning. There was an overlap between the two weekend doctors on duty and so by 9 I got a call back and the doctor said I should just take her straight to the hospital. Unfortunately this was not the perfect solution, we should have stopped at the Medical Centre in Amberley on our way for a referral (the doctor was already there). As it was we had to wait here for a little while before getting a referral for the x-ray department. By this time it was already 11:20. There were a number of people in this waiting room - so that got us wondering how long a wait we had. 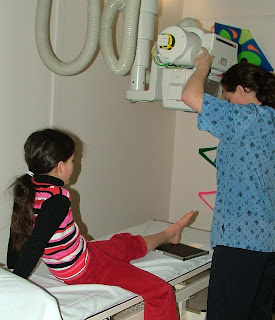 Thankfully there were not too many people at the x-ray department. By 12:30 she was having the x-ray done.
Unfortunately they were busy putting a cast on a broken ankle, so it took them a while to get to talk to us. At one point I just asked if it was ok for Rachel to eat something. All the signs say "don't eat or drink anything until you have seen our doctor". So we got the go ahead for her to eat something as by this stage she was feeling rather ill due to the empty stomach.

Thankfully the bones were not broken. She had just badly damaged the ligaments. They did not have any small crutches left - so she was given a walker (which got some teasing from Dad when she got home). We all decided that it was actually better than crutches though as it really helped her to be steady. They also gave her some pain killers and the whole exercise only cost us the $3 for that script (even the rental of the walker did not cost us a thing). So although we did have a little wait (being a government hospital) we were also very thankful for good care and the wait was not all that long. By the time we got home Rachel was actually able to hop with the walker. This morning she had crawled around because hopping was even too painful.
RICE was the only recommendation (Rest Ice Compression and Elevation). I mentioned to the doc that she is supposed to have a Ballet exam in 2 weeks and he said that it might be possible for her to be able to do it. He also said that within a couple of days she needs to start moving the foot so that it does not get stiff. It was hard for her today to just bring the foot into a 90 degree angle. She does realize how important that is, but she is in a lot of pain.
Posted by Buckland at 1:26 PM