We had seen a hare run past the glass door the other morning. Well, today we saw three running around the place and it was really hard to get a photo of them. Here is the best photo of one in our veggie garden. But they don't sit still for long.... And they are really huge. They are at least 40 to 50cm. So while we had rabbits at the old place, it's hares here. Apparently they are less of a problem with the veggie garden - so that was good to hear. 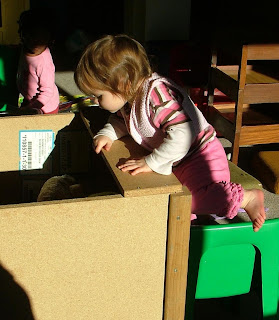 Our old wood box is now a big toy box. It did not take Hannah long to bring a chair over to have a look inside. 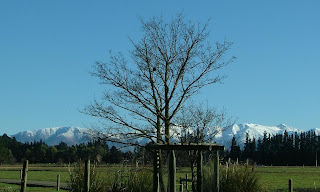 It had been overcast yesterday and Brendon had said it had gotten really cold in the afternoon. We had not noticed because we had just stayed inside. But today with such a beautiful clear sky, I could see why it was so cold yesterday. There is quite a bit of new snow on the mountains. Just last week I had noticed that the mountain to the left had NO snow on it and on the bigger one you could actually start to see brown. But the days are getting warmer and I am sure it will all start to melt soon. 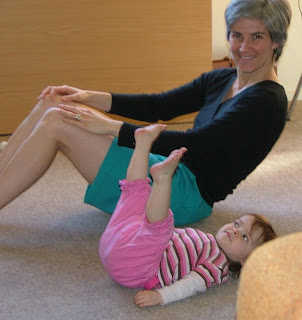 Ruth was exhausted today and headed for her nap early (just before 12). But as Hannah is not normally ready for her nap before 1, I brought her upstairs and she joined me on my workout. It was so cute. Rachel just needs to practice a bit more at taking photos. :D 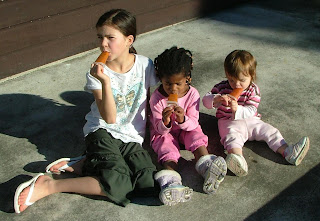 The girls enjoying their afternoon icy (made from fresh fruit & carrot juice) in the beautiful sun. 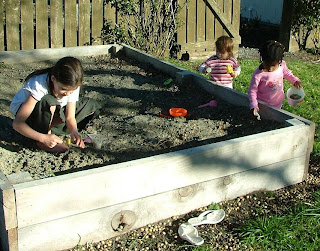 And it did not take them long to make their way over to their new sandpit. I can see that they will spend many hours in there over the next few months.

A friend had gotten me signed up with a company that send Mom's free samples. I get e-mails with specials and last week I got one that gave us a months' free video rental. We can get 3 DVD's at a time and there is no limit for the month. They post them to us (free of charge) and include a postage paid return envelope. So we will be enjoying many totally FREE movies for the next month.
Rachel enjoyed watching "A Little Princess" last Friday. Having read the book at least twice it was really fun to watch the movie.

On Saturday the family watched Beethoven together. Rachel has a teddy dog that we had named Beethoven after this dog and so finally (after doing a study on the composer Beethoven) she has gotten to see the movie. I think it is all a bit confusing for Ruth though - the dog and the composer.... 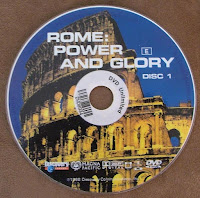 And this week Rachel has started watching a DVD on Rome. It has been lovely to see so much of what we learned when she did her Ancient Rome unit study. Even though it was a little while ago now, it was great for Rachel to be able to recognize a lot of names and places.
We are also very thankful for the Portable DVD player that Ruth won as some of the DVDs are NZ region only and so we plug the portable player into the TV and don't have to watch those on the computer.
Posted by Buckland at 2:25 PM