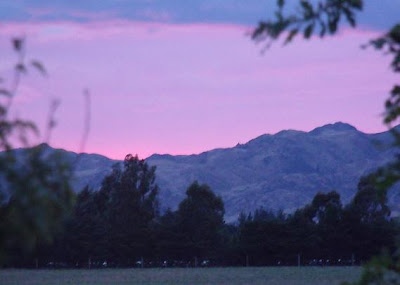 Beautiful colours in the sky this morning. But also a very clear indication that we are moving further and further away from summer. This was taken at 6:30 and as you can see - the sun is not up yet. Brendon's work starting time has already changed from 6 to 6:30 and I don't think it will be too long before it's 7. 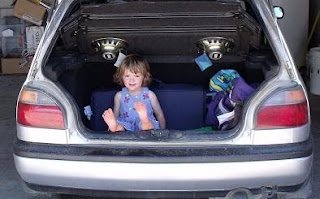 I had Guiding training in town all day. I left just after 7 so Brendon had the girls the whole day. In the afternoon though he took the little two to the Sterns so that he and Rachel could meet me in town for the rugby. Thankfully I traveled with someone - so I just had to meet them in Waikari and we did not have two vehicles going to town. 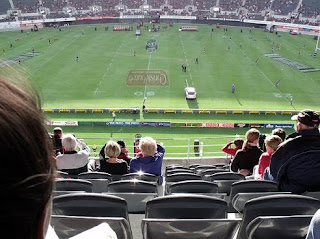 We were excited to see that the tickets we were given were for seats in the new stand. It felt so steep when we first arrived but we got used to it really quickly. I took this photo at 7pm, just before the sun dropped below the cover of our stand. So the days are still rather long. There was a lot of cloud around though - so soon after I took these photos it got really cold again. The advantage was that we did not have the sun in our eyes. 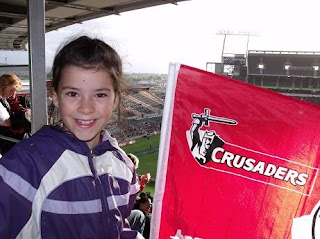 Rachel was pleased with the flags they handed out today. 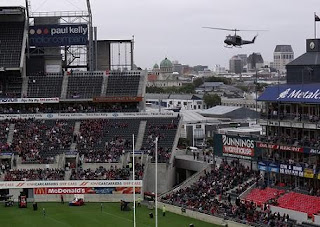 We saw this helicopter fly over but Brendon noticed some army personnel just off the field so we wondered what was going to happen. It was exciting to watch it come right into the stadium. 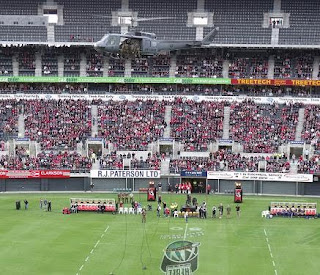 It was incredible to see how very still it was as it hovered over the pitch. We watched the men get ready and then then absailed down onto the field.
Then it was Rachel's favorite time - the horses. First the black horse (they all come out of the castle in the corner there).
Then the crusaders ride out and around the field. The music is just lovely.
On the second time around they stop at each section of crowd and get such a response.
Rachel enjoyed the Mexican wave a few times. We had a lovely evening and the bonus was that the Crusaders WON! Rachel was so pleased. 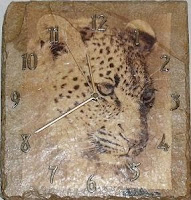 It was almost midnight when they got home. So it was a very long day. I was out for over 16 hours.
Posted by Buckland at 12:47 PM

Beautiful colors in that sunrise, wow God is such an artist!